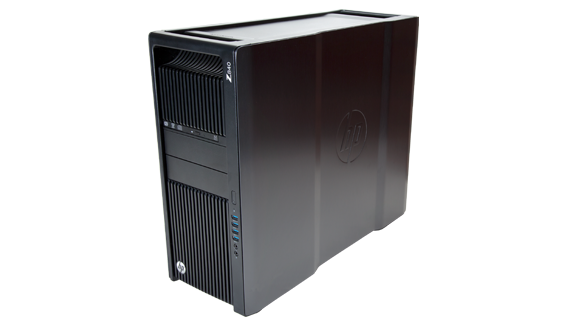 Video editors, rejoice! Hewlett-Packard has come forth with their new HP Z840. Released in August of 2014, the Z840 is built to expand to meet whatever you would like to throw at it. With up to 36 cores, seven PCIe slots, 10 internal drive bays and 16 memory slots supporting up to 2TB of memory when 128GB DIMMs become available in Q3 2015, there should be very little this top-of-the-line workhorse can't handle.

Due to the potential upgrades and serviceability of the Z840, the tool-free chassis is quite heavy compared to competing video editing workstations. However, the benefits outweigh the drawbacks. With ease the user can switch out memory, CPUs, drives or video cards with the click of one or two tabs. The internals are protected with strategically placed plastic covers which keep the airflow efficient and directed to where it is most needed. The processors are cooled with multiple fans directing air to and away from each of them. With each processor having its own fan as well as three exhaust fans on the side, two chassis mounted rear fans and an additional two fans to direct and vent air away from the chassis, the processors and internal temperatures are kept incredibly cool and stable, contrary to what one would think based on the amount of processing power the Z840 flaunts.

Using strictly Intel Xeon processors, the HP Z840 hits processing speeds of up to 3.4GHz with the Xeon E5-2643 processor with six cores and 20MB cache or an incredible multi-core setup with the Xeon E5-2699 v3 processor clocked at 2.3GHz with 32 cores — 72 threads — and a 45MB cache and everything in between. With 19 different combinations of processors, the end user is able to meet their needs whether it be cost, performance or a mixture of both. These processing speeds and the ultimate amount of cores used in processing provide the finest in video rendering and exporting and can handle whatever you might demand of it.

In our test unit, the dual Xeon E5-2640 processors were tasked with everything we could throw at them. At one point we decided to be a little unfair and stream four 4K ultra high definition videos all while using our internet browser, Hyper-Pi benchmarking software, which calculates Pi to 32 million integers using multiple cores, and exporting a high definition movie from Adobe Premier Pro. Like we said, it was unfair. Though we saw the unit stutter and pause briefly, it flexed its muscles and took off again to complete our tasks.

The video production workstation to beat, the HP Z840 offers top-tier performance for the video professional.

Our only complaint with this review unit was a few times where the applications would hang while opening. Looking into it further, it might have been due to software issues rather than the unit itself. Running Windows 8.1 Pro we were able to run most applications, but needed to use compatibility mode for a few others. This may have been the issue we ran into and we are looking into it more to determine a final answer.

During our “fair” testing we used Adobe Premiere Pro to render and export full HD video, while simultaneously watching two 4K UHD videos as well as two 1080p videos. During this process there was not one bit of lag and the videos played smoothly. The video rendering and export completed amazingly fast and every other direction we gave to the HP Z840 was met with immediate results. This was not only due to the Xeon processors, but also to the incredible NVIDIA Quadro K5200 GPU. At 8GB of GDDR5 256-bit memory and using the Kepler architecture with 2,304 CUDA cores, and memory bandwidth of 192 GBps, the K5200 was a perfect addition to  the Z840.

On 3DMark’s Cloud Gate 1.1, the Z840 had a physics score of an astounding 23,878 which was unreal, especially compared to a high-end gaming desktop which would score closer to 15,000. In Call of Duty 4, frame rates of 99 fps were obtainable at full resolution. Benchmarking tests used were Unigine Heaven 4.0, 3DMark 11 (Cloud Gate and Fire Strike), Call of Duty 4 using FRAPS for fps benchmarking, and Cinebench 11.5 for multimedia testing.

With these results, we could see that the combination of the multi-core Z840 with the NVIDIA K5200 was an excellent match. NVIDIA has consistently demonstrated their advances in GPU technology over the years, and the Quadro K5200 is just a perfect example. Utilizing their NVIDIA CUDA Architecture — a parallel-computing architecture — and Quadro Digital Video Pipeline, NVIDIA brings the K5200 to the forefront of their high-end GPU offerings for video editing and processing. The K5200 is the replacement for the K5000 bringing with it a significant update with faster graphics performance, faster computing, and twice as much frame buffer memory. For the ultimate in workstation performance, the K6000 brings 12GB GDDR5 384-bit memory and 288 GBps bandwidth. Also, a unique benefit of running the Quadro is the ability to utilize its Quad display — transparent scaling of the desktop and applications across up to 16 displays from 4 GPUs.

One area to delve into for video production is NVIDIA’s Quadro Digital Video Pipeline technology. This technology is the only one available providing real-time acquisition, processing and delivery of high-resolution video across standard and 3D video broadcast environments. By providing up to four HD video streams into a single GPU, video production enthusiasts and professionals can create advanced video with real-time previews. Though utilizing this system demands the use of an SDI Output card and an SDI Input card, the hardware and software fully integrate to provide the most seamless and stable combination to provide professionals with the video editing ability they are seeking.

Hewlett-Packard went all out on this one. With ultimate upgradability, we opted for two processors using the Intel Xeon E5-2640 v3 — 2.6 GHz, 20MB cache, 8 cores. With this configuration we were able to fully meet the needs of the majority of video production users. Optional Thunderbolt 2 technology provides for the connection of fast external peripherals for transfer speeds up to 20Gb/s. For video rendering and post-production, these speeds will help in obtaining your desired goal quicker than USB and with greater stability.

The PCIe-based SSD is head and shoulders above SATA 6Gb/s when it comes to throughput for the professional video producer. A PCIe x16 SSD is capable of 80Gb/s throughput instead of 6Gb/s. When working with 4K video, most videographers would use multiple streams in production, therefore blowing past the 6Gb/s limit. However, a PCIe x16 will produce even more than 10x bandwidth than that of a SATA 6Gb/s. Because of this, multiple streams may be integrated into production, especially when using multiple core processors.

Fast. Stable. Expandable. Everything you need for professional video editing. While using PCIe SSD for storage, 2TB of DDR4 memory, and a NVIDIA Quadro K5200 for blazing fast graphics,  it would be hard to find a machine to top this workstation. Though fairly large and heavy, this workstation is exactly what is needed to make video production fast and hassle free. Starting at $2,399 and heading upward of $60,000 for the best of everything, the test unit was all we would need to be happy with production, and prices out at about $8,000. When upgrading processors to meet the 32-core option, the price starts to dramatically rise. However, our 16-core test unit produced the results we expected, and more.

Hewlett-Packard has created a beautiful workstation to meet the needs of anyone who may be venturing into video production or a Hollywood studio expecting the best available. Using the enormously expandable options, the user can specify exactly what is needed while balancing cost and performance.