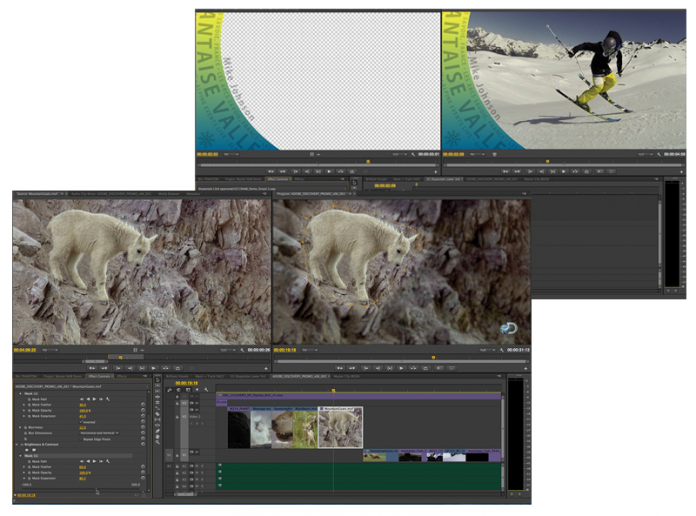 The majority of Adobe’s updates to the video apps surrounds the use of Adobe Premiere Pro CC as the central editing hub for the Adobe video workflow. Adobe increased the efficiency and reliability of the dynamic link between Premiere Pro and the other video applications, such as Adobe After Effects CC and Adobe Speedgrade CC. New features and increased functionality for common tasks were added into Premiere Pro CC to decrease the amount of round tripping needed between Premiere Pro and the other apps. Likewise, the interoperability of tasks begun in Premiere Pro now carry over into other programs, such as After Effects, to increase the efficiency of specialized tasks that can only be performed in a particular program.

Another feature video editors will find useful are the new Masking and Tracking tools in Premiere Pro. Users can make a selection with a mask and have that mask track with the footage. New to the Adobe workflow is the ability to apply effects to the masked region of the clip. Meaning, users no longer need to stack duplicate footage when using masks and effects together. If a video editor needs to perform greater visual effects than what Premiere Pro can handle on a selected mask, the clip and mask can be sent to After Effects CC for further and more developed work.

The new Master Clip effect feature allows the video editor to apply an effect once to a master clip and that effect will carry over to each instance of the clip in use throughout the editor’s timeline. Features such as this, and the increased efficiency of the direct link between Premiere Pro CC and programs like Speedgrade CC, definitely give the video editor more time to work on their projects as opposed to wrangling their tools.

Adobe After Effects CC 2014 received several upgrades to improve performance and efficiency, as well as a couple of new tools. Most notably is the increased integration with Adobe Premiere Pro CC. Users can assign text layers to be Live Text fields when imported into Premiere Pro.

A feature that is now found in Premiere Pro is one that is now also found in After Effects. Users are able to assign effects to masks on a piece of footage. In the past, users would layer up duplicates of a single piece of footage, create masks for selecting specific regions of the clip and then apply the effects to only the masked layer. Now this type of operation can be performed on a single clip with multiple masks and multiple effects. Moreover, a mask generated in Premiere Pro can be brought into After Effects for further adjustments and more effects through the Premiere Pro interchange.

The 2014 update is filled with new tools and workflow improvements across all of the Creative Cloud applications.

Visual effects artists receive some new tools with new keying effects, such as the new effects, Key Cleaner and Advanced Spill Suppressor. Key Cleaner helps to fix problem areas when performing a chroma key, especially in detailed regions such as hair. The Advanced Spill Suppressor works like one would hope, removing chroma spill from a chroma screen.

For some time, Adobe After Effects was in need of a color swatch panel, especially for motion graphic artists working with type and shape layers. After Effects CC 2014 now has that with Kuler integration. This is accomplished through the new development of  HTML5 panels in After Effects.

Other updates include updates and improvements to the popular Curves effects. There is also TypeKit integration as seen in many Adobe Creative Cloud applications.

An important upgrade for video editors is the enhanced video scopes, as well as the new YUV Vectorscope. These allow the editor to have a more technically accurate reading of the changes they make to footage through the color correction process.

The upgraded Adobe Creative Cloud video applications were tested using an older system. A 27” iMac with a 2.93GHz i7 processor, 12Gb of RAM and running Mac OS X (10.9.3). Each of the new features, as listed here, were tested on various HD clips.

Everything worked as it should without any hangups except for the Dynamic Link between Premiere Pro CC and After Effects CC when working with Live Text templates. The Live Text templates feature did work and was easy to understand, but it had a tendency to lag whenever there was an edit to the text. Rendering with the new effects and features didn’t create any unexpected delays, in fact, timelines rendered quickly as would be expected. The Dynamic Link between Premiere Pro CC and Speedgrade CC was quick and efficient. Tracking in Premiere Pro CC was much faster and more accurate than was expected, making it a nice efficiency for the video editor who needs to blur out a face or color correct only a small portion of a clip.

The new chroma key effects in After Effects worked well in cleaning up a key of ProRes 422 HD footage. Traces of loose hairs remained intact while the green screen disappeared. The new masking effects were easy to apply and kept the timeline neat and orderly. The integration with Kuler worked flawlessly and synced directly to the host Adobe account’s Kuler profile.

Speedgrade CC worked well with Premiere Pro. The new Master Clips effect allowed for a stylized look to be applied in a couple of simple clicks, saving lots of time.

The Adobe Creative Cloud 2014 Upgrade doesn’t disappoint. It’s a well thought out integration of the various Adobe tools across their entire spectrum of applications. The new method of versioning within Creative Cloud answers many questions for users concerned with interaction across multiple generations of workstations. The strongest and most notable upgrades of this release are present in Premiere Pro CC. It appears the approach Adobe is taking with their video apps is one of a fully integrated suite, positioning Premiere Pro CC as the central hub. They continue to build upon their base programs, Premiere Pro and After Effects, while expanding their capabilities for specialized tasks, such as those performed in Speedgrade.