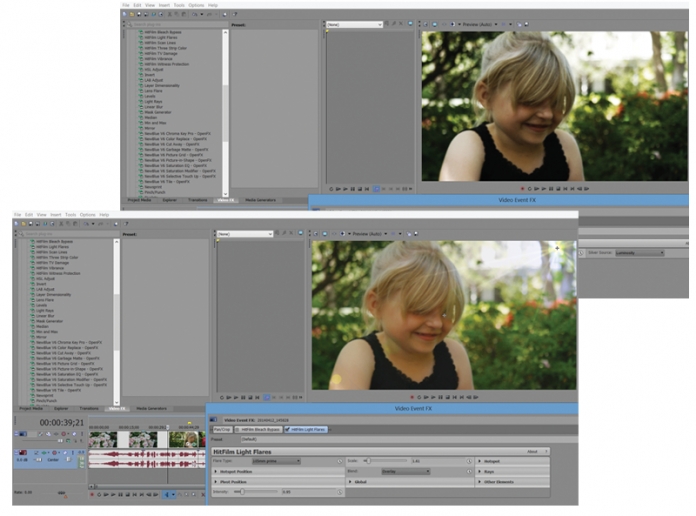 A wide array of video editing software programs dot the post-production landscape these days. They may be simple, inexpensive programs that pretty much do everything for you or they may be very sophisticated and powerful with steep learning curves and a price tag to match. One thing Sony Creative Software has managed to do quite well with their Vegas Pro editor is balance a powerful feature set with a beginner friendly interface and workflow, and a wallet friendly price.

Sony Vegas Pro 13 is a timeline-based editor that is fairly easy to learn and use. If you are already familiar with version 12 you will find that little has changed, except for the addition of a few new pro features, which we’ll cover later. Some of the functions formerly located on an upper toolbar have been moved beneath the Timeline, bringing oft used tools a little closer to the action. Five new edit tools are accessible from this new toolbar: Shuffle, Slip, Slide, Time Stretch/Compress and Split Trim. These functions were previously available via the keyboard but may now be accessed using clickable icons. A few improvements have also been made to project archiving wherein all the media files related to a project are saved into one location, included nested timelines.

The real differences lie in the professional features that have been added to this new version. Remember the good ol’ days of having to jockey the volume buttons on the remote control because the commercials would come on and blast you out of the room? Well, when an overly loud commercial interrupted a certain congresswoman’s family dinner a few years back, the result was a broadly accepted piece of legislation that became known as the Commercial Advertisement Loudness Mitigation (CALM) Act. Television broadcasters are now required to meet certain specific audio guidelines in their broadcasting or face penalties. To facilitate compliance with the CALM Act Vegas Pro 13 has introduced Loudness Meters.

Loudness Meters will be a valuable addition for those working in the broadcast market. The average levels of your audio are measured according to the legislated standard so you can easily conform it to the allowed range of loudness units prior to broadcast, saving the broadcaster from costly fines and yourself from an embarrassing re-do.
Advertisement

Also great for the broadcast market, Vegas 13’s Proxy-First workflow can offer some real time saving benefits. If you’re shooting with the right camera (XDCAM footage) and have a Sony Wireless Adapter you can record hi-res files to the in-camera media then wirelessly send lo-res proxies back to your editor, who can download and edit them, while you high tail it back to the station. When you get there, the edited proxy version can be re-linked to the hi-res files and rendered out just in time for the evening news. Pretty cool, huh?

Vegas Pro 13 balances a powerful feature set with a beginner friendly interface and workflow, and a wallet friendly price.

Vegas Pro Connect is an app that allows multiple iPad users to collaborate with one another as they review a project, placing notes and markers directly into the timeline. Offline mode lets them download proxies which they can then comment on in the same way and then later sync their proxy versions back to the master project. To more easily facilitate the process the app also turns the iPad into a gesture activated control pad.

Sony Vegas Pro 13 is a powerful, affordable editing program. If you don’t already have an editor or are currently using a less sophisticated program and would like to up your game, you can download the trial and take it for a spin. If you are a non-professional user and are already using Vegas Pro 12, then you may want to wait for the next update to come around. Except for the new pro features in version 13, not a lot has changed. If, on the other hand you are a professional user then check out the pro features and see what you think.