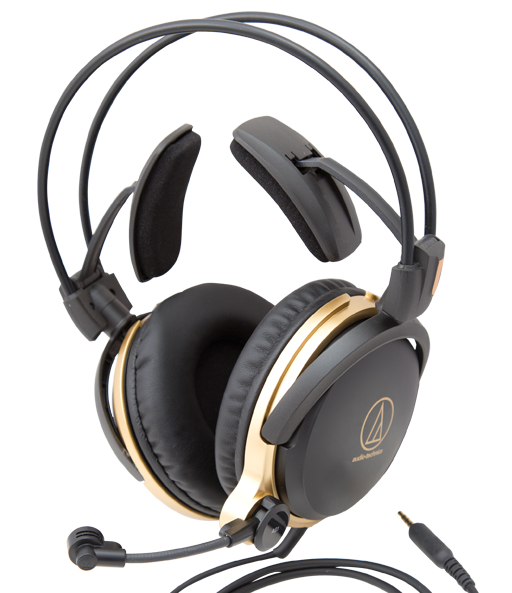 How do they sound?

The specifications of the ATH-AG1 headphones are impressive for sure. Even some DJ headphones don't have the specifications these headphones have. Bass response down to 5Hz, and an upper-range to 35,000 Hz. Compare that to an average studio monitor at 56Hz-22,000Hz, and you can't wait to hear what the headset can do. The massive 53mm driver units definitely fit a bass head's specifications, and you immediately imagine that you wouldn't so much be using a headset as putting your head between two powerful speakers. With a closed-back design, and soft, huge, cushy ear pads; a seal should be formed around your ears and produce mind-numbing bass, and block out most outside noise. Really, by the specifications alone, they should sound spectacular. The reality is, they don't. At $300, Audio-Technica clearly had to make a compromise between the speakers and the mic.

The marketing claims they are an audiophile gamer's dream. The unfortunate reality is that the ATH-AG1 doesn't sound any better than the Sony Hi-Res Stereo Headphones that sport a list price of only $150, and significantly less quality than the $180 Sennheiser HD 558. OK, so those are prosumer headphones, and don’t have microphones, so let's look at something more in the gaming market. The top-of-the-line headset we found is the $250 Ear Force Z Seven by Turtle Beach. The specifications aren't as nice, but the cans fit more snugly around the ears, and thus the bass response of the speakers sounds much better (and are a bass head's dream).

Even some DJ headphones don't have the specifications these headphones have.

The ATH-AG1 gaming headset does have good speakers, and you can hear the massive bass response, but it doesn't sound very bassy. When tested using a boom sound on an 808 drum kit from a Roland Fantom synthesizer, it becomes really evident. An 808 boom is that very bassy kick drum sound that is so common in pop music that it's even referred to in the song "Like a G6". The 808 sounded more like a toy. Why? Because without a good seal around your ears, the sound escapes, and although the low frequency response range allows the bass to be heard, it doesn't move enough air to resonate on your eardrums. This is why custom in-ear monitors are desirable. They don't have huge drivers, but the seal in your ear lets you hear bass. This sound leakage is probably because Audio-Technica went with a traditional round-design for the cans instead of over the ear headphones with an oval design. With the right seal around your ears, even an open-back headphone (like the Sennheiser) will generate a better bass sound, rather than just bass response. If they were priced around $100, the sound these headphones generate would be more than acceptable.

How do you sound?

We tried this headset with games from "Call of Duty" to the R/C flight simulator "RealFlight 7." In all the games we asked people how we sounded. The response was a resounding "um… OK I guess." Skype, FaceTime, WebEx — all the same "so-so" response. On recording (Pro Tools), it wasn't even passable as a voice-over mic, nor for any singing. We wouldn't advise anything but a studio condenser mic for voice-overs; but this is Videomaker, so we had to try, right?

With a frequency response of 100Hz-12,000Hz, the mic really isn't suited for high-fidelity capture, but for YouTube gaming commentary, it’s definitely usable. When comparing the quality of the mic to another gaming headset, the Steel Series Siberia V2, the ATH-AG1 was notably better. The saving grace is that the mic is far enough away from your mouth to eliminate "popping" the mic with consonant sounds.

Luckily there is a mute button for the mic in a convenient, but not bumpable spot. So, screaming out expletives can be held back from your teammates in games — major plus.

The USB DAC is truly plug and play. We tried this on a Dell XPS 8300 with Windows 7 64-bit. Within a few seconds of plugging in the USB DAC, the headphones were ready to go. However, after a day of use, a previously stable machine was suddenly crashing on the dreaded "blue screen of death." Even at idle. Upon investigation, the crashes were triggered by the existing sound card. After removing the sound card's driver, the crashes went away. So with some cards stuck using the USB DAC as your sound card, or using your sound card with only the standard 1/8-inch plugs.

Another point of strangeness, the headphones came with one audio cable extension cord. Well, they call it an extension, but it's really an adapter. The headphones themselves use a standard 1/8-inch 4-ring plug to couple the stereo headphones and the microphone to one plug. The adapter has one 3-ring headphone plug and one 3-ring mic plug. So, if your USB port is more than 3 feet away, you're out of luck to plug into the USB DAC.

Should you buy them?

Really, they're not bad headphones. It's not a terrible microphone. Sure the audio cables are a bit strange and the DAC can cause some conflicts on your system. Often with gaming headsets, you either have great headphones with a terrible mic or a great mic with terrible headphones. Neither is the case with the ATH-AG1. However, when compared to anything within $150 of the price point, the headphones on the ATH-AG1 are either merely equalled, or vastly outclassed. They look incredibly impressive. The initial impression when you see them is "whoa." And putting them on does honestly feel incredibly comfortable (other than the leather cups that make your ears sweat). The paddle design on the headband is extremely comfortable, but does mess up your hair if they move at all. The ATH-AG1 doesn't weigh down your head, the mic is out of the way, and the mute button is convenient. But $300? We were expecting a bit more for our dollar.

Ty Audronis is a professional in the television and film industry. He’s scored many productions and worked as a sound designer in award-winning productions.