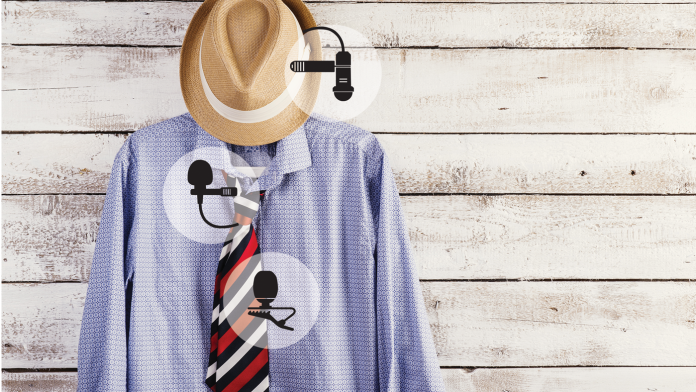 In a scripted sitcom, the audience never sees a mic. Why? The production must sustain the illusion that the audience is watching the characters live out their lives. A visible mic would destroy that illusion in the same way that an accidental wide shot would show that the characters are actually on a set and not in their kitchen. The challenge lies in hiding the mic from the camera’s prying eyes.

In this article, we’ll explore how to capture audio with a mic cleverly placed on the human body, just outside the camera’s view. You’ll learn how to use a special mic that is great for hiding because it is super small.

A tiny lavalier mic is unobtrusive and typically attaches to the clothing of the talent. Sometimes spelled lavaliere, it is a French word for an ornamental pendant worn on a chain around the neck. Years ago, bulky lavalier mics hung around the neck on a necklace. Nowadays, these mics are extremely small and often called a lav or lapel mic.

Essentially all modern lavalier mics use a condenser transducer to convert acoustic energy into electrical energy. This is the type of mic that permits your cellphone’s speakerphone to work its magic. Most lavaliers have an omnidirectional polar pattern that picks up sound coming from virtually all directions.

These minuscule mics work best when attached to clothing at a person’s sternum. This placement allows the mic to pick up some of the resonant sounds from the chest. If placed elsewhere on the body, some EQ adjustments may be required in post-production to fill out the tonal quality of the audio.

Concealing in a shirt or blouse

The most common garment worn on the upper body is undoubtedly a shirt or blouse. This wardrobe choice offers several opportunities for hiding mics. Let’s look at some of them:

1. On a dark-colored, buttoned, dress shirt you might be able to pop the tip of a black lavalier mic out of a buttonhole. On the inside of the shirt, use gaffer’s tape to secure the mic and cable. With appropriate lighting and favorable camera angles, the audience will likely never notice the mic.

2. On that same dress shirt, you might be able to hide the mic in the cloth flap between two buttons. Put a loop of self-adhesive moleskin around the body of the mic to minimize contact noise with the shirt’s material. Most pharmacy stores sell moleskin.

3. A necktie offers additional hiding places. Most lavalier mics include a clip for attaching to a tie. Hide the mic by simply clipping it to the back of the tie. Use moleskin to protect the mic from contact noise. The audience will see the backside of the mic clip and assume it is a standard tie clip.

4. Another necktie hiding place is at the knot. Loosen the knot and feed the mic through so that it barely hangs out the bottom. Using an omnidirectional mic is critical here, because it will be pointed away from the talent’s mouth.

5. What about a traditional 2 or 3 button polo shirt? In this scenario, you can place the lavalier in the collar below the buttons. Use gaffer’s tape to secure the mic and cable inside the shirt.

6. Another option is to hide the lavalier under the collar of a shirt. Use gaffer’s tape to run the wire around the back. Try to determine if the talent will be turning their head to one side or the other, then place the mic on the side the talent will turn towards most often.

7. A t-shirt affords a challenge, but one that can be overcome. In this situation, attaching the mic directly to the chest of the talent is a good option. Use first aid tape to attach the mic to the sternum. Just like in the dress shirt example, use moleskin to create a small buffer between the mic and the shirt.

Other places to hide a lavalier include under the brim of a baseball cap, or along the brim of a fedora-style hat. You can even hollow out a plastic writing pen, feed a tiny mic through to the top, and run the cable through a small hole on the inside of a dress shirt pocket.

The best advice is to hide a lavalier only if there are no other possibilities — like the use of a shotgun mic. Also, be aware of personal privacy issues when placing microphones on talent. Finally, be sure to use headphones to monitor the audio and listen specifically for noise generated by clothing coming into contact with the mic.