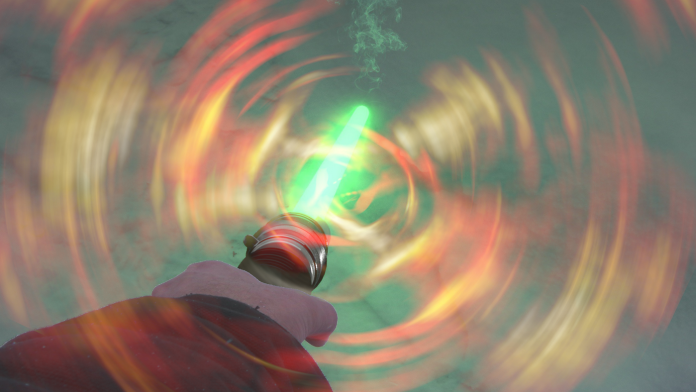 There will always be a sound effect during the production cycle that will make you take pause, as you come to terms with how it should sound. Maybe you are fortunate enough to have something in mind that you can elaborate on, otherwise it’s time to sit down and brainstorm for some ideas.

As your experience in the field expands, so too does your understanding of your work style and method. I tend to factor time into my workflows, which accounts and allows for happy accidents and some amount of delays. Try as I may, my work is dependent on iteration and is constantly being honed. And you always have to accept that you will have the occasional bad day.

Finding and creating a unique sound effect is an exercise in distilling ideas and blending sounds until you end up with something that feels right.

Finding and creating a unique sound effect is an exercise in distilling ideas and blending sounds until you end up with something that feels right. Once you reach this point, you are actually ready to begin. You now have a working prototype that might actually become the finished product.

It’s not uncommon to have several developed ideas that never see the light of day, but in the process, they lay the foundation for the concept that eventually wins out.

Time For a Story or Two

This next part is based on stories about the sound design challenges faced during the original and the more recent “Star Wars” movies. These are parts from behind-the-scenes documentaries that I have found particularly inspiring and enlightening throughout my childhood, college and work life.

“Star Wars” sound designer Ben Burtt has been a big inspiration and influence to a lot of sound engineers, myself included.

What better place to start than one of the most memorable and iconic film sounds of the last 40 years. Lightsabers have solidified themselves in our culture in a way that provides instant brand recognition, even to those that have never seen any of the movies.

Ralph McQuarrie is often heralded as the genius behind the look and feel of the “Star Wars” universe. His concept art paved the way for the environments and set design.

Looking through the concept art and seeing the lightsabers had already planted a seed inside the mind of Ben Burtt. What followed is a great example of discovery by accident, or what we like to call found sounds.

While working at an auditorium Ben had developed an appreciation for a film projector motor’s steady rhythmic hum. Meanwhile walking, with a live microphone, by a television with an exposed cathode ray tube provided the buzz. Together they formed the base lightsaber sound. Motion sounds were created during foley with Ben moving a Shotgun microphone in front of a speaker in order to create a Doppler effect.

This next scene from “Attack of the Clones” shows how important and common iteration is to a project. The build-up to the scene saw the team compiling a huge list of machine and mechanical noises, with some even originating from as far back as “The Empire Strikes Back.” The next step was to start blending the sounds into the scene.

Early versions of the foundry scene included a percussive musical soundtrack that featured quite prominently alongside the sound effects. This was out of a desire to blend organic and inorganic elements and in Ben’s words, to make it sound alien and “not like the Ford Motor Company”. It’s quite obvious that this first version did not have the desired effect.

The later versions that made the final cut are much more focused on mechanical sounds, with the musical soundtrack switching back and forth between action set pieces and the character’s themes; like when Padmé is dodging and ducking under metal presses while accompanied by a variation of her theme.

It’s good to know that even pro’s sometimes need a couple of tries to get it right.

And now for the loveable and breakdown prone Millennium Falcon. The hyperdrive’s mechanical woes are a recurring comical theme throughout “The Empire Strikes Back.” Ben Burtt’s solution, as usual, lacks none of its charm. The core foundation of the sound comes from a 1928 bi-plane starter motor. The rest is a combination of a dentist’s air jet providing a hiss, an arc light motor contributes a metallic clunking, a tank’s turret motor providing a mechanical clicking sound, and it just wouldn’t be Ben Burtt if he didn’t record the studio’s noisy and groaning plumbing and find a way of working that in.

The end result is comic and convincing, but not not in a lo-fi way. It gives us the impression that hyperdrive works off of more than just made-up parts and words; the sound effect gives it a mechanical and tangible quality.

Making something new is always difficult, for me the hardest part is the beginning, when you are starting with nothing but a blank arrange window on your DAW. You have a video reel and a set of dialogue, but nothing that really matches what you see and hear in your head.

The stories above taught me the importance of layering and manipulating sounds. Nothing is ever a pure extrapolation of its source material; you need to hone and alter your sounds to make them work. Raw sounds need to be carved and whittled into their final forms.

Sound libraries are a good and necessary starting point since they often provide a lot of the base sounds for any production. This leaves only the bespoke specialty sounds. These will require a blend of archive sounds, recorded sounds and foley. The foley elements can be used to contribute to your sound effect’s palette as well as triggering the complete sound effect to use for timed sequences where you need a more human performance.[image:magazine_article:66648]

Creating sound effects requires imagination, as well as skilled use of the editing environment. Feel free to experiment with time warping, reversing sounds, and chopping bits up. Don’t underestimate the importance of a sound, no matter how small, because it can still play an important role.

Automation and good use of multitrack mixing will help you achieve a lively blend that changes with your video. Your blend should not remain static, try to prioritize and give your sounds an order by figuring out how they contribute to a scene. If you are adding sound to a machine, try to think of each sound as a functioning mechanical part.

Play and manipulate the sound stage; if the onscreen elements are moving consider moving your sounds too. Panning can move them from from side to side, or all around if you are mixing in surround. Delay and fader levels can be used to move the sound between the foreground and background.

I have always said that if the end result feels right, adds to the scene and survives a night’s sleep, then the odds are in your favor that you made the right decision.

You will think back to the challenges and difficulties from earlier times either on this project or another, to a time when things didn’t quite go your way. Keep those moments in perspective because they make the present that much sweeter, but also never forget to be mindful of your mistakes.

The satisfaction takes time to sink in and for me is initially a more vicarious experience through the crew. Those early feelings are more of relief and completion that the job is done and it has lived up to the team’s expectations.