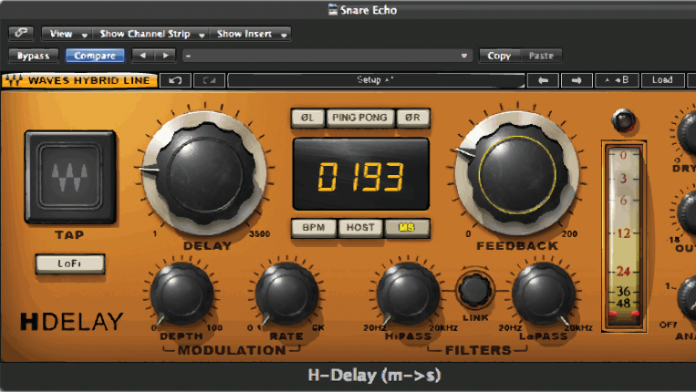 What is delay?Â In its most literal definition delay is just what it implies, slowing down a signal so it arrives later than the original. Early analogue delays used tape to store the signal, with later units using analogue circuits, and finally digital units where the signal is stored in RAM.

In the digital realm, delay becomes an umbrella term for a group of effects that rely on sample delay to produce their sounds. Since digital audio works with multiple bit depths and sample rates, samples become an inconsistent way of measuring delay. Instead the common measurement for time-based effects is in milliseconds (ms).

This section demonstrates several do-it-yourself examples of how to create several rudimentary delay based effects by adjusting the period of time that the source signal is delayed by. All of these examples have the source sound placed on its own track and is sending a signal to a dedicated bus with the delay effect. This allows you to balance the wet and dry levels. Each example has an accompanying sound sample and screenshots documenting the plug-in settings and signal flow.

The chorusing effect is achieved when two identical and slightly out of tune signals are combined. The delay time will be below the 15ms range. The example uses the modulation settings on H Delay to detune the pitch of one of the signals.

This effect can be achieved with delay times of 15 to 35ms. Itâs commonly used on guitars, vocals, horns and strings to thicken up the sound and give the impression of more instruments being present.

Flanging can be reproduced when the delay times are constantly varied. This has the effect of combing through the frequencies and creating an uneven alignment of a sound waveâs peaks and dips and affecting their equalized frequency response. Thus, not only does the delay timing change, but it will provide a degree of equalization.

Echoes are created when the delay times exceed 35 to 40ms and the some of the signal is sent through again; this is referred to as feedback.

Exceeding delay times of 35ms will result in the sounds being interpreted as discrete echoes. Delay in itself is great at creating a sense of space and adding size and character to a performance. As with all effects, you should apply good taste so that your mixes do not become muddy and devoid of definition.

Deciding when and where to apply these effects is a matter of taste and you should provide a meaningful contribution by having a sense of purpose. The mixing process is about honing and distilling your project into its final intended form. Simply comparing the original material to a later mix on the basis of whether one sounds different from the other only leads to trouble, especially if the project has become a pastiche of delay based effects that give the impression that reality has closed shop for the day. This section will cover the common uses of these effects in music and video production.

Needless to say, these effects are best placed on a separate bus in order to blend the wet and dry signals. Each effect can be taken to greater extremes to create some truly abstract sounds. This does have its place since a lot of great movie and game sound effects are made this way.

This is an established method of adding depth and a sense of movement through by blending a slightly detuned and delayed signal with the source material. Chorus can be applied to a variety of sound sources that include guitars, bass and vocals. The same can be applied to spice up sound effects by making the sound evolve as it travels over a distance.

This will no doubt be your go-to effect if you want to create a sense of space or repetition. You will tend to hear delays applied to vocal and percussion tracks in order to extend phrases and create a rudimentary rhythmic repetition. Reggae dub mixes are shining examples. The same technique can be used in audio for video by creating echoes during cavernous or spacious scenes. Just think back to a scene where a character comes across a giant pit only to whistle or drop an object and the ensuing echo of the object striking a very distant bottom.

At this stage you will be delaying a signal by a period of time longer than 35ms so that you can start hearing discrete delays that do not become a form of doubling, chorusing or flanging. When bussed out, you can create a nice blend of wet and dry signal, and these are great way of giving vocals and guitars a greater sense of space. I am a fan of bussing out signals to stereo delays and creating a wider stereo image that adds extra flavor and character to the original signal. This method can be used in conjunction with reverb or without it, remember to use your ears and good taste.

The most widely used and recognizable form of delay used in video production is during live broadcasts, offering the engineers the time to work around or censor unscripted events like a guests or cast members cursing. Video delay is used to a similar effect. Audio delay can be also be used as a means of synchronizing errant audio tracks that are ahead of the video. Normally the best practices to avoiding synchronization issues are to double-check frame and sample rates well in advance.

Normally the best practices to avoiding synchronization issues are to double-check frame and sample rates well in advance.

The evolution of delay from analogue to digital has truly allowed it come into its own by embracing most of its early qualities while simultaneously moving beyond the limitations of tape based, analogue circuits and early digital technology. Early delays have gone from using large echo chambers, to tape systems with multiple playback heads, analogue circuits that suffered from limited memory and signal degradation and early digital delays which in some ways experienced similar problems due to the high cost of memory and lower sample rates. The digital revolution of the 80âs and 90âs quickly made those issues a thing of the past and has paved the way for todayâs digital delays to do whatever we ask of them.

Every major Digital Audio Workstation (DAW) such Pro Tools, Logic, Cubase, Sonar, Ableton Live and many more will provide a robust set of plug-ins that include a variety of delay options. Additionally, there are many excellent companies that provide premium plug-ins. Waves and Universal Audio (UAD) are some of the biggest players in the space. H Delay by Waves is a personal favorite, while UAD has the CooperÂ® Time Cube Mk II Delay Plug-In.

Dedicated outboard gear is always an option, and Lexicon has a long history of delay units as well as a line of plugins. Outboard gear has the added benefit of providing tactile feedback as you manipulate the various controls and lend themselves more easily to experimentation.

Ultimately, you should base your purchasing decisions around what you need and decide when to save up for plugins or gear. The tools provided in todayâs DAWs are extremely flexible and get the job done. Additional tools become crucial for when you start hunting for a specific sound and tone within a plugin that adds the right flavor to your projects.

SIDEBAR:Â A brief overview of analogue delay technology in the lead up to todayâs digital world.

These rooms can range from specially designed spaces that feature reflective surfaces and dedicated speaker and microphone setups, to impromptu setups in bathrooms, hallways and stairwells. Echo chambers were originally used before the invention of echo effect units. While the number of echo chambers has declined the approach still remains popular with some engineers and is a novel way of achieving an authentic echo.

In the attempt of providing more controlled delay manufacturers started turning to tape as a means of storing and delaying an audio signal. The most iconic of these was the Roland RE-201 Space Echo, which incorporated a tape playback system, three playback heads, a spring reverb, and multiple inputs into its design. The results earned it a place in thousands of records and enabled musicians to create complex multi tap patterns when all three playback heads were used. This resulted in a 17-year production run and numerous upgrades to the model line.

Referred to early on as âbucket brigadeâ circuits because of how the analogue modules would pass the signal from one to the other in order to create delay, these units were hampered by low circuit memory, the cost of building enough circuits to provide a useful delay period, and finally the signal degradation experienced when passing the signal through so many circuits particularly when using delay feedback.

Blag Ivanov has a B.A. in Recording Arts from California State University Chico. He is a sound engineer and web developer with a love for music and classic cars.