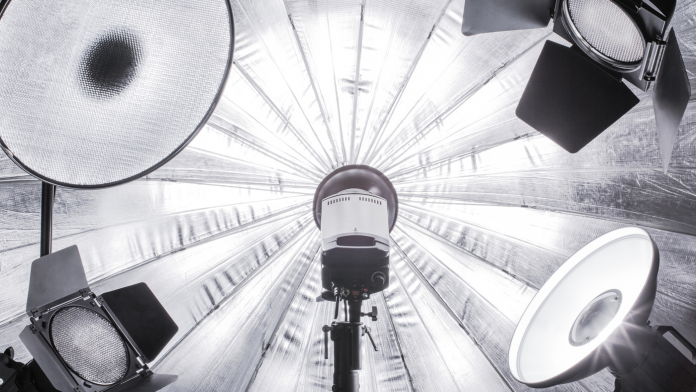 âPeople tend to obsess over cameras and lenses, but what they think is a good a camera or a good lens actually is just good lighting.â Says Director of Photography William Hellmuth. He is based in Orange County and has been behind the camera for more than 10 years. He got his start working on productions for the National Park Service, but has branched out to commercials, music videos and short films. William has learned that, âWhat you have in your camera bag is not going to affect the quality of your video as much as what you put in front of your camera.âÂ  By that, he means a well lit scene.

We caught up with this busy DP to find out just exactly what he keeps in his lighting kit that helps him get the best shots. While everyone approaches the craft in different ways, and every project is different, William would have us understand that âI tend to stay pretty traditional. I find the tried and trusted methods serve me pretty well if I just stick to them.â

The first instrument that Hellmuth is going to grab for definitely falls into the tried and trusted category. âWhat Iâve come to find out that I want to have on every, single shoot is a good spotlight. I use tungsten quite a bit actually because it’s affordable.â He says that HMIâs are great but he prefers a simple 1K or 2K tungsten fresnel. âIf I need it to be a harsh backlight, or if I want to blast it through some diffusion or off a wall for a nice, big, soft source for a good key, I can do that. Itâs extremely versatile.â

“What Iâve come to find out that I want to have on every, single shoot is a good spotlight.”

Of course, those sources need lots of control. William tells us that he always has a stash of c-stands, flags and reflectors, plus he always packs several 6 by 6 sheets of diffusion material. His favorites are 1/4 and Full Grid. Thatâs the designation for the weight of the diffusion material. âThe difference for me between an OK shot and a shot that is very dialed in is in how much I’m able to control the light on the background.â

Just because heâs used to the older methods, this DP does not shun new technology. In fact he is excited by the new advances in LED lighting. âI kind of feel like lighting is doing what cameras were doing five years ago. LED technology is huge.â He also packs a couple of Intellytech F-165 Light Cannons (www.intellytechusa.com). These look like a small fresnel but are cool, low watt LED that can be controlled by WiFi. They can easily be dialed in to match the Tungstenâs color temperature. These have become his new workhorse.

In the âdonât leave home without itâ category, William puts a light meter at the top of the list. âIt helps me move way faster, because Iâm not waiting for video to be set up and cameras to be framed up. I can just run around with my meter and know exactly what I’m getting.â It may seem redundant to some, since cameras now have built-in meters and live preview, but a light meter is still an essential tool for quality lighting.

Recently William has found a small, battery owered LED, the Quasar Q, (www.quasarscience.com) to be a life saver. âThey are extremely useful. I can just kind of pop up whenever I need. I use those on just about every shoot for a little eyelights and things like that.â He says the Quasars are great when there’s a camera shift and you just need a quick punch of light somewhere, even on the background.

Heâs also a big fan of reflectors. âI shot an entire music video that came out really nice, just using the sun as a back light and bouncing the sun back onto the singerâs face. It is amazing how much better a simple bounce can make everything look.â

William says that mastering lighting is a matter of angles and knowledge– and the best way to learn that is to start as inexpensively as possible. He says that you can find lights, especially tungsten fixtures, from all sorts of places like churches, schools or theater groups.

He says, start out with the basics, âI would recommending just getting your hands on any tungsten spotlight.Â  Like a 650 or a 350 (Watt). Learn how to control the light and how to bounce it.â He says to light simple subjects, in a variety of different settings and record your work. Thatâs the best way to see the results. He also recommends volunteering with working professionals and, as time permits, ask questions. You donât need a lot of fancy equipment in your light kit; you just need to learn how to best use what you have.

You can see some of Williamâs work and catch up with his latest projects, on his web site at www.williamhellmuth.com