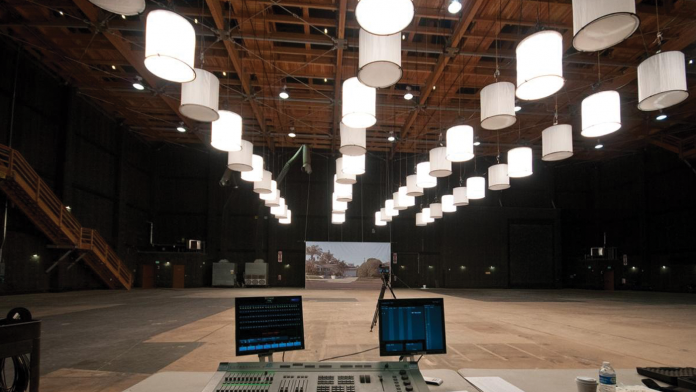 For those of us who contribute daily to the motion content business, eventually you will be asked to light a large subject or group of subjects within a single frame.  This will involve a different set of criteria than just lighting just one actor, or object.  You must think broadly — it’s about volume.

Broad and Soft Coverage with Room to Work

Typically, when the occasion calls for a large subject — like a car on stage, for instance, a top light works great for two reasons. Firstly, toplight best simulates the natural ambiance found outside. We call this 'lighting justification.' Second, it allows for better highlight formation in glass and sheet metal. It also gives the camera plenty of room to shoot all around the car without encountering stands and hardware. Next time you see a car commercial, look for the long 'liquid highlight' gleaming on the roof and hood. Then, compare that to a shot of a car driving along the highway. The latter is likely done at the magic hour — 1/2 hour before to 1/2 hour after sunset — simply because the blue, cloudless sky without the spectral source of the sun, combined with even tones and color saturation, makes a lovely liquid reflection on the car's skin!

When lighting large groups of people, the strategy can be the same as with a big subject. For the purposes of this discussion, let's define a group of people or objects as three or more. First, let’s consider the script. Does the tone of the scene allow you to use and justify a large source? If so, pick a side to key from and build what we call 'the big softie.' This is a large light source, big enough to accommodate the group, as well as the surrounding set. I like to go with a large Chimera light fixture and an egg crate softbox, or a Kino Flo blanket light for this — something large with lots of diffusion.

When done from the floor, this style of keylight will be highly directional, either as a side light or a front light. As a side light, it will affect the folks on the hot side differently than folks on the furthest side from the source — unless you can position the source some distance away from the group.  This may, or may not be feasible, due to location constraints.  More importantly, it creates an unbalanced contrast that we say looks 'sourcey' if it is not broad and soft enough, particularly from the front.

When a floor key will not work, you really have two choices. You can shoot using a large number of practicals — table lamps, wall sconces, etc. — and allow your groups of people to mingle in and out of individual pools of light like at a cocktail party.  Or, you can go with a large, soft top light source that accommodates everyone while leaving ample room to move about the set without interference. In either case, the approach I have taken in recent years is to light the set first, without thinking about the people in it. Only then do I consider whether the talent requires any additional illumination, outside of what the environment provides.

I have come to this conclusion after years of constructing multiple points of key in the same shot or using the double back-cross lighting method, a more complex setup that begins to get tedious and look over-used. A good measure of base light, say 2 to 3-stops below key, is a fine place to start. This can be achieved with a soft fill source or two, evenly placed around the camera. Large LED panels work great for this. Then I’ll add a sprinkling of practicals around set. Keeping these a stop or two above key adds just the right amount of contrast to the scene. I like to load table lamps with 40-watt household bulbs to start. These offer a warm glow that generally agrees with the latitude of the camera at ISO 400. Then, I use a small hand dimmer to 'tweak' the right levels by eye or with a waveform monitor. The only remaining thing you may need is a key that works in the hero position.

Regardless, let the shadows play alongside the set lighting to promote a sense of ambiance that the people can move through. This is the most natural approach, and may require only a small key light at your number one camera position and something at the end of your move — to finish a walk-and-talk, for instance. Everything in between points one and two reflect the environment you have carefully constructed.

The advantage of a broad, soft toplight is that it offers shape, and at the same time fill and edge qualities to groups of people positioned below.

Conversely, consider adding a soft toplight. The advantage of a broad, soft toplight is that it offers shape, and at the same time fill and edge qualities to groups of people positioned below. For those facing into the central cone, the toplight acts as a high key, from the beauty position. The 'wrappy' quality it possesses is due to its wide field.  People facing away from the central cone will experience an edge effect, or a fill effect depending on their posture. This is quite an effective, and often flattering, solution.

The tool best suited for this style of lighting is a blanket-style light. Kino Flo makes one in 8-foot by 8-foot form-factor. A few years ago, I went to Modern Studio Equipment with some drawings. My idea was to create a modular “soft box,” for lighting a car onstage.  It needed to be easy to assemble in the field, lightweight and durable. I designed a 4-foot by 8-foot frame, that was 1-foot thick, and would support a harness that held fifteen 4-foot Kino Flo fluorescent tubes. The box needed custom ‘soft’ sides, and a custom front diffuser, that could be easily added, or removed. The soft sides needed to be black on the outside, with a white reflective surface on the inside. They would also attach with Velcro. The whole unit could then be mounted to a ceiling with hardware.  It was a tall order, but Modern’s team came through! The light was a success, and I went on to use it on many film shoots.

In recent years, the helium balloon has emerged as a great, non-invasive lighting solution for shooting in locations where a broad toplight is needed, but equipment restrictions prevent hard rigging — like the sets from "Downton Abbey'" or a museum like the Louvre, in "The DaVinci Code." In these circumstances, the self-suspended helium balloon is an excellent soft, 'wrappy,' top-source that comes in daylight, tungsten, or hybrid colors.

Despite the common misconception that toplight is avoided in Hollywood, DP's maintain its use as a versatile solution that is highly effective at volume style illumination. When carefully planned, toplight can be natural looking and functional in situations involving large sets, groups of characters, or complex locations using big camera moves, cranes, jibs or other means to follow big action. It's just another brush!

A retired Gaffer, Michael has enjoyed 26 years working on movie sets all over the United States. As a member of the International Alliance of Theatrical and Studio Employees, he has been fortunate to collaborate with some of Hollywood's most talented people and is a veteran of 74 feature films and over 400 episodes of TV.