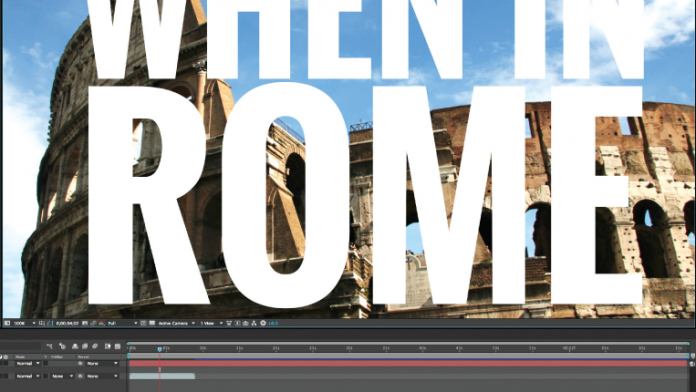 Compositing is a normal part of the video post-production workflow, whether it’s crafting a title, placing a lower third or stunning the audience with a visual effect. One of the simplest, but most overlooked, ways to composite video is through the use of track mattes.

A track matte is simply an image, or a video clip, that is used to create variable transparency in another video clip.

A track matte is simply an image, or a video clip, that is used to create variable transparency in another video clip. It can be a still image, a video clip, a graphic, text or a generated shape. There are two basic kinds of track mattes, alpha mattes and luma mattes. Alpha mattes lend their own transparency, their alpha channel, to another clip for the composite, while luma mattes supply a luma channel, their brightness, to define the transparency in the composite.

Luma mattes work in the same way as alpha mattes, except instead of using the track matte layer’s alpha channel to determine the transparency in the composite, it uses the the luminance values of the luma matte is used to determine variable transparency. In this way, variable transparency can be created without using a source clip that contains any variable transparency. For example, you might have the same scenic clip you used for the alpha matte composite, but instead of a text clip, you have a black and white clip of flowing ink, spreading throughout the video clip. Your could take the ink clip and set it as a luma matte, applying it to the scenic clip. As a result the scenic clip would flow to life, becoming opaque, appearing only where the ink in the luma matte flows.

Track Mattes in Adobe After Effects

In some ways track mattes may sound complicated, but when put into practice, they’re rather simple. So simple in fact, that Adobe After Effects has track matte functionality built into the timeline window of its interface. Each layer in the After Effects’ timeline has a series of switches and modes. Under the modes of each layer, with the exception of the top layer and audio files, is a Track Matte pull down option. By default this option is set to “No Track Matte.” There are four other options under this menu; Alpha Matte, Alpha Inverted Matte, Luma Matte and Luma Inverted Matte. When a Track Matte mode is selected for a layer, that layer becomes the base layer and the layer above becomes the track matte, the layer that defines transparency in the base layer. When a track matte mode is selected, visibility is turned off for the layer above, the track matte. This is because the track matte is there to create transparency but not to be seen as a clip in the end composite.

A solitary track matte is easy to execute and is a great technique for filling text with video or punching a hole in a clip to reveal a second image underneath. The current trend of double exposure portraits can be easily pulled off in video by shooting overexposed footage of a subject on a white background and using the luminance of that image as a luma matte in another piece of video. But track mattes don’t have to be limited by a single composition. Multiple track mattes composited together can make for some dynamic imagery. For instance, you could create a double exposed portrait using the aforementioned technique but then take it a step further. The double exposed portrait can be pre-composed and then drift into the screen by using blowing smoke as a luma matte to transition it onto screen. That composite can then use a layer of text as an alpha matte. The chain of pre-composing clips and track mattes can continue as far as you want to travel.

Not Just a Mode

The principles of track mattes go beyond the mode options inside of the timeline window. There are many native effects and third-party effects which define their basic parameters using the same technique track mattes do to define transparency. If you understands track mattes, you  will be able to use effects that use “Map Layers.” For example, the “Displacement Map” effect in After Effects references another layer in the composition and uses one or more of the chroma, luminance and/or alpha channels in that image to determine the amount of distortion in an image, thus creating variable distortion.

Track mattes are one of the most useful resources in a video editor’s glovebox. They’re a great tool to navigate a myriad highway of composites and for creating variable transparency. Once the editor knows how they work, they’ll be able to read an image and know where it can take them.

Adobe Premiere Pro’s video editing environment is different than After Effects’ for obvious reasons; it’s a video editing platform as opposed to a compositing one. For this reason, you don't have the option to set a track matte directly in the timeline. Still, Premiere Pro packs plenty of power to punch up promising composites.