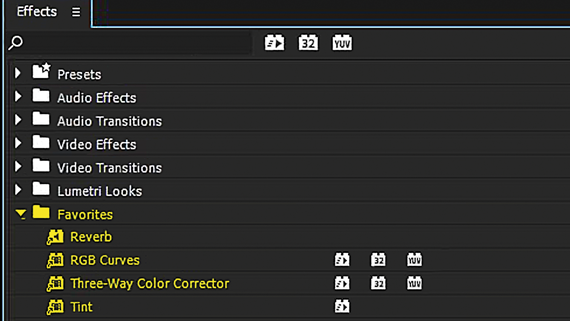 It’s a daunting task for the beginning editor to determine which of the numerous tools at their disposal are best used to create the look they want. In a short amount of time, an editor can find themselves round-tripping their edit through multiple applications, trying to get a specific look. The more an editor messes around with multiple programs, the more errors can occur, and more than anything, precious time will be lost. An editor can easily stay within the solitary editing environment of their video editing program and use its native filters and effects to dial in on the style they’re looking for. All it takes is some basic knowledge about which filters are at their disposal and what those filters do.

Here is a look at 15 filters that every video editor should be familiar with in order to take full advantage of their video editing program.

The three-way color corrector is a heavy hitter amongst video editing filters. It allows the video editor to define three separate dynamic ranges within a video clip; shadows, midtones and highlights. The video editor can then individually alter the color properties of each of these ranges. The three-way color corrector can be used to fix and balance poorly lit footage or used to stylize and color a video.

Much like the three-way color corrector, the RGB Curves filter is a powerful color correction tool. It gives the editor four curve graphs to alter: a luma curve and a curve for each individual RBG channel. By shaping a curve, the video editor changes what the resultant output is from that channel’s input. With RGB Curves, a video editor can drastically change the contrast of an image or gently influence its tonal direction.

The tint filter is simple, but its simplicity does not detract from its versatility. The tint filter allows the user to tint their footage to a particular color. Most tint filters allow the video editor to select how much they want the filter to influence the clip, from completely tinting it to slightly skewing the clip towards the user selected colors.

Possibly one of the most desired, yet misunderstood filters is the Chroma Key filter. It allows the editor to select a color range from the image and mask it from the clip, making that range transparent. A skilled editor can also use the chroma key filter, in combination with other filters, to perform secondary color corrections, altering a specific color in the clip either subtly or to another color all together.

There are many types of blurs that can be applied to video clips. Blurs are a great way to hide footage that should be implied but not seen in detail, or used to create a soft background to anchor text or graphics.

Gaussian blurs apply a mathematical formula that creates a soft, even blur of the image.

Directional blurs blur the image in one lateral direction, most often at an angle that is user selected.

An editor can easily stay within their video editing program and use its native filters and effects to dial in on the style theyre looking for.

Radial blurs work like directional blurs, but instead of the blur being in a single direction, it is circular around a point selected by the user.

There are a wide array of distortion effects. Distortion filters and effects manipulate an image, moving pixels and altering the way they appear.

The transform filter works like the transform properties of a clip. The video editor can use it to zoom, rotate or move the clip’s position on screen.

A shift in camera technology requires a shift in post-production tools. Not all parts of the screen image in a single frame are recorded at the same time when captured with a CMOS sensor. This causes the rolling shutter effect, a jello-like wobble of the screen image. This is easily fixed with the Rolling Shutter Repair filter, making beautiful DSLR footage useful in the edit bay.

A filter that fits hand-in-hand with the Rolling Shutter Repair filter is the Warp Stabilizer Effect. The use of small cameras is evident by the increased amount of handheld footage. There is an aesthetic authenticity to be found in handheld footage, but it doesn’t always work out as planned. A shaky camera can disorient the audience. The Warp Stabilizer Effect helps to smooth out the shaky footage, creating a fluid movement that’s easier for the audience to follow.

Sometimes the camera sees more than it needs to see. The crop filter is another simple filter that takes care of a lot of work. It allows the video editor to crop in from any or all of the four sides of the video image.

Filters aren’t just applied to the video track however; they can be applied to the audio track to change what the audience hears. This is good news because, for many novice editors, the process of learning a video editing program is daunting enough without having to add in the learning curve of an audio editing application. Audio filters inside of a video editing program prove to be powerful tools.

The EQ filter allows the video editor to adjust which audio frequencies are more or less dominant in a clip. It can be used to boost vocal performances and subdue background hums.

A reverb filter creates reverberation on an audio clip. It modulates the audio to produce an echo, extending the decay of the clip. It can be used to simulate auditory space, like an empty room, or used subtly to help punch up a voice-over track.

Putting It All Together

The great thing about filters and effects is that there’s not a single solution that does everything. Instead, there are a wide variety of tools at the video editor’s immediate disposal that can alter their video, conforming it to their vision. Filters and effects become much more powerful when they are used together in combination, creating dynamic looks for beautiful end results.

How to Extend a Video Editing Program’s Filters and Effects

There are many software developers who sell third-party plugins that work with most standard video editing applications. Companies like Red Giant and GenArts make plug-ins that extend the number of filters and effects available for popular programs like Adobe Premiere Pro CC, Sony Vegas and Avid Media Composer.

Video editing applications are often bundled with a visual effects or motion graphics program that the user can use to create their own filters and effects. Final Cut Pro X users can use Apple’s Motion to create their own filters and effects that they import into FCP X. The user can then apply the effect, directly in FCP X, never again having to leave its environment. It provides a native customized solution that contributes to the efficiency of the video editor’s workflow.

Filters and effects inside of video editing programs offer video editors a wide variety of options to alter and customize the desired effect. It can take a fair amount of time to customize and adjust filters. If there is a particular look the video editor desires and finds themselves using on a regular basis, they can save that filter, with its adjustments, as a preset. Not only can a preset be created with a single filter, it can be created from a stack of filters. This makes for a one-click operation that the video editor can apply at anytime.