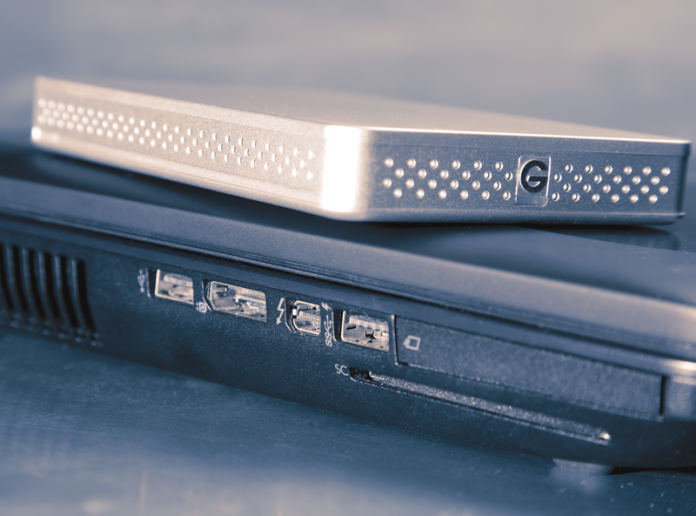 By answering a few questions about the projects you'll want to complete, you'll have a good idea of what additional storage gear you'll need, if any.

What resolution is your source footage: SD, HD, 4K? Is the footage highly compressed, mildly compressed or uncompressed? Does the footage need to be converted before editing? How much footage are you editing? These are the questions you should be asking before you begin any project.

Many laptops can edit compressed SD and HD footage without too many problems. Ultra High Definition is a bit more challenging, but as more editing programs are providing native support for UHD, it’s getting easier. You should check the system requirements for the software you'll want to edit with to ensure your laptop can support the resolution you'll want to work in.

By answering a few questions about the projects you’ll want to complete, you’ll have a good idea of what additional storage gear you’ll need, if any.

The video file of an hour of footage from a GoPro will be smaller in file size than the file of a camera shooting CinemaDNG lossless even if both clips are in 1080p. Compression plays a big part in video file sizes. Many cameras are able to shoot at multiple bitrates which increases the complexity of figuring out your storage needs. Looking at user manuals or the manufacturer's website for the cameras or recorders you're using is a good way to find the bitrate(s) supported. This allows you to calculate the amount of storage you’ll need for every minute or hour of video. Manufacturers often list only the video bitrate so don’t forget to factor in audio bitrates as well.

If you have access to the gear you’re going to be recording with, an easier way for you to determine file size might be to take some test shots at one minute long. Then you’ll be able to calculate how much space the video, audio and metadata take up. Most cameras and recorders use variable compression rates so a one-minute video clip won’t always take up the same amount of space. Be sure to overestimate your storage needs to factor this in.

If the source footage you're going to edit isn’t supported by the software you're editing with, you're going to have to transcode that footage to a codec that is supported. This will take more time and more storage. Most video editing software supports a large number of codecs although support for file types like REDCODE and CinemaDNG isn’t universal. REDCINE-X Pro, which is free, can be used to transcode footage from RED cameras; there are also many free programs to transcode footage recorded in CinemaDNG.

What other media files are you editing?

Inevitably, you'll also have other media involved in your project such as stills, animation clips and additional audio. A few JPGs or a handful of WAV audio clips don’t take up that much space; however, if your editing projects routinely include animation clips that are saved as TIFF sequences, storage can become an issue. Likewise, DSLR time-lapse clips shot in raw or documentary type projects that use a lot of archived footage can also eat up space so you’ll want to factor in storage of these media assets into your overall needs.

How complex are your edits?

The length and complexity of your edits will play a large role in determining if you need media storage separate from your boot drive. Consider a simple project in SD or HD with 20 or 30 minutes of source footage, a few graphics, basic color correction and simple transitions; this probably won’t need extra storage if your laptop meets the system requirements of the editing software you choose. Complex edits like multi-camera shoots, chromakeys, visual effects shots and work with UHD footage demand dedicated media storage.

What are your delivery specs?

What’s in your laptop?

If your laptop has a 256GB boot drive, and you’ve filled 100GB of it with your operating system and programs, you’ll want to leave about 28GB free for OS functions. That leaves you with less than 128GB for media storage depending on other files, software or updates you might want to add in the future. If you do have 128GB free for media storage, you’ll only want to use about half of that, 64GB, with source footage and leave half for renders.

While the lack of moving parts makes SSDs more reliable than hard drives, SSDs are not always faster. SSD speed ratings given by the manufacturer are not always accurate for video work. Some SSDs have slower write speeds than some 7200RPM hard disk drives. Blackmagic Design and Atomos both have lists of the SSDs and HDDs that are compatible with their products on their websites. These lists give you a good idea of drive performance while working with video.

Even if an SSD has slower read/write speeds than a comparable HDD, the SSD will almost always outperform the HDD when used as a boot drive. This is because HDDs have physical read/write pins that must move back and forth across the disk to transfer data which causes a delay when the pin is moving. SSDs have no moving parts so there is no delay.

Even if your boot drive has very fast read/write speeds, your system will still run slower if your source footage is on your boot drive. Your computer will have to stop transferring media data to transfer program or OS data. While this may only cause a slight delay, it is noticeable in large video renders.

What are your backup needs?

If you're editing short videos for the Web and you don’t have a lot of source footage or your footage is already uploaded to a cloud storage service so that you can collaborate with others, then you won’t need an external drive or RAID. Your backup is in the cloud. If cloud based backups aren’t an option for you, you're going to need external storage.

When is redundancy not redundant?

Redundant array of inexpensive disks (RAID) is a data storage system that was developed years ago to add data redundancy or performance (or both) to a system. Using RAID storage to increase performance can be very helpful, but using RAID 0 doesn’t bring any redundancy. In an external disk array using mirroring like RAID 1 or 10, the data is stored on two sets of hard drives though the device has only one RAID controller. If the controller fails, your data could be very hard to recover; likewise, if the controller corrupts the data, then all could be lost.

If you don’t have large amounts of media to backup, then a pair of USB 2.0 or USB 3.0 hard drives from a reputable storage manufacturer like Western Digital or Seagate will do. If your backup needs are greater, a pair of network attached storage (NAS) devices might be a better fit than a pile of external drives. Whether you’re using NAS or individual drives, you'll want to make sure that you're using them at least in pairs so that if anything goes wrong with one of them, you can easily access the data on the other. Some companies are going as far as using triple or quadruple redundancy to protect from data loss.

How do you get the speed you need?

A single, external HDD is going to give you a modest boost in editing performance if it is connected via eSATA or Thunderbolt. To get a large jump in speed, you’ll need a RAID like the ones built by LaCie, G-Technology and Western Digital. These arrays typically use HDDs because of the cost and much larger storage capabilities as compared to SSDs. You'll want to connect the RAID to your computer using the fastest interface possible like eSATA or USB 3.0, though Thunderbolt is even faster.

How do you keep it moving?

Your laptop editing speeds aren't just dependent on your media storage but also on how you manage your system. Adobe and many others still recommend that you use three different disks (or groups of disks) for your editing system: one with your OS and software, the second with your project files and the third with your media. It may not always be convenient to set up two external drives, but you will see better performance storing your project files and media files on a separate disk (or disk array) from your OS and programs.

When do I need digital asset management?

If you're working with other editors and artists in a company, you’ll want to use the same digital asset management system that company uses. Many editing software packages come with asset management tools; you can also use third party software for this. If your projects aren’t very large, simply organizing all of your files into folders by project and sub folders by media type might work for you.

With a little bit of work, you can easily determine the storage and backup solutions you need to fit the editing work you'll be doing with your laptop. Then you’ll be ready to go out and make your masterpiece.

What are common RAID levels and how do they work?

RAID can be used for redundancy, performance, or both. RAID 0 stripes the data across two or more disks so it can be accessed faster thus increasing performance; this is ideal for smaller arrays in which speed is the priority. In RAID 1, the data in the first group of drives is mirrored to the second group of drives, providing redundancy. In RAID 10 (1+0), the data is both striped and mirrored for performance and redundancy. RAID 10 is best for larger arrays that need both speed and reliability. All of these RAID levels work best with the same size and model of HDDs or SSDs. Just a bunch of disks (JBOD), also called spanning, takes a group of disks and turns them into a single volume (seen with a single drive letter by your OS.) JBOD is not redundant, does not require matching disks and is a good option when using NAS devices for backup.

Odin Lindblom is an award-winning editor whose work includes film, commercials and corporate video. Odin has been building his own editing systems for the past 10 years.