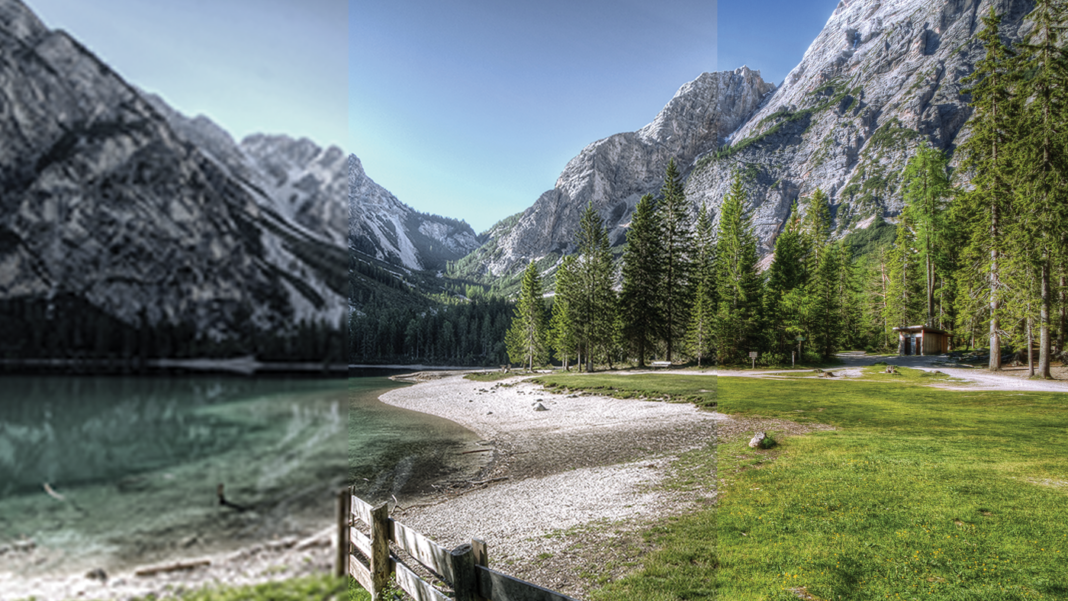 A video camera’s ability to reproduce a smooth gradation between colors and shades is an important factor when seeking to capture filmic images. The range of possible colors a video camera is able to capture is determined by the bit depth of the file format used for the recording.

What is bit depth?

All video cameras record their footage as digital files. These binary digital files are comprised of pieces of data known as bits, which can either be a 1 or a 0.
Video images are made up from points of color called pixels and the specific color of each pixel is defined by mixing together different amounts of the colors red, green and blue. Bit depth refers to the number of bits of data — 1s and 0s — used to record the color channels for each pixel.

Increasing the bit depth also increases the file size as more data is being recorded. However, while a 10-bit video file may be 20 percent larger than an equivalent 8-bit file, the former will give four times as many levels of color per channel.

DSLRs and high-end prosumer video cameras record 8-bit video internally. Canon and Nikon DSLRs use a variation of the MOV file format while Panasonic and Sony use the AVCHD format. While external recorders can be used with these cameras to record in a 10-bit format (such as ProRes), there will be limited benefits as most cameras can only output an 8-bit signal.

The Panasonic Lumix GH5 is unusual amongst mirrorless cameras as it can record 4K footage in a 10-bit format internally up to a frame rate of 30p and can feed a 10-bit signal to an external recorder at higher frame rates.

Canonâs C200, from the EOS Cinema range, records 4K in either 10-bit or 12-bit CinemaRAW format, depending on the selected frame rate, and can also record 4K UHD 8-bit footage in an MP4 file format.

Cinema cameras such as those from Blackmagic Design, RED and Arri can record 10-bit ProRes video files, but can also record RAW footage in a 12-bit file format. Some Sony professional cameras even have the option to record 16-bit video with an external recorder upgrade.

The majority of consumer monitors, televisions and projectors currently on the market are 8-bit devices, and while 10-bit video monitors are available, they command a premium price due to their higher specification.

10-bit computer monitors are more common, however, most computer graphics cards will only output a 10-bit signal when displaying video games. Video editing and grading software such as Adobe Premiere Pro, Final Cut or Davinci Resolve work internally at 10-bit or higher, but may need additional video output devices to feed a 10-bit preview signal of the video playback.

A limited range of 12-bit monitors exist, such as the reference monitors from Dolby, but these are intended for high-end professional editing and color grading suites.

Why does bit depth matter?

The human eye can only distinguish around 10 million colors, so in a world where most display devices are 8-bit and already producing 16.7 million colors, why do we need higher bit depth video files?

In many situations and for many applications 8-bit video formats will be fine. Working with 10-bit or 12-bit video requires increased data storage and a more powerful computer for editing your footage. However, the 8-bit limitations of only having 256 shades for each color channel can produce color banding in areas of gradation in tone, such as a blue sky in your image.

In general, the extra information in higher bit depth footage gives much more scope for color grading compared to 8-bit footage, where image quality can start to degrade quickly.

The additional range of shades (1024 vs 256) in a 10-bit image will also give more latitude for correcting blown-out highlights or deep shadows in an under- or over-exposed video. In general, the extra information in higher bit depth footage gives much more scope for color grading compared to 8-bit footage, where image quality can start to degrade quickly. Once youâve color graded 10-bit footage, you wonât want to go back to 8-bit files!

The increased tonal range also makes higher bit rate video files much better when shooting green screen footage or working with digital effects. Computer-generated images are usually produced at higher bit depths so, when composited with 8-bit video, the digitally-generated elements are reduced to the lower bit depth and the image quality can suffer.

Bit depth is only one aspect of a video file format. The quality of your recorded image will also be dependent on factors such as color sampling (e.g.: 4:2:0, 4:2:2 or 4:4:4) and the data rate at which it is recorded. However, having an understanding of bit depth will enable you to better evaluate which camera to choose for a particular job.