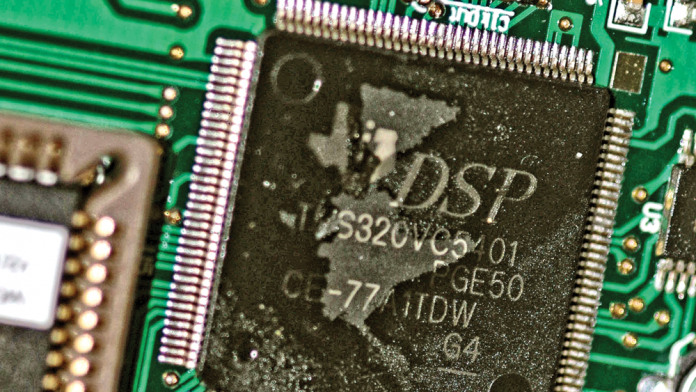 The world is analogue and video today is digital. Video cameras take analog light falling on a sensor and convert it to digital. After it’s been converted to digital, you can manipulate it — you can adjust the colors, the brightness, you can sharpen or blur it. There are a wealth of things you can do easily with a digital signal.

All these calculations are performed by a microprocessor.

Microprocessors are the engines behind computers — they make the calculations that turn your typing into letters on the screen. They figure out what supposed to be displayed behind the window on your computer screen when you close it. Microprocessors handle your music playback and they perform many mathematical calculations every second. They’re excellent at general purpose calculations. If you give a microprocessor a very difficult task, it may take a while to figure it out — this is called latency in lots of applications.

Latency isn’t a problem and we’ve gotten used to waiting around for our computers to figure things out. But when you’re recording video, if the video questions aren’t figured out every 30th of a second, you start missing frames. This is why digital video cameras almost always have a second microprocessor built-in, dedicated to video calculations. This is a Digital Signal Processor or DSP — the job of which is to perform repetitive mathematical tasks in real time. So, while your iphone’s main microprocessor is checking to see if you have an incoming call, running your email in the background and managing your Wi-Fi signal, when video is coming through the lens, those calculations are handed off to a second microprocessor.

The DSP performs a limited number of calculations, but they’re performed in an optimized method because the processor is expecting to perform only those functions.

The DSP performs a limited number of calculations, but they’re performed in an optimized method because the processor is expecting to perform only those functions. Imagine a cart filled with apples and oranges — the job is to separate apples from oranges and to count the number of each. If the main CPU separates them, the second processor’s job has been simplified to only counting, which it — the DSP in this case — can perform much more quickly.

Some of the jobs a DSP may be performing are:

Where will I find digital signal processors?

As a videographer, there are several places where you may run into a digital signal processor, though it’s possible you might never actually see one. Many DSP’s are chips built into the circuit boards of existing devices, but not all of them. Here are some places you may encounter a DSP:

A DSP in a home theater system or car stereo, do things like controlling when sound comes from each speaker so that it all reaches your preferred listening position at the correct time — a process known as “automatic room equalization” — or adding an echo to make it sound more like you’re in a theater or a concert hall. If you’re extremely particular about your audio, you may think the built-in DSP is inadequate and buy a dedicated unit.

Another thing your DSP will be doing in your home theater is recognizing and decoding a variety of input signals — is your audio encoded as PCM or Digital Dolby? The task of figuring that out is usually handed off to the DSP, which needs to make sure that not only the frame being displayed on the screen is linked to a specific portion of audio, but that the audio signal is being sent through each of the two or four or five or seven speakers at the exact right time so that they all reach your ears at the proper moment.

In your phone or camcorder, your DSP is making complicated decisions about how to handle light coming in through the lens to help you get the image you’re looking for.

SIDEBAR: Everybody likes their audio a little different.

Remember that scene in Risky Business where Tom Cruise’s father comes home and chastises him for meddling with the Equalizer?

Today’s DSP’s perform equalization much more precisely than an analog device without adding additional noise to your system. Many home theater DSP’s will allow a number of custom settings to be saved so that your parents can listen to their wimpy music the way they want and, at the press of a button, you can listen to Bob Seger the way he was meant to be listened to — and not only that, but video games, acoustic music and movies all have optimized playback settings controlled by the DSP.

Kyle Cassidy is an award-winning journalist and filmmaker from Philadelphia.