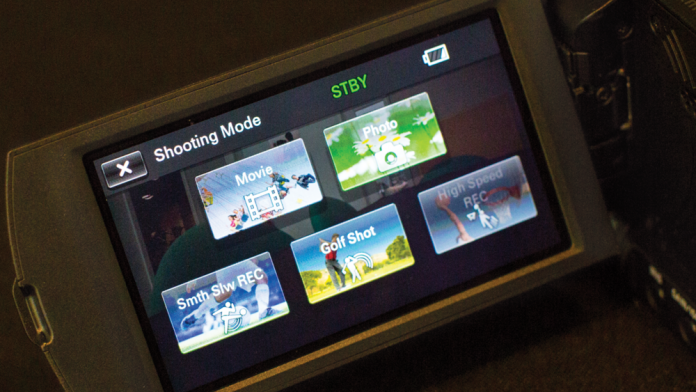 There are many, many camcorders on the market today — and not only that, the Digital SLR market has collided with the existing camcorder market, as has the point-and-shoot, and even the smartphone market. Today, it seems like almost everything shoots video. And, many things that shoot video — like your cell phone and a number of point and shoot cameras — actually shoot pretty good video. So what do you do if you’re in the marketing department of a video recorder manufacturer? Sometimes you’re lucky and you have a really good product that stands head and shoulders above the competition, but a lot of times you don’t. You’re given a product with average specifications and are told by the boss that you need to make it fly off of shelves. The easiest thing to do is add a gimmick — something that sounds great but really isn’t.

What is Marketing Speak?

Marketing Speak is a subgenre of corporate jargon; it’s a style of phrasing used to make a product seem more sophisticated or appealing. Often using words like “advanced” or “super” and then big numbers — e.g., “48 advanced shooting modes!” — sometimes marketing speak toutes an actual useful feature, but often it’s something not terribly useful. This is a gimmick.

The best example of a gimmick in recent history may be the “digital zoom” — which isn’t really a zoom at all; it’s just digital cropping and resizing of the original image — adding an extravagant degradation in image quality. So you can take a device which actually has a fixed focal length lens — a cell phone for example, and advertise on the box that it boasts a “4x digital zoom!” which does nothing in actuality but crop the video. Or they’ll add a digital “zoom” to an actual optical zoom: “10x optical zoom and 4x digital zoom 14x total zoom!”

It can be difficult to determine what’s actually a feature and what’s a gimmick.  Sometimes it takes a while for the jury to come in on whether something is a feature or a gimmick. Take 3D for example— it’s been around for years and has been extremely slow to catch on. If you’re buying a new camera, does it really need to shoot 3D?

It can be difficult to determine what’s actually a feature and what’s a gimmick.

Sometimes gimmicks don’t even require adding anything to the menu, but just the marketing department thinking creatively. When a marketer tells you that your new 4x  camera also takes “8.3 megapixel stills” they’re just talking about a frame grab from a 4K video camera. That doesn’t mean that this is a useless feature — it’s just an inevitable byproduct of 4K video.

Gimmicks are often buried in the menus, difficult to access, but easy to put on the box: “48 advanced shooting modes!” — and you’ll find them buried in the menus. Gimmicks are also sometimes things that might be useful to amateurs but something a pro wouldn’t use often. Things like “auto ISO” fall into this category. Having an ISO that increases to keep the aperture in a particular place is something that may save an amature video, but something that a pro would set manually. In-camera effects like black and white or, good heavens, “food mode” are things best left to post — because you can’t go back and un-shoot in black and white.

Watch: Get Better Footage out of Your DSLR Using Picture Styles

Gimmicks aren’t always apparent though, and sometimes they represent genuine interest by camera manufacturers in the industry, and turn out to be useful. If you go back through forums, you’ll find people wondering if HD is a fad. Things like electronic viewfinders and focus peaking initially had doubters, but I can’t imagine using a camera now that didn’t have a histogram in the viewfinder.

Sometimes new uses for technology appear to make things that previously seemed gimmicky useful — while most people may not be able to tell the difference between a 4K and a 2K picture, 4K technology becomes more apparently useful in spherical video when the pixels are dispersed inside a sphere three inches from your face rather than on a flat screen.

How to Avoid Getting Something You Don’t Need

Make a list of all the types of projects you see yourself doing. This will help you figure out if something like a high ISO, high frame rate or a wide aperture will be useful. If your camera is going to stay in your studio 24/7 weatherproofing won’t be as important as it would be if you’ll be filming animals in the jungle.

Research before you go — Videomaker is full of reviews and comparisons — have an idea of what you want before you go to the store.

Salespeople can be a terrific asset — don’t be afraid to ask their personal opinion of a feature: Is this useful? But also ask them about their personal video projects and what they use. If someone’s just reading the spec sheets, they’re not going to be as useful as someone who shoots video and knows what features their camera has and what ones they wish it had.

Don’t buy on the spur of the moment; a video camera shouldn’t be an impulse purchase. It’s a tool you’re going to be paired with for years. If a salesperson tries to sell you on something you don’t know about, make a note, do some research and come back, but do listen to what they say. Years ago I bought a mini-cassette player to record interviews and the salesperson tried valiantly to get me to buy a more expensive newfangled digital audio recorder instead. He swore it was going to be all the rage. I was skeptical and steadfast, and I think about that mistake every time I see that pile of mini cassettes in my top drawer and think that I really ought to digitize them.

Ultimately the only way to fight gimmicks is by learning about products, not just by reading articles about specific camera models, but also by coming to understand how technology marketing works. Researching trends and buzzwords will help you avoid unnecessary purchases; there’s no substitute for knowledge.