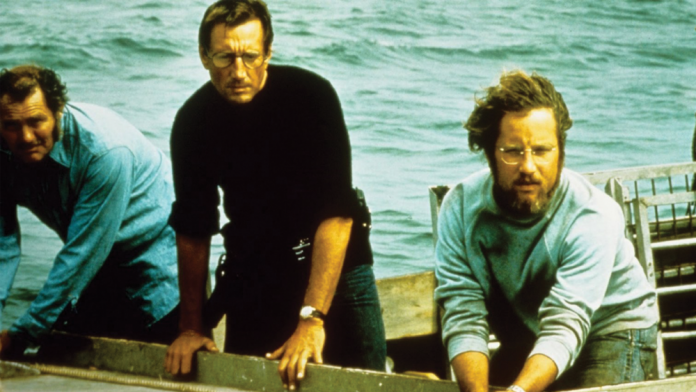 When I first saw the movie in the summer of 1975 I thought it was, in fact, a movie about a shark. But over the years I’ve come to realize that it’s not a movie about a shark. You can replace the shark with anything — drug dealers, werewolves, a collapsing economy; the movie is about three men who think about the world in very, very different ways but come, over the course of fighting together, to have a grudging respect for one another.

One of the most important scenes in the movie has almost no shark action at all.

One of the most important scenes in the movie has almost no shark action at all. It’s the scene where cantankerous sea captain Quint (played by Robert Shaw) wins the respect of the intellectual ichthyologist Matt Hooper (Richard Dreyfus, all of 27 years old at the time). Hooper had, up until this time thought that Quint was nothing but a brash loudmouth, but learning that he was a survivor of the WWII wreck of the USS Indianapolis, which dumped 1100 sailors into the water into a feeding frenzy of sharks that lasted more than a week, Hooper realizes that Quint knows a side of sharks that he will never learn in a classroom.

There are many subtle things that make this unassuming and unobtrusive scene work so well. Firstly is the careful balancing of the light — the windows reveal a dark blue, moonlit ocean and are not overdriven by the internal lights.

The first angle the camera takes is perpendicular to Quint and Hooper on opposite sides of the table. Note that their faces are lit by the overhead practical light, but there’s also a sharp shadow of the bottle on Hooper’s chest, indicating an additional off camera light.

Angle two is perpendicular to Brody. He’s removed from the action, watching while Hooper and Quint begin to bond over their experiences and decide to toast one another’s shark related injuries. Brody is lit by an off camera light to camera left and a fill to camera right.

Camera angle three moves to 45 degrees on Brody as he examines his appendectomy scar, wondering if he has anything to add to the conversation (he does not). Note lights coming from camera right and left, neither of which are the overhead practical lighting. The light from camera right is very directional, lighting up his hands and abdomen but not providing any fill on his face.

We then see Brody again from angle two, but zoomed slightly in. The camera follows him as he takes a step closer to the others, wanting to be part of the group, but oh so awkward.

We then cut back to camera angle one , where Hooper’s moved in and the camera has zoomed in on Quint.

In the first significant move on Brody , he’s now rule-of-thirds-ed up into a medium closeup and lit heavily by a light to camera left. This is probably the same key light that was illuminating the back of his head before. The other fill, which was very directional, is nowhere to be seen now.

Cutting back to Quint , we see the camera has moved in slightly. Hooper is an observer, sobered by his academic knowledge of the sinking of the Indianapolis. Note how the light raking across Hooper’s face is illuminating Quint’s face now in ¾ profile because he’s turned to face Brody, who is the one who asked “what happened?” Quint knows that Hooper knows what happened, which is why he’s telling the story to Brody, but we have to wonder if he’s not primarily talking to Hooper. During this scene you can follow the shadows to see the overhead practical move up and down over Hooper providing a small amount of illumination. The bulk of it, however, is coming from off camera lighting.

The camera cuts back to Brody for a reaction and when it returns to Quint and Hooper , it’s zoomed out. Why? Maybe to show off Robert Shaw’s clever acting with his hands, but maybe to let off on the tension momentarily.

There’s another cutaway to a reaction shot from Brody and then back to Quint, closer than ever before.

A cutaway to Brody again covers the first significant camera angle change in the scene).

Medium closeup of Hooper, but now he’s got an additional fill light on him, coming from Brody’s direction. You can see this if you follow the shadows of his head. This camera angle is also higher up than any of the others so far.

Cutting from this, we go back to Quint, now in a new camera angle.

Quint still has the original lighting from camera right, but we’re being prepped for the most important shot of the scene — as the tension builds over the next 50 seconds the camera zooms slowly onto Quint as he gets to the climax of his story.

More than any other scene in the movie, this scene lays out how three men — all Alpha Males in their daily lives — deal with a situation. College educated Hooper wants to study the shark, Quint, we learn, wants revenge for the crew of his ship, and Chief Brody wants only to protect the people of the town that has hired him to do so, and because his expertise is useless in fighting sharks, he finds himself in the uncomfortable, and unusual, for him, position of odd man out — all cleverly played out over eight minutes by Steven Spielberg and cinematographer Bill Butler.

Apart from just dissecting camera angles from watching the movie over and over and following the shadows back to figure out the lighting, there are things like behind the scenes documentaries, in this case “The Shark is Not Working” and “Jaws: The Inside Story” as well as books like screenwriter Carl Gottlieb’s “The Jaws Log” which provide interviews and behind the scenes photos and video that can help you figure out camera placement and lighting techniques. And more and more today there are directors commentaries and special features which can clue you in on how scenes are being made.

More than movie trivia, this insight into the production of your favorite scenes gives you the tools to improve your own projects.