We were actually in the process of creating such a package for a new pilot for a series called “The Theory Of…” when this story came down the pipe. Let’s use this as our example.

You’re definitely not going to use scratchy text for a science and theory show. For a movie like “Se7en,” that would (and did) work great, but not for this project. And you’re also not going to use a font that is super elegant, as you might for a Jane Austin movie.

We found a perfect font after scouring Fonts.com; it was even free! The font we chose is called “Neurological.” The title of the pilot episode for this series is called “The Flesh Eating Gulf,” referring to flesh-eating bacteria in the Gulf of Mexico. The font looked great!

Rule #1: make them short. It all started with the uber-simple opening credits of “Lost.” In general, don’t make television credits longer than 1-minute. Starting with the opening credits will let you come up with design elements that will work on all your titles and graphics.

We went with spinning circles that are both reminiscent of a futuristic user interface, and of a camera lens as our main design element. To further give the impression of “lensing,” we made the spinning elements an adjustment layer – a layer that applies an effect to every layer below it. In this case, we used the adjustment layer to add a bulge distortion. This gives the impression that the lens elements are refracting the image as glass would.

Also, we put in lens-flares and a lot of glow treatment. This gives the impression that everything is made of light. Why? When talking with the producers, they specifically wanted a feel of “enlightenment.” Of course, you could go with Buddhist imagery for this. But that doesn’t jive with the show’s science themes.

Finally, we decided that we’d render a whole new opening sequence for each episode of the show. The very background layer would be clips from the episode. For our initial design, we just used placeholder stock footage.

If this were purely a medical show, we may use a blue or green color as our base to match the color of medical scrubs. Again though, the creators used the term “full-spectrum” repeatedly with regard to the topics they’d cover. So, we went literal. The color scheme is a gradient that produces a full-spectrum of color – a rainbow – across the whole image. It’s a simple color layer that uses a Color Burn method to composite it.

The font we chose was already very stylized, so we didn’t want to go crazy with font treatments. We want it to be readable, after all. We simply added a glow – vertical only – to the text, which we keyframed to jitter. We made the 2D flat text on a 3D layer that rotates to add some motion to it.

THE FONT WE CHOSE WAS ALREADY VERY STYLIZED, SO WE DIDN’T WANT TO GO CRAZY WITH FONT TREATMENTS. WE WANT IT TO BE READABLE, AFTER ALL.

To transition from one set of text to the next, we just used a lens-flare. It’s simple, but looks great, and it adds to our glow feel.

These are the titles you always see on the news. They’re just like they sound; a lower-third takes up the bottom-third of your screen. They range from five to 10 seconds long. There’s two ways to approach these: 1) Entire lower-third done in a motion graphics package, and 2) Background for lower-third done in a motion graphics package, leaving the titles off for the editing suite. We’re going with first option, although the second option is much more common as it is faster. We’ve found that option one usually looks much better. By doing the entire lower-third in After Effects – our motion graphics software of choice – it will greatly increase our workload. However, it will allow us to do more with the titles.

For all the other titles, we’re going to utilize the same background from our intro credits. We have two-sections. The main section is a darkened version of the background to make the light text more readable, and the lower section is brightened so we can use black text. One helpful thing we’ve included is a black semi-transparent background behind the lower third. This allows you to see the video in the background while not letting it distract too much from the title itself. 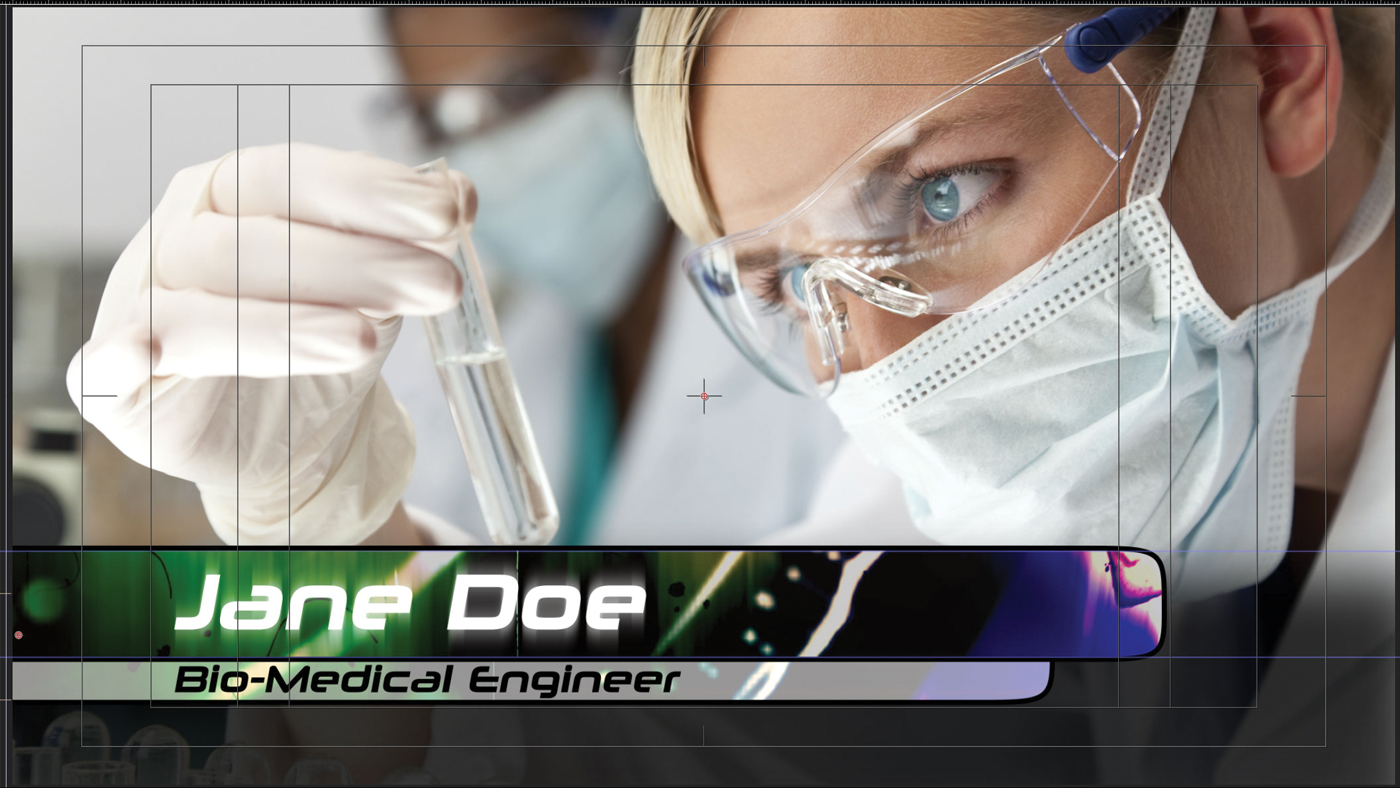 Much like a lower-third, the upper quarter is exactly what it sounds like. These usually denote a location or provide information emphasizing existing points. Once you have a lower-third, the upper-quarter is pretty much the same thing, just smaller and at the top of the screen. We use a still image as a placeholder – it doesn’t matter what you use, but you should use a placeholder for the video layer whenever designing your graphics.

Bullet text and a side-by-side – used for remote interviews – are pretty much the same screen. Just replace the bullets on the left with another video layer of the other talking head. Bullet text is used heavily in news shows. Think of it like a video PowerPoint presentation. The major points that someone is making are emphasized in these bullets. You generally don’t have to do a dark background or add a frame around the text, but our background has so much glow that we wanted just a bit more contrast.

There are some other graphics types used, for instance, crawlers on the bottom of the screen for news programs. These are usually similar to the lower thirds, but strips across the whole screen. You just need to allow for these crawlers on all other graphics. Lower thirds need to be higher, side-by-sides need to be cut off at the bottom, etc. And don’t forget to reframe your shots for the shortened viewing area!

As you can see, creating graphics packages isn’t terribly difficult. Where the talent lies is with reading what the feel of the show is, as well as the look that the producers are going for. Just tailor your graphics, fonts, and treatments to keywords you hear in the conversation with them. Also, when possible get a copy of the theme music so you can match the mood!