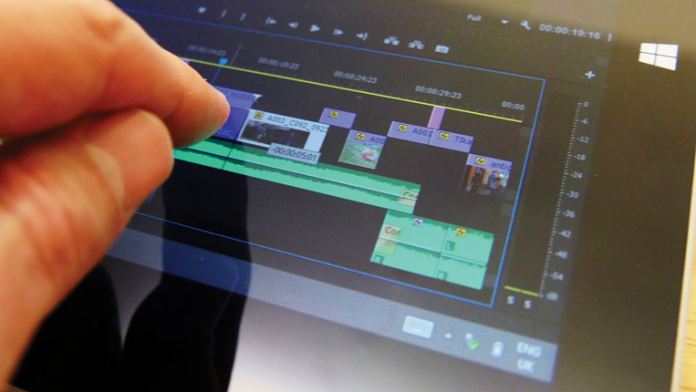 This year’s release sees a true integration of mobile apps that goes beyond novelty for video producers. Adobe’s focus seems to target the efficiency of creative tools, allowing you to integrate your various post-production tasks, as opposed to keeping them segmented.

The launch of Creative Cloud several years ago saw the onset of mobile apps in the Adobe workflow, but initially mobile apps from Adobe didn’t serve users as fully integrated production tools. With Adobe CC 2015, Adobe launches Hue CC, a color profile app that allows users to create custom color profiles to apply to their footage in Adobe Premiere Pro, After Effects and other Adobe applications.

Hue CC analyzes the color profile of the picture and renders a 3D user interface that highlights the hue and lightness of samples throughout the image.


Adobe Hue CC works on iOS devices. With it, you take a picture with your iOS device’s camera. Hue CC analyzes the color profile of the picture and renders a 3D user interface that highlights the hue and lightness of samples throughout the image. Through this interface, you are able to make selections and adjustments to make and a save a unique color profile or “look.” This “look” is stored in your Creative Cloud Libraries. Adobe Premiere Pro and After Effects are now able to directly access your CC Libraries, from which you can drag and drop a “look” created in Hue CC directly onto your footage.

Mobile isn’t the only environment with entirely new applications is this release of Creative Cloud. Adobe Character Animator is a brand new desktop application that allows you to animate 2D characters in real time through your computer’s camera and microphone. You can create a character puppet rig in either Adobe Photoshop or Illustrator and import the file into Character Animator. Character Animator uses facial tracking and audio cues to map movement, mouth positions and facial expressions to the puppet. It also uses a combination of user-assigned keyboard triggers and a physics engine to make uniquely animated characters. Scenes from Character Animator can be imported into After Effects and Premiere Pro for compositing and further editing.

Adobe Premiere Pro benefits from several updates in the 2015 release, including a new Lumetri Color workspace, task oriented workspaces and access to Creative Cloud Libraries. Another new feature is the Morph Cut. Morph Cut is a transition effect that analyzes shots to build a seamless transition over a jump cut in interview situations. The frame interpolation and face tracking that is used in Morph Cut requires that the shots used in the transition are similar. It only works when building a transition on the same subject, using the same camera shot. Morph Cut is useful on interview edits when sound bites are taken from the same subject and assembled together. In the past such jump cuts would need to be covered by B-roll, now they can be smoothed over using a simple transition effect.

Adobe Media Encoder CC doesn’t always get the credit it deserves, but the new Time Tuner feature shows that Media Encoder CC is much more than a render engine used for transcoding. Time Tuner is found under Media Encoder’s “Effects” tab. It allows the user to alter the run time of their video without having to cut short any shot. For example, if a user needs to output an edit at 15 seconds exactly but their video runs for 16 seconds, they can apply Time Tuner on output to alter their video’s length without altering it or creating any distortion by selecting and removing unnecessary frames. In other words, the video won’t appear to be sped up or sound as if it is running fast. It’s a tool that is useful for individuals who are making time sensitive spots.

Adobe Audition CC is useful for audio sweetening in the Adobe post production workflow. It is now more tightly integrated with Adobe Premiere Pro CC through dynamic link video streaming. It used to be that users would have to render out their Premiere Pro timeline to have a video that would play in Adobe Audition, the visual was useful for syncing the audio, but it was a fixed visual. Each time you changed the video in Premiere Pro, you would have to take the time to render a new video for use in Audition, and as a result audio post work usually didn’t start until an edit was completely final. The new dynamic link video streaming plays the native video from Premiere Pro CC directly in Audition CC, meaning that when you make a change in Premiere Pro, the video is automatically updated in Audition. This includes changes to dynamically linked After Effect compositions embedded in Premiere Pro, making the Adobe Creative Cloud much closer to being a fully integrated post-production environment.

Adobe continues to update their software by introducing robust features and new applications in the Creative Cloud. The 2015 updates are innovative and show Adobe’s continued commitment to providing powerful video production tools.