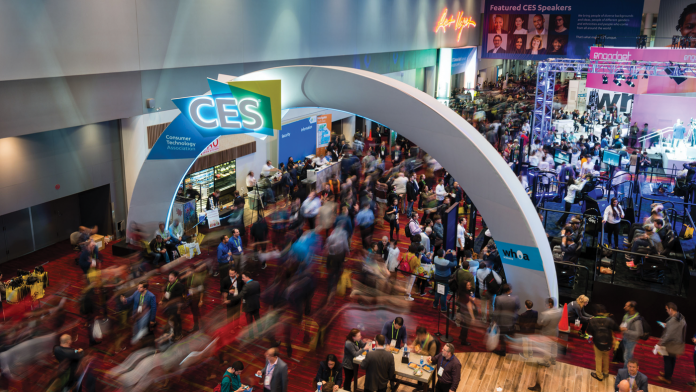 This year's CES was a wet and wild ride. A rainstorm rolled into Las Vegas during the show — yes, two inches of rain is considered a storm there — and the downpour led to the failure of one of the transformers that provides power to the Convention Center. This caused a nearly two-hour blackout to much of the CES show floor. But that little bit of rain wasn't enough to stop the 100,000+ attendees from checking out the latest innovations in technology.

The Future of The TV

New televisions always dominate a lot of show floor space at CES. They also draw a large amount of attention from the attendees. This year was no different. While many manufactures showed off 8K televisions, as they had last year, Samsung brought in something new. They called it “The Wall,” and it is the world's first modular LED television. Samsung's prototype, which was displayed in their booth, was comprised of multiple 9.37 inch LED panels to create a single 146 inch 8K television display.

With the limited number of titles available on 4K Blu-ray and on 4K streaming services like Netflix and Amazon, many have questioned the practical use of 8K TVs; however, you really can't think of “The Wall” as just a television. A modular display like this has the ability to replace multiple monitors and screens. That's where the 8K resolution makes a difference. Imagine being able to attach your editing computer to a display like this where you can preview 4K footage in a window that's pixel for pixel and still have plenty of room for your editing interface. Or, you could sit on your couch with a television show playing on part of the display while you could use other sections for social media sites or shopping. Essentially, it gives you the ability to take your second and third screen devices that you use while watching television and have it all displayed on a single monitor.

LED walls for commercial applications such as outdoor signage as well as video screens for concerts and events have been around for years, so this technology is not an entirely a new one. What's unique is that Samsung has packed a lot more pixels into their panels than what we have seen in traditional LED walls. “The Wall” has a resolution of 7,680 x 4,320 for a display that is just over 12 feet diagonally, whereas a traditional commercial LED wall, at that size, might only have a resolution of 1,280 x 720. Size and resolutions are not the only advantages of Samsung's new display. At 2000 nits, it is much brighter than traditional, large LCD screens.
LED walls, typically, have been designed to be modular, which Samsung appears to be embracing. Depending upon the space, you have to set up the display or the aspect ratio that you would like the screen to be. You can adapt the configuration of the panels to suit your needs. If you want the screen in the 1:1.43 aspect ratio of IMAX, the 1:2.35 of Cinemascope, or something in between like the 1:1.78 (16×9) of television, you can arrange the individual panels to your liking. Because these panels are bezel free, you may be able to add more panels in the future to make the display even larger.

We don't expect to see Samsung releasing “The Wall” at a price point that most would consider affordable anytime soon. However, when you consider how quickly the price of 4K TVs has dropped since they first hit the market a few years ago, we should expect to see similar consumer LED walls released to the market at price points close to or possibly even cheaper than the current cost of an 80 inch 4K television. Additionally, this would also ensure that the cost of professional LED walls will continue to drop. This means that not only will these LED walls be a lot more affordable for video professionals, but you'll also see an increase in their usage by businesses. Content creators should see the availability of a lot more video work for these new, large format displays.

A 65-inch monitor hardly seems huge given the size of many of the displays on the CES show floor. However, with most gaming monitors maxing out at 27-inches, it really is a large jump in size. For content creators, these monitors offer an increased frame rate and color gamut coverage, which is quite an improvement compared to most monitors available today.

If you are one of the few people who got to see Ang Lee's film “Billy Lynn’s Long Halftime Walk” projected as it was shot in 120 frames per second (fps), then you’re familiar with the unique visual look of that frame rate. At 120fps motion blur is almost entirely eliminated, which creates a hyper-real aesthetic where objects in rapid motion are rendered sharply. Until recently, only a few projectors supported 120fps, but this new series of monitors will now support that frame rate. In addition to natively supporting 120fps, these monitors will also support other popular frame rate standards including 23.976, 24, and 25fps natively utilizing G-SYNC HDR from Nvidia.

BFGD monitors will utilize full-array direct backlighting with 1,000 nit peak luminance; it also supports HDR content. Additionally, the monitors are expected to cover the entire DCI-P3 color gamut, the required coverage for digital cinema projectors. This is very close to the Rec. 2020 color gamut for 4K television.
With the wide color gamut coverage, multiple native frame rate support and high peak brightness, these monitors will be very useful as preview or director/client monitors in post-production work. Prices are not yet available, but the first of the BFGD series monitors are expected to be released this summer.

At this year's CES, the trend of improving on existing technologies was evident with the new camera models shown.

The GH5S is an update to last year's GH5 from Panasonic. The new model has a 10 megapixel sensor as compared to the GH5, which has a 20 megapixel sensor. This is due to the fact that the GH5S is specifically designed for video capture. The larger individual pixels of the Micro 4/3 sensor create less noise and are better suited for low light video capture. Combined with the dual native ISO originally seen in the Panasonic Varicam, the GH5S could have shooting results in low light that would rival the Sony a7S II.

Combined with the dual native ISO originally seen in the Panasonic Varicam, the GH5S could have shooting results in low light that would rival the Sony a7S II.

LG showed off the new V30 phone with dual rear cameras. The specs of the rear cameras and lenses are similar to those in phones from Apple and Samsung, though the V30 really stands out in its ability to record 10-bit video. That's a feature that many professional video cameras lack. Video in 8-bit gives you 256 color values for red, green, and blue (RGB). Increasing to 10-bit video gives you 1,024 RGB values. In 8-bit video, you have over 16 million possible colors; in 10-bit video, there over 1 billion possible colors. The extra variation in color that 10-bit video offers can be very helpful in post-production. Additionally, the V30 comes with video editing software on the LG phone.

Over the next year, we can expect to see these trends continue. As 4K has become the dominant resolution for cameras, we're likely to see more cameras released that are improvements on the existing models. This means you're more likely to find a camera that is well-suited to match your workflows than the one-camera-fits-all models.

Bitcoin, Kodak, Gaming, AI: What It All Means for Us

The past few months have shown a large increase in the interest in cryptocurrencies like Bitcoin. Mining for many of the cryptocurrencies is done with computations done by high-end gaming video cards. This year at CES, Kodak even had a branded cryptocurrency mining machine on display in their booth, which they said would soon be available. Likewise, much of the research being done in artificial intelligence and machine learning utilizes video cards for computations. The new demands for video cards combined with the traditional demand of PC gaming has led to a shortage of high-end gaming cards. These are also the same cards that have become popular for film and video post-production work. Some retailers have been selling Nvidia and AMD cards for up to double their MSRP, with some of the cards being completely sold out.

AMD and Nvidia are working toward meeting product demands so the shortage of high-end video cards shouldn't last very long. Over the long term, the increased interest in high-end video cards, outside of their normal utilization for gaming and post-production work, should lead to a greater variety of cards being available at lower prices.

Intel and AMD Partner Up on 8th Generation Core Processors

Surprisingly, the two rival chip makers announced their partnership last November after decades of battling each other in the central processing unit (CPU) market. At this year's CES, they released details on the upcoming chips that the two companies have collaborated on.

In the past few years, many laptop manufacturers have been using chips that combine a CPU and a GPU (graphics processing unit) on a single chip for ultrabooks, convertibles and mid-range laptops. While this has helped make new laptop models more affordable, the Intel graphics processors often lack the power needed for many post-production workflows. At CES, Intel announced their new i5 and i7 CPUs with AMD Radeon RX Vega M graphics. Intel claims that these new chips will have faster graphics capabilities than the current generation of discrete graphics cards for laptops. The new CPUs will also provide longer battery life than systems with discrete graphics cards. This will make finding an affordable laptop for post production work much easier. The new 8th generation i5 and i7 processors are scheduled to release sometime in the first quarter of 2018.

Many of the exciting new products shown at this year's CES already have a history of use and reliability behind them. This is great for those of us in content creation because it means that we should be more comfortable when using this new tech.
This year's show was more about adapting and improving these existing technologies. If you've been waiting to buy a 4K camera and rig, these new improvements should ease your doubts. The demand for 4K content has never been greater, and the future continues to look promising for content creators.

Once again at CES, there were many hoverboard and Segway-style small electric vehicles on display; however, the IOTAtrax stood out. It’s a small, two wheel, self-balancing vehicle built by Inventist, the same company that built the Solowheel and Hovertrax. The IOTAtrax has two 8-inch wheels and  is very small, weighing only 15 pounds. Its small size makes it an interesting option for getting dolly shots on smooth surfaces or for just getting around a location quickly. The IOTAtrax is now available for pre-order from the Inventist website.

Odin Lindblom is an award-winning editor and cinematographer whose work includes films, commercials and corporate videos.