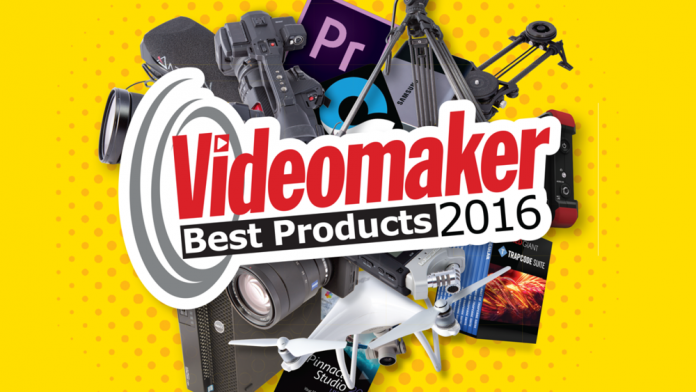 Each year Videomaker’s Editors get together deep below the Earth's crust in a secret bunker and fight to the death over what products will be selected as the best of the best. Knives were brandished, guns were pulled and many foul words were spoken, but alas out of the ashes we arose victorious and created this list. For this year, it is the list to end all lists.

All of the prior could be true, but is most likely fabricated. Either way, all products considered must have come through our editor's hands either through review or evaluation. Without further ado, here are Videomaker’s Best Products of the Year 2016.

A good tripod is a must, but doesn't often come with an affordable price tag. With the FSB 10 Sachtler was able to make a robust tripod with a sizable payload, quality legs and a fluid head with a 100mm ball for under $4,500. Now that's not chump change, but it’s a great price for what's offered. The Sachtler FSB 10 is a quality tripod with a modest price that will last a long time! Congratulations to Sachtler with the FSB 10- Videomaker’s Best Field Tripod of 2016.

The Rhino EVO Slider a is an affordable and fully capable addition to any production arsenal.The Rhino Slider EVO is lightweight and easy to use. When teamed up with Rhino Motion, you have a very strong storytelling tool for $1,100. It’s an affordable option to those that are looking to invest in a slider or motion controller. If a motion controller isn’t for you, then the Slider EVO and the Flywheel make a great team for $575 together. We were super impressed with the EVO Slider, enough that we use it daily. Congratulations to Rhino with their EVO Slider, Videomaker’s Best Advanced Support System of 2016.

The Zoom H4n Pro is affordable at $200, and it does a lot! Zoom improved the mic pre-amps in the H4n Pro to the same ones found in the H6. The casing also looks to be a bit tougher than its predecessor. With the H4n Pro, Zoom continued the same product they were selling without changing any of its good parts. Congratulations to Zoom with the H4n Pro, Videomaker’s Best Best Audio Recorder of 2016.

The Azden SMX-30 is a mono/stereo switchable video mic that has a robust build and performs well for its price ($250). It can record both mono and stereo by offering two separate capsules for switchable function. Have some dialogue to capture? Put it in mono mode and you will have a camera-mounted super-cardioid shotgun mic. Need to capture the atmosphere for your scene to come alive? Switch it to stereo mode and you’ll record a stereo image with 120 degrees of coverage via two cardioid mics working in tandem. Congratulations to Azden with the SMX-30, Videomaker’s Best Microphone of 2016.

The Panasonic AG-DVX200 is a beautiful camera that shoots beautiful footage. It has a nice form factor and good shallow depth of field for a fixed-lens camera. When form and function meet up, you know you really have a winner. The Panasonic AG-DVX200 has stunning looks, and it’s form-factor lent itself to easy shooting, and with V-Log, it gets great dynamic range. We were surprised at its low-light capabilities and that shallow depth of field is possible with a camcorder. We can only sum it up with these simple words: The DVX200’s picture is as pretty as the camera itself.  Congratulations to Panasonic with the AG-DVX200, Videomaker’s Best Fixed-Lens Camera Over $1000 of 2016.

With beautiful 4K images, internal 5-axis image stabilization and an amazing ability to shoot in low light  this is a great camera for low budget filmmakers or as a solid B-camera. It’s hard to complain when you get a full frame 4K sensor with 14 stops dynamic that can shoot in extremely low light for under three thousand bucks. Sony has really put the ability to shoot a stunning image into the hands of low budget filmmakers. Depending on your needs, the Sony a7S II is a great choice. Congratulations to Sony with the a7S II, Videomaker’s Best Interchangeable-lens Camera Over $1,000 of 2016.

With the release of the a6300, all Sony alpha cameras can shoot 4K. It’s a compact interchangeable-lens mirrorless camera with a Super 35 image sensor that shoots 4K, 120 frames per second in 1080 HD and can shoot in both S-log2 and S-log3 picture profiles. It has great features, looks awesome and is at an easy entry-level price point. It checks just about every box for the masses. We think it’s a great camera for the money. Congratulations to Sony with the a6300, Videomaker’s Best Interchangeable-lens Camera Under $1,000 of 2016.

The GoPro HERO5 Black has some new features that are very useful. Offering new features like voice control, wind reduction, waterproof shooting down to 30 feet without an underwater housing, a rear touch screen and image stabilization, the camera also comes with a lower price point from past HERO Black cameras at $399. The image quality of the HERO5 Black is good and we really enjoyed using the voice control. Congratulations to GoPro with the HERO5 Black, Videomaker’s Best Speciality Camera of 2016.

The Phantom 4 blew our socks off. With wonderful flight characteristics and great looking video, DJI has the formula down for making great drones. The more impressive feat is that even though the phantom 4 is our favorite it just barely beat out the DJI Mavic, that speaks volumes to the value of the Mavic. Because the controller was a bit nicer to use because of its larger size and without shooting D-Log, the Phantom 4’s video looked a bit better than the Mavic, the Phantom 4 won out. If you have never flown a drone, the DJI Phantom 4 is a great start. Or if you have flown other drones, it’s still a great choice. Congrats to the DJI Phantom 4; you are Videomaker’s Best Drone of 2016.

Atomos released three monitors that are almost exactly the same: the Ninja Flame, Shogun Flame and Shogun Inferno. The Ninja Flame is bright, robustly built and looks great. The price is great and for our audience, the HDMI only capabilities of the Ninja Flame make it the best buy and a fantastic product. Congratulations to Atomos with the Ninja Flame, Videomaker’s Best Field Monitor of 2016.

The Flapjack is perfectly named. It’s flat and round like a pancake. The Flapjack Studio is a dimmable, bi-color LED light with an innovative design flexible enough for either studio or field use. Fotodiox gave us a beautiful soft light and kept it super affordable at under $550. Congratulations to Fotodiox with the Flapjack Studio, Videomaker’s Best Light of 2016.

When it comes to storage, who doesn't like having fast read/write speeds, a large capacity and a small and light form factor? The Samsung T3 is small, but don't let that fool you, the capacity of the T3 can be as large as 2TB. With up to 450MB read/write speeds, moving big files is a breeze and won't take you all day. Congratulations to Samsung with the T3, Videomaker’s Best Storage of 2016.

The Dell Precision T7810 series tower can be configured to fit any need and budget. The case is stout and good-looking. With a $1,500 – $35,000 price range, your expectations for the 7810 should follow your investment. Be sure to research what configuration will get the best bang for the buck according to your needs and wants. Congratulations to Dell with the T7810, Videomaker’s Best Workstation of 2016.

Gopro set out to make a simple and easy to use editor that can be used on the go with your phone or tablet or on your computer. Quik makes dynamic automatic edits with your footage. It's a great platform to get started making videos and won't take you much time to learn. Congratulations to GoPro with Quik, Videomaker’s Best Introductory Editing Software of 2016.

The powerhouse of production software, Adobe continues to improve with every iteration. Seemingly the overwhelming standard of the industry, Adobe has put a lot of value into Premiere Pro CC and because of the monthly subscription, updates and improvements are included! There isn't anything out there that does it as completely as Adobe can. Congratulations to Adobe with Premiere Pro CC, Videomaker’s Best Advanced Editing Software of 2016.

The incredibly talented developer of Trapcode has created some classic Adobe After Effects plug-ins over the years. The Trapcode Suite 13 update only cements its status as the go-to place for amazing particle effects. Along with some updates to iconic products, this update adds an interesting new plug-in, Tao. In Trapcode Suite 13, available from Red Giant Software, users get updates to every part of the package, all of which add new features or speed up rendering times. Congratulations to Red Giant with Trapcode 13.1, Videomaker’s Best Plug-in Suite of 2016.

It's been a great year for creative professionals with these new and exciting products. We want to extend a special thanks to all of the brands for making the products available to us to review and a thank you to our audience for continuing to value and enjoy our reviews. Its an honor to put these products through the paces to evaluate their value, quality and innovation. Congratulations to all of the winners and the teams that made them happen. Cheers!

As we looked back over the year, we found a few products that we felt deserved more recognition. These excellent products have therefore been awarded retroactive Editor’s Choice awards to acknowledge their outstanding features and value.

DJI Osmo – The Dji Osmo is fun to use. The gimbal works well and the image quality is superb. Add that to a great price and you have a really wonderful piece of gear.
RED RAVEN – The Raven is like no other product in its price point. Dynamic range for days and with the aid of HDRX, there won't be any shot that you aren’t able to get.
GoPro OMNI – From start to finish GoPro made a simple six camera spherical video rig that is easy to use. It's a turn key solution to those looking to shoot spherical video, it even includes the stitching software. We were super impressed!
Canon 1DX Mark II – The 1DX Mark II has that Canon look and it shoots 4K. Add in 60p in DCI 4K and a bit rate that will fill your hard drives. The look of the video and the feel of the camera are awesome. It’s also the flagship photo camera, too. We like it so much it’s our daily driver.
GoPro Backpack – You would think something simple like a backpack would have a hard time impressing someone. Well, GoPro made the perfect bag for their cameras and accessories. It’s got mounts built into the shoulder strap and has a chest mount that can be easily configured. The GoPro Seeker does it all; that's why we like it!