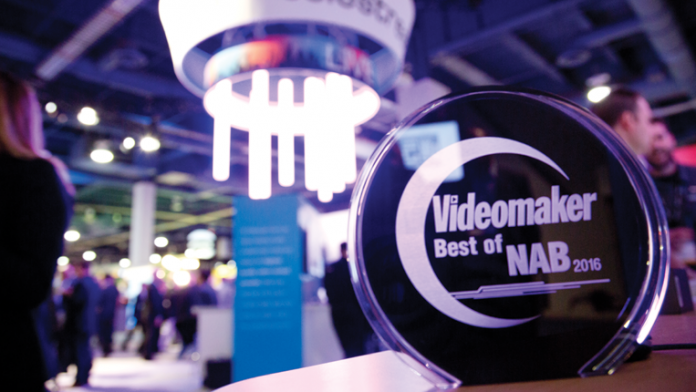 One category, however, is notably absent — Best Camera. With all the amazing new gear announced at NAB this year, we were surprised by how few cameras made their debut. Most of the cameras we saw were either slight iterations on a previously released model or priced well out of the average shooters budget, so we decided to bypass the Best Camera category all together to make room for other releases to be recognized.

With that said, we’re excited to present Videomaker’s Best of NAB 2016 award winners.

There are always lots of new lenses announced at NAB every year, but the new Canon COMPACT-SERVO 18-80mm T4.4 lens was truly special. Most of us can’t even afford to rent some of the lenses on the show floor, let alone the camera to use them. Canon’s COMPACT-SERVO 18-80mm T4.4 is the exception. While the $5,225 price tag is nothing to scoff at, it’s a steal when compared to Canon’s other EF servo zoom lenses, which approach $30,000.

An optional add-on to the COMPACT-SERVO 18-80 is a zoom rocker grip. When combined with a C100, the setup begins to feel like a true ENG camera — great for shooters who want to combine run-and-gun shooting techniques with a Super 35 camera.

While not without its flaws, most notably the minimum T4.4 and lack of hard stops on the focus ring, the COMPACT-SERVO 18-80 is primed to be an exceptional offering.

The Shogun Inferno is Atomos’s newest flagship monitor and recorder. It features a bright, 7-inch, 1500 nit, 10-bit touchscreen display and 4K recording at 60p and HD at up to 240 fps in 422 ProRes or DNxHR, with RAW to RAW CDNG recording up to 4K DCI/UHD 30p or 2K/HD up to 120p. On top of the HDMI and SDI input/output options, the Shogun Inferno also includes PQ input and output for monitoring in post-production.

The key feature to the Shogun Inferno lies in the facilitation of an HDR workflow. The Shogun Inferno uses AtomHDR image processing to display more realistic colors in the image from cameras shooting in Log. At the same time, the original Log image is captured for grading and manipulation in post-production. The ability to apply 3D LUTs also brings the image displayed on location even closer to the final product, as do options for de-squeezing anamorphic content.

The Atomos Shogun Inferno is available for $1995.

DJI’s reveal of the Matrice 600 was certainly a surprise for us, considering DJI’s dominance in the consumer drone industry. We were beginning to suspect that they may begin to favor the quadcopter category over that of hexacopters, but not only did they prove to us that that’s not the case, they announced a hexacopter that appears to be both highly capable and highly approachable.

The six-rotor M600 can support a maximum payload of 6 kilograms or about 13 pounds, so in addition to the full range of Zenmuse gimbals, the M600 can also support the Ronin MX gimbal.

Six smart batteries power the M600 with flight times estimated at between 16 minutes for heavier cameras and 36 minutes when flying with the Zenmuse X5.

The tech-specs of the Matrice 600 are impressive, but it’s really the price that caught our attention. In fact, at the reveal event, an audible gasp swept across the room when the price — $4,600 — was announced. What’s the catch? Time will tell, as we hope to get some flight time with the Matrice 600 soon. Until then, we’ll watch and wait.

The edelkrone JibPLUS is a jib add-on that automatically tracks a user-selected target, allowing the operator to be concerned only with the movement of the jib body itself. The JibPLUS automatically pans, tilts and focuses to keep the target in frame and in focus while the operator controls only the jib arm.

Up to three separate targets can be stored within the control module for easy switching between subjects. With the touch of a button, the JibPLUS can then retarget and refocus to any of the saved targets on command.

The kit includes a controller, a sensor module, the 2-axis motorized head and the focus motor and can be attached to any jib. The focus motor is also compatible with all lenses. Though we only saw a prototype of the technology, we were impressed with the ease of use and expect even more usability from the production models when the JibPLUS comes to market.

The GoPro Omni holds six GoPro HERO 4 Blacks in a camera cage specifically designed for capturing immersive video. When combined in post-production, the six individual video files produce a 360-degree spherical video file with a resolution of up to 8K.

Doing more than simply hold the cameras in the correct arrangement, the Omni uses smart synchronization between all six cameras, promising precise camera positioning and easy identification of the source camera for each video file. This ensures that the six video streams can be easily stitched together in post-production for a seamless spherical image.

The 120mm cube is compact enough for a variety of shooting scenarios, while aluminum construction makes for lightweight durability. Omni is powered using either in-camera batteries, or you can use an external power supply for longer recording sessions.

The GoPro Omni will be available in August for $1,500, or as part of an all inclusive bundle with six HERO4 Blacks, microSD cards, and external battery and more for $5,000.

The Kino Flo Diva-Lite LED 20 and 30 represent the first time Kino Flo brings LED technology to the popular Diva-Lite lineup. With a CRI of 95, Kino Flo promises a bright, color accurate white light that will not flicker or suffer color shifting when dimmed. The Diva-Lite LED lighting system features an adjustable color temperature range of 2700K to 6500K and includes controls for green and magenta correction.

In addition to rear control panel, users can also control the light remotely using Kino Flo’s wireless DMX control. The Kino Flo Diva-Lite LED comes in two versions, the LED 30 and the LED 20. Both versions are set to be available starting in August 2016.

Next up is the DPA d:screet Slim 4060 Omnidirectional mic. This thing is tiny — nearly invisible in fact. DPA is known for their high-quality mics and we expect this one to be no different.

Unlike other mics which tend to conform to standard form factors, the d:screet Slim 4060 hides underneath the wearer’s clothing and just barely peeks through a buttonhole. The result is a mic that it so inconspicuous that it may go unnoticed by observers standing an arm’s length away.

The d:screet Slim 4060 requires phantom power but can be used with any wireless transmitter or wired connection that supplies it. It retails for $520 and is available now.

The new updates to the latest preview of Adobe Character Animator bring improvements to the animation workflow to give creators more control over character with less work.

The most recent Character Animator updates simplify the process of rigging a character for animation with several new features, including an improved tagging system that eliminates the need to remember and use specific keywords when building your character. Now you can use either visual or verbal tags to identify the character’s different elements right in Character Animator.

Animating multi-view characters has also been simplified, now requiring only one set of sync behaviors, while the new Motion Trigger feature automatically animates characters according to how they are being dragged within the frame.

Telestream Wirecast is a software solution for live switching and streaming. New this year is the ability to stream to Facebook Live.

One of only a few products that gives access to streaming live to Facebook from something other than an iOS or Android device, Wirecast allows for simultaneous streaming to Facebook and Youtube, giving the user the ability to have a higher quality feed and use professional cameras, microphones and switching abilities.

Wirecast is also an affordable switching option for live events, news and sports, education and houses of worship. Add titles, lower thirds, transitions and even live keying to your production with Wirecast.

NewTek’s NDI for Creative Cloud allows you to connect directly to a live production workflow over IP. The plug-in simplifies the review and approval process by allowing better collaboration between different teams in different locations, giving more flexibility to a live-to-air workflow.

NDI for Adobe Creative Cloud enables an editor to continue to edit their story up to the minute of a live broadcast. In essence, NDI gives a standard network connection the ability to make the output of Adobe Premiere Pro CC a source for a director to use for insertion into their live broadcast.

Directors and producers of live broadcasts will gain more time to review created content for a better more compelling story, and stories can stay more up to date, so that live broadcasts can better keep up with the pace of breaking news. NDI for Creative Cloud is available now for $99 per system.

The AJA U-TAP HDMI is a handy little black box that connects the HDMI output from your camera or other device to your computer via USB 3.0 for easy media capture on a variety of platforms.

The AJA U-TAP HDMI consists of only one HDMI input and one USB 3.0 output, making it extremely simple yet effective in capturing both audio and video signals to your computer. Because the U-TAP HDMI does not require any new drivers to be installed, it’s easy to connect wherever you go. This, combined with its pocketable  3.3” x 2.4” x 1.0”  design, makes the U-TAP HDMI easy to use and very portable. The device weighs only 0.3 lbs.

The U-TAP HDMI supports the capture of resolutions and frame rates up to 1080p and 60 fps and is compatible with Mac OS X, Windows and Linux systems. It works with a wide range of software, including Skype, Adobe Connect, Wirecast, TwitchTV, Ustream and YouTube Live, among others. The AJA U-TAP HDMI is available for $345.

As a quick explanation of this impressive technology, Lytro Cinema uses an ultra-high resolution 755 RAW megapixel sensor to capture extremely detailed Light Field data — including color, direction and position for each pixel. This allows creators to make decisions in post-production that would normally be locked in on set.

Focus point, depth of field and relative camera position can all be adjusted in the edit bay, allowing cumbersome effects such as chroma keying to be achieved much more easily and with less preparation. The Lytro Cinema camera represents an amazing achievement that simplifies many traditionally difficult or impossible post-production tasks.

These awards represent only a handful of what we saw — and didn’t see — at NAB 2016, and while we love these products, there are certainly more worthy candidates we may have missed. We want to thank all the brands who took the time to meet with us during the show, regardless of whether they are recognized here. We had a great time nerding out with fellow video geeks, and we can’t wait to do it again next year.