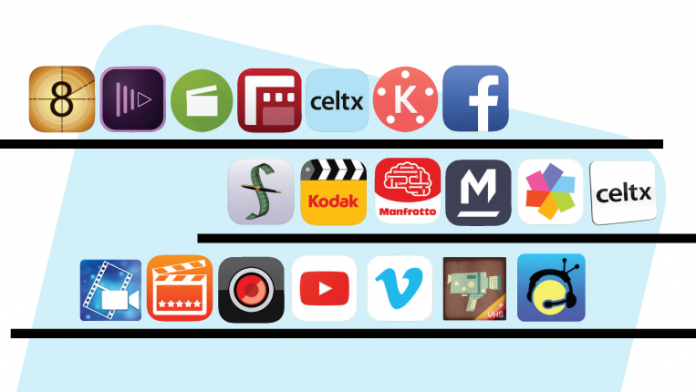 We found some great solutions to turn your phone or tablet into a powerful production tool. In most cases, we tried to  limit ourselves to apps that have been on the market for a while and have good ratings on the two major app markets: Google Play for Android and the Apple App Store for iOS. We’d always suggest that you read the reviews before you buy any app and if it’s possible, try before you buy. Some app developers have free versions with limited functions so you can take them for a test drive.

Because the cost of the apps may fluctuate, we’ve tried to give an easy cost measurement. Occasionally, app makers put their wares on sale or even offer them free for a limited time. (Yes, there are apps to track the price of apps.) To help understand the costs, we’ve come up with a simple rating system:

Celtx has found it’s way onto many screenwriter’s computers simply because of the cost; it’s free. Over the last few years, they’ve also developed apps that work on both Android and Apple and allow you to write anywhere. You can even switch back and forth between phone, tablet and desktop seamlessly with their cloud based storage called Celtx Studio. The basic scriptwriting package, a variety of production tools and cloud storage is all free. There are collaboration packages available starting at $8.25 per month.

Final Draft has been the gold standard for script writing programs for some time. They have only recently added a mobile app. It’s currently only available for iOS. The app has all the features of the full version, including SmartType, which remembers character names and scenes. You can use Dropbox to switch between devices. There’s also a free Final Draft Reader available for anyone who needs to view the script but not make changes, like actors and crew.

If you need to use Final Draft on your Android device, DubScript is a great solution. This app will import and export files in FDX (Final Draft) format. It uses industry standard formatting and, if your device allows, can input with your voice. DubScript can even read your script back to you.

Another great free tool from Celtx is Shots. It’s currently only available for Apple iOS. This one is also linked to your Celtx Studio, so it can be used across your platforms. This is a great storyboarding app, but it also includes a space to block out shots linked to the storyboard. It includes a collection of artwork that includes actors, cameras and lights for those of us who can't draw.

For more detailed pre-visualization of your production, Shot Pro gives filmmakers the opportunity to use their mobile device to block characters, props, and place lighting and cameras. Keyframing movement, the gyro camera and real-time manipulation make it easy to create dynamic 3D simulations of your shots. ShotPro is also available as a desktop app for OS X and Windows.

Movidiam is a great place to find crew and for professionals to find projects, but there’s also an app with tools for planning your project and keeping everyone organized. You can enter your project, add your team, create a list of tasks and assign the tasks to each team member. The app also has a calendar that your team can see and a place to send messages back and forth.

Yes, this is designed for filming, but it has a great selection of tools that can be useful before you shoot. It has a depth of field chart to help you select the right lens and a glossary so you can select the right lingo. In the Apple app, it also has a sun calculator to find the best shooting times for wherever you’re going.

Have  you ever thought that  your phone’s camera would be great if it had real camera control? That’s what FiLMiC Pro gives you. You can change frame rates, exposure, audio gain and more. It’ll even shoot in 4K if your device can handle it. It has zoom control with variable speed. There are two different sensor fields — one for exposure and one for focus — and each can be changed on the fly.

If you’re looking to go a little vintage 8mm has the answer. It includes a variety of different lens and film looks like Super 8, Flickering Frame, 20’s, 60’s and 70’s look. The developer’s web site boasts that the app was used in the Oscar winning film “Searching for Sugar Man” from director Malik Bendjelloul.

If you’re looking for that retro feel for your Android device, look no further than Vintage Retro Camera. It also features great film looks like 8mm and the +VHS adds that great time/date stamp like on your parents old VHS camera.

If you’re looking for a way to get a slow motion shot from your device, SloPro is a great solution. It features Super slow speeds of 500 or 1000 frames per second; The iPhone 6’s slow motion mode is only 240 fps. The app also features renderless editing and a variety different effects.

There are a lot of quick editing apps out there that will just give you the basics. Pinnacle Studio Pro is not one of them. This is the real-deal editor. It give you a real, frame accurate timeline that separates audio and video. You’ll also find a great titling tool and professional looking templates. Some templates, effects and a royalty-free music library require additional purchases.

In the Andrioid Play Store, KineMaster Pro has risen to the top of the serious editing apps. It features a multi-track timeline and great effects. One unique effect is their handwriting layer, that allows you to use your finger to draw or write on the moving video. While the app works on most devices running 4.1.2 (Jelly Bean MR2) or better, not all of the features can work on every device. Check the details before you buy.

Cyberlink PowerDirector Mobile provides a lot of flexibility in a free app for Android phones and tablets. The app offers timeline editing in a clean interface with over 50 transitions and effects, including slow motion effects and titling and overlay capabilities. Plus, once you’re happy with your edit, PowerDirector Mobile can share directly in-app to Facebook or YouTube.

If you need a simple editor that easily puts video and still images together, Adobe has created a great solution. One great feature is the ability to add your own music to the timeline, but best of all, if you use Adobe’s Creative Cloud, your work in Clip can all be sent to your Premiere editor. This can be one more tool in your Adobe arsenal if you are using this cloud-based solution.

After you’ve created and edited your work, you need to release it to the world. Vimeo is one of the better solutions. Vimeo boasts “gorgeous ad-free HD.” The app allows you to upload from your library directly to your Vimeo account.

The biggest name on the block, YouTube features a great place for your videos to be found but it is not ad-free. The app includes a basic editor with a few effects and music to fine tune your work before you upload.

Facebook has allowed users to upload video for some time, and it might be a great way to get the word out on your latest project. Facebook has also added live videos to their list of features. The feature is available in the app, so you can you can go live to your timeline right from your phone.

One way app creators make money is to offer in-app purchases. They will often give you an app for free, but it’s use may be limited unless you make additional purchases. In some cases, the in-app purchases are simply add-ons like effects or fonts. In other cases, you really can’t do much until you make the purchase. For example, you can try an editing program for free, but it won’t allow you to create a video longer than 15 seconds without a purchase.

Another revenue method is monthly subscriptions. Some apps will give you limited functionality but you have to subscribe to get the full use. Be cautious about signing up for services that charge monthly. Normally, they charge your account or add the cost onto your phone bill each month until you cancel — sometimes without any notification

We also found a couple of new and unique apps that will take your device to new heights, but these apps require an additional hardware purchase.

Imagine your crew using their smartphones as an intercom system. That is what Unity Intercom has created. You download the app onto your phone and plug in a headset (sold separately) or the earbuds that came with the phone.  Now everyone can be connected. The intercom will not use cell; it relies on a local wifi. The drawback is that the system requires Unity’s Server software for Mac, which starts at $499.

Debuting at NAB 2015, Manfrotto introduced their Digital Director that turns your iPad into a complete DSLR controller. Currently available for Canon and Nikon cameras, the app can control shutter speed, aperture and even focus with just a touch on the screen. There are also great monitoring features like audio and histogram. The system requires the purchase of an iPad cradle that includes a camera cable. The package starts at $499.

These represent just a few of the many, many apps on the market today aimed at unlocking the video production power of you iOS or Android device. While the apps featured here can be trusted to get the job done, new apps are released or updated every day. As you search for the perfect app to increase your phone’s functionality on set, always consider cost and reputation before hitting the download button.