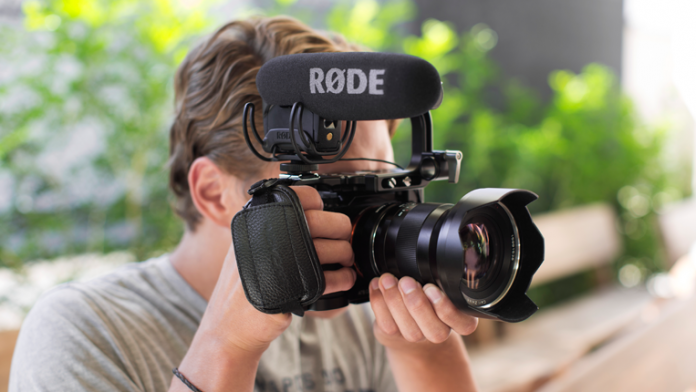 This buyer’s guide does the legwork and points you in the direction of the perfect mic for your next shoot.

Here’s an unpleasant, yet almost universal, truth: Your camera’s internal mic is awful. Let’s explore the issues that render a camera’s mic incapable of producing professional results.
The first problem comes from the camera usually being too far away from the source of the sound. Remember, sound travels relatively slowly and reflects off all the hard surfaces at your shooting location. These reflections reach the camera’s mic at slightly different times and cause an unpleasant cavernous effect. Moving the mic as close as possible to the source of the desired sound will minimize the effect of the reflections. An external mic is usually the best solution.

The second problem involves the camera mic’s penchant to capture noise. The mic is prone to pick up handling noise from the filmmaker as fingers move to adjust camera controls. In addition, since the mic is physically attached to the camera, the internal mic can pick up sounds from zoom and autofocus motors inside the camera. Not good.

A third challenge is noise from the filmmaker — like grunts and breathing sounds — these are readily captured by the nearby camera mic. An external mic solves each of these problems.
Here, we will provide information you need to select the perfect external mic for any shoot in your future. We’ll explore three different recording situations: studio, field and camera mounted.

Before we proceed, let’s take a moment to review polar patterns. No matter what you are recording, there is usually some sound you want to avoid capturing. The polar pattern of a mic denotes its ability to accept, or reject sounds, coming from different directions.

“Unidirectional,” mics capture sound from only one direction. These mics — commonly called “cardioid” — have a pickup pattern that loosely resembles the shape of a heart. “Supercardioid” mics do even better at rejecting sounds from the sides of the microphone. These extremely directional mics shine at capturing sound that is a significant distance away.
Other microphones have an “omnidirectional” polar pattern. This means they pick up sound from essentially all directions. “Bidirectional” mics pick up sound from two directions. This polar pattern also goes by the name of “figure-eight.”

Audio-Technica AT2020 USB (MSRP $229) This condenser mic is a great fit for the budget-minded filmmaker. The cardioid polar pattern does a great job of ignoring sounds from the sides. The mic has built-in analog-to-digital circuitry that results in a USB connection that’s compatible with both Mac and Windows computers. Another version of the mic is available with analog output through an XLR connector.

Finding the “business end” of this mic can be a little tricky. This is a “side address” mic meaning that a singer belts out vocals into the side — not the top — of this mic. Thankfully, the backside of the mic has a label.

RÃ¸de NTR ribbon (MSRP $1,000) Ribbon mics are an exotic breed — the most rare type of microphones. The extremely thin ribbon inside the mic must be treated with utmost care. To offer protection, the Rode NTR ribbon mic includes an internal shock mount that makes the use of traditional external shock mounts unnecessary. In addition, the NTR employs a handy “travel screw” feature that protects the ribbon when not in use.

The NTR is a side address mic with a bidirectional polar pattern. The mic requires 48 volts of phantom power that often comes from a mixer. Like any high quality mic, the NTR offers its analog output through an XLR connection.

Worried about broken ribbons sidelining the NTR? Rode’s 10-year warranty includes one free replacement ribbon within the warranty period. The exceptional quality of ribbon mics makes an occasional broken ribbon a small price to pay, especially when a replacement is free!

Blue Yeti Pro USB (about $250) Blue is a new breed of microphone company — they reimagined what a mic could look like, and how it’s named. Mic models include the Snowball, Nessie, Tiki, Kiwi and the Yeti Pro we’ll explore here. Like its siblings, Blue gave the Yeti Pro a playful, yet highly functional, form.

The Yeti Pro is a USB mic that offers 24-bit/192KHz digital recording, which is many times better than CD quality. A built-in headphone amplifier offers zero-latency monitoring with adjustable volume. Connect the Yeti to a Mac right out of the box, or download a driver for a Windows computer.

Inside the Yeti’s housing are three condenser microphones. This mic trio gives the Yeti a slick feature that allows the selection of cardioid, omnidirectional, bidirectional and stereo. Want to stay in the analog realm? No problem. The Yeti Pro offers an analog XLR output not found on the standard Yeti. 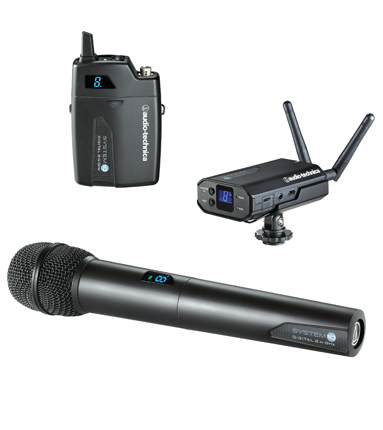 Audio-Technica ATW-1701/L wireless (MSRP $790) There are multiple configurations that mix and match different mics and receivers in Audio-Technica’s System 10 family of wireless microphones. The ATW-1701/L setup includes a lavalier mic and a portable receiving unit that mounts on a camera.

At 24-bit with a KHz sample rate, the system offers very high quality audio. Unlike some low-cost systems, this one is 100 percent digital and operates in the UHF (2.4GHz) frequency band as opposed to the less desirable VHF band.

The MT830cW omnidirectional lavalier mic attaches to a ATW-T1001 UniPak transmitter. Each of the available eight channels has two frequencies that switch seamlessly when detecting signal degradation. Bottom line: Audio-Technica’s ATW-1701/L offers many of the same features of units costing much more.

Shure SM58 (about $100) This mic is a living legend. First offered in 1966, today it is one of the most common vocal mics in existence. The Shure SM58 handheld cardioid mic has a reputation of being virtually indestructible.

Sennheiser MKE 2 Digital Wireless (about $500) This innovative product pairs the time-tested MKE 2 lavalier mic with an analog to digital converter by Apogee. The result is a newfangled breed of mics designed to connect directly to a newer iPhone or iPad.

Connection is easy through Apple’s lightning cable. The MKE 2 mic attaches to clothing — its diminutive size and black finish render it visually unobtrusive. Included is all the software you need. Add a selfie stick, and you have a highly portable setup ready to capture your latest video blog with professional quality audio. You can even use an Apple watch as a remote controller.

DPA d:facto II Vocal Mic (MSRP EUR 815, US about $890) Yes, mics can get expensive. At home on stage, or in the studio, the DPA d:facto II is an example of a high-end handheld vocal mic. The supercardioid mic does a great job of ignoring sounds entering from the sides, while focusing on sound directed into the top of the mic.

An internal three-stage pop protection grid removes unwanted sounds like the popping noise from the overemphasis of the ‘p’ sound. Like any wired mic, third-party wireless transmitters quickly convert the mic into the wireless variety. This mic is adept at capturing loud sounds without distortion.

Rode VideoMic Pro Compact Shotgun (about $250) This super cardioid shotgun mic is right at home atop a DSLR camera — indoors or outdoors. The power of this mic comes from its ability to capture sounds directly in front of the camera while ignoring sounds from other directions.

Accessible from the rear of the microphone are controls for power, audio level and high-pass filter adjustment. The high-pass filter helps prevent the capture of low frequency noise like air conditioners and traffic. A 9-volt battery supplies 70 hours of electricity to power the VideoMic Pro’s condenser transducer. Output is via a 3.5mm connector, the type essentially all DSLRs use to connect external mics.

Zoom H4n (about $200) The Zoom H4n recorder includes two matched condenser mics mounted in a crossing configuration called X/Y. The filmmaker can change the mics’ cardioid pickup pattern from 90 to 120 degrees to alter the width of the stereo image.

The H4n mounts to a mic stand clip, a standard tripod — or an optional HS-1 hot shoe adapter mounts it directly to your DSLR camera. A simple optional cable connects the H4n to your camera. Onboard USB connectivity allows the H4n to serve as a USB mic when connected to a Mac or Windows computer.

It gets better. More than just a mic, the Zoom H4n is also a high quality audio recorder that can capture four simultaneous tracks. Recording features include up to 24-bit/KHz quality; overdubbing and punch-in; and built-in tools like compression and limiting, low-cut filtering and reverb/delay. The H4n offers six hours of operation through two AA alkaline batteries.

There are three types of systems inside microphones that do the magic of converting sound energy into electrical energy — in the form of an audio signal. This process of changing one form of energy to another is called transduction and the device inside a microphone is a transducer.

One type of mic transducer is the one found in dynamic mics. It is sometimes referred to as a moving coil mic — a more descriptive name. Inside the mic, wire twisted into a coil moves within a stationary magnet as sound strikes the mic. The legendary Shure SM58 handheld mic is one example.

Another transducer type is the condenser mic. A condenser microphone can take the form of handheld, studio mic or the tiny lavalier attached to the clothing of a news anchor. They’re great at capturing quiet sounds or sounds at a distance.

A final mic transducer type is the ribbon. Ribbon mics shine at recording the human voice with warmth and clarity. Ribbon mics tend to be found in studios because they’re usually expensive and fragile. Their fragility comes from the thin metallic ribbon inside the mic that vibrates when sound reaches it. But, if the sound is too loud, the delicate ribbon may break.