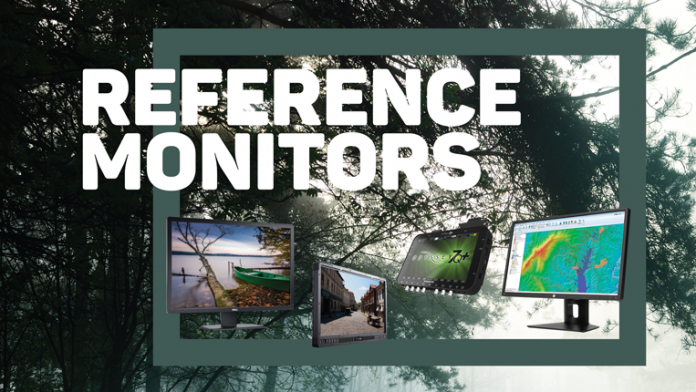 There are two main types of reference monitor, each used in video production in its own way. On set, field monitors give the crew a better way of seeing what is being shot compared to just looking in the camera’s viewfinder. In post-production, color-accurate monitors are key to editing and color grading. While there is some overlap in functionality, there are differences in features that make each better suited to its own type of work.

Field monitors help ensure great shots by providing information as they are being captured. Field monitors are best served by features including high resolution, contrast, color gamut, LUT implementation and brightness. Some even feature audio monitoring capabilities. Larger field monitors are used around set, often in a video village area, where producers, clients or others can see what is being recorded.

Field monitors help ensure great shots by providing information as they are being captured.


On-camera field monitors are frequently used by camera operators to ensure quality in their work. These field monitors are often smaller, lighter and battery powered. Most will feature  both scopes such as histogram, RGB parade and vectorscope, and image layovers such as focus assist, zebras and false color. Battery options and input/output connections should also be taken into account.

Convergent Design’s Odyssey 7Q+ ($2,295) is another combo 4K recorder/field monitor that offers a 7.7-inch OLED touchscreen display with 1280×800 resolution and 3400:1 contrast ratio with full color gamut former DCI-P3 or Rec.709 viewing. The monitor features a range of helpful scopes and layovers, plus 3G-SDI and HDMI inputs.  The 7Q+ can fit on-camera or finds a useful place in video village with Multi-Stream monitoring for multi-cam shoots. Again, the wide range of recording options add a lot of versatility.

Marshall Electronics offers the V-LCD70-AFHD ($800) as a 7-inch 1024×600 resolution on-camera monitor. It has a bevy of inputs including HDMI, DVI-I, SD-SDI, and HD-SDI. Layovers, scopes and audio metering give shooters the tools they want.  The display is 500 nit, 700:1 contrast ratio.

In editing, a reference monitor acts as a second display that lets the picture editor view a large version of the video with very precise color representation. Without a dedicated reference monitor, either the image is full screen and your tools, effects, and bins are hidden, or everything is squeezed onto the screen, resulting in the image being just a fraction of the screen size. Seeing a larger representation of the image can allow editors to see the fine details that affect how the video plays to its audience.

The other main reason to for an editing monitor is to ensure proper color space of your images. You should be editing and color grading on a system that uses the color space you will be delivering to your clients or one that can be modified to do so with LUTs. HDTV is based in the Rec.709 standard, whereas consumer computer monitors use sRGB color space. A video that was color graded in sRGB will not look the way it is expected to when played on a Rec.709 system.

The Z27s 27-inch Widescreen IPS Monitor ($700) by HP has 3840×2160 resolution and support for a wide color gamut suitable for the Rec.709 color space. HDMI, DisplayPort and Mini DisplayPort connectors give a range of inputs. It offers 300 nit brightness and 1000:1 contrast ratio for a rich black color.

No matter what tools one is looking for for as a video specialist, the ultimate decision is based around production needs versus budget. Finding the right monitors means balancing features against cost. Work style, client needs, and the type of video you shoot are all factors in finding the right reference monitors for you.

Scopes are some of the most powerful tools for ensuring a great image quality in your video. They function by reading and displaying signal voltage in a useable format.

A waveform monitor is a specialized scope used frequently to get a precise reading of the luminance, or brightness of an image. Waveform monitors display an actual left-to-right representation of the image, but instead of seeing the picture, you get a signal charting IRE brightness measurements. This helps make sure the shot is properly exposed and lets the user easily find under or overexposed portions of the frame.

Vectorscopes, which measure the chrominance (color information), are often used in conjunction with waveform monitors. Vectorscopes display the saturation and hue of the image signal. They are displayed as a circular chart where hue is represented by the angles of the circle, like sections of a pie, and the saturation is measured by how deep the signal goes into each of the hue sections.

RGB Parade is another type of scope. It is used to visualize information about the three color channels: Red, Green, and Blue. Parade means seeing all three colors together, side by side, but you can often monitor a single color channel with it’s own dedicated scope. These operate as a vertical scale measuring the intensity of each color channel in a left-right representation of the image.

Scopes give readings with a precision that can’t be matched. Instead of just thinking something looks right, they allow a quantifiable measurement of the image signal that can ensure a top-quality product. Understand how to read them and when to use them is a key to professional level video production.

Erik Fritts is an award winning writer, photographer and filmmaker.  He has a degree in Film Production from CSU Sacramento and has worked in tv, film, and corporate video