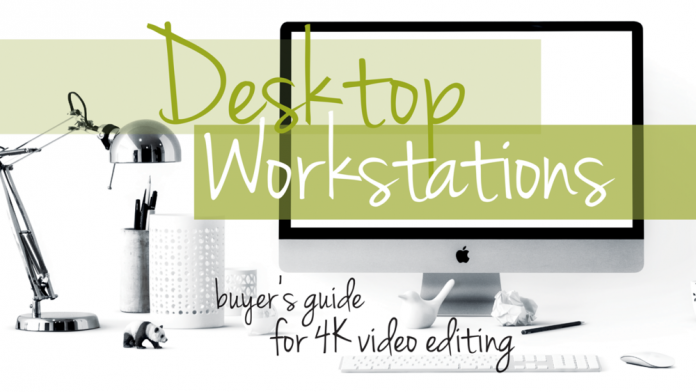 Computers may have changed the way video is edited, but few spend time considering what components are being used inside their wonderful machines or whether different configurations would make for a better, more efficient workflow. With 4K video fast becoming a standard, a desktop workstation must meet certain requirements in order to be able to edit video without difficulties. The components making up the workstation must be attuned to the type of video being edited and to the software being used. This will enable you to edit in an efficient and creative manner that not only gets the work done, but gets it done on time and in a way that meets your creative needs. Let’s separate out each of these computer components to best understand what is needed.

The central processing unit (CPU) can basically be thought of as the computer’s brain, one that does nothing but process numbers. Since numbers are what programs are made of, that’s pretty important. The speed at which a CPU crunches those numbers translates into how programs are executed and how the computer performs overall. To get a picture of how well a particular CPU behaves, one can look for how fast it is, which is dictated by its clock speed, usually expressed in gigahertz (GHz), as well as how many cores it has, its instruction set, memory bandwidth, cache and other factors.

To get a picture of how well a particular CPU behaves, one can look for how fast it is, which is dictated by its clock speed, usually expressed in gigahertz (GHz), as well as how many cores it has, its instruction set, memory bandwidth, cache and other factors.


One of the roadblocks that a CPU once had is the fact that it had to handle everything that the computer was being asked to do, and that especially was problematic when it came to processing graphic-intensive tasks. This led to the development of the GPU chip (Graphics Processing Unit), which is meant to take some of the weight off of the CPU by devoting itself to handling graphic processing tasks.

While a CPU can perform similar functions as that of the GPU, the fact that the GPU is specialized means that it can perform its functions faster and better. It also helps that, unlike a CPU, the GPU isn’t composed of just a few cores handling a few software threads at a time; GPUs are able to process thousands of threads all at the same time due to being composed of hundreds of cores. Working in tandem with the CPU, GPU-accelerated computing provides for increased overall performance and is supported by the latest operating systems.

While similar in appearance, RAM and VRAM perform different functions. RAM (Random Access Memory) can be found in slots on the computer’s motherboard, most often accessible and replaceable– except in cases where it is soldered on. Its purpose is to load in the operating system as well as to load programs into its memory in order to run them. Higher amounts of RAM will enable a computer to run faster than one with less memory since more data can be accessed without having to load it in from your hard drive or other storage device. As a result of faster and more intensive operating systems, the typical computer will have a minimum of 4 or 8GB of RAM, though meeting the demands of certain intensive programs often requires adding to that number.

VRAM, or Video RAM, focuses on storing graphic data and so works with the GPU. The amount of VRAM dictates how many 2D and 3D images can be displayed at a time, with the complexity of the images and frame rate also being a factor. When VRAM reaches its limit, it offloads to system RAM, which negatively impacts performance. It is for this reason that a video card will often have 4GB or more dedicated only to VRAM.

Before getting to CUDA and OpenCL, we must address GPGPU, or general purpose computing on graphics processing units. This allows the GPU, which typically handles a computer’s graphics needs, to aid the CPU in processing data. Without GPGPU, data would go from the CPU to the GPU, but the GPU could not transfer any data back to the CPU. GPGPU allows for data to be transferred bidirectionally between the CPU and the GPU. This improves the efficiency of the computer’s functionality as related to images and video.

OpenCL (Open Computing Language) is a framework for writing programs which executes across heterogeneous platforms consisting of CPUs, GPUs and other processors or hardware accelerators. It is maintained by a non-profit consortium that includes Intel, AMD, NVIDIA, Apple and others among its members. An example of a software program that supports OpenCL is Final Cut Pro X on a Mac.

Unlike OpenCL, CUDA is a proprietary parallel computing platform and programming model created by NVIDIA to make using a GPU for general purpose computing simple and efficient. An example of a software program that supports CUDA is Adobe Photoshop CC.

Both CUDA and OpenCL work to allow GPGPU to accelerate processing in an application, as long as the application supports at least one of these two platforms, working to take advantage of hardware that supports the relevant GPGPU framework.

Storage options come in two basic configurations: hard disk drives (HDDs), which use a physical spinning disc that has data written to and read from it, and solid state drives (SSDs), which use memory chips to contain the data. An HDD operates at one of two speeds, 5200 revolutions per minute or 7200 revolutions per minute. This speed determines the quickness at which the drive can read and write data.

Having no moving parts, it’s obvious that the life-cycle of a solid state drive will be longer than that of a spinning disk drive, but at this time, solid state drives are much more expensive to purchase than hard disk drives, especially when reaching terabytes of storage capacity. For this reason, hard drives continue to be the drive of choice for containing content for video editing, while solid state drives are popular as boot drives.

There are a number of connectivity systems in play today. The most common ones are USB 2.0 — now the oldest and slowest at 480Mbps — USB 3.0.0  at 5Gbps, Thunderbolt 2 at 20Gbps and Thunderbolt 3 USB Type-C, the newer standard now catching hold capable of transferring data at up to 40 Gbps. As can be seen, there are significant differences in the speed as to how each of these transfer data, which affects the ability of the user to work in an efficient manner.

One of the reasons PC computer sales overshadow those of Macintosh computers is due to the expandability of the chassis. Any PC can be upgraded and expanded — for example the video card it came with can be replaced with a faster or more graphic-intensive model, the amount of memory increased, or the number and types of hard drives added internally. In addition, core technologies like the CPU can be upgraded or replaced entirely. It is possible to construct a PC wholly oneself; this allows for making a customized model that fits one’s needs more specifically than could be possible by buying an off-the-shelf model. This is not true with most Apple computers.

The Final Component Is You

A desktop workstation can enable the video editor to attain their vision without restrictions or time-wasting stoppages. That said, it’s up to the person staring at the monitor to make sure that the workstation being used is the best one possible for their needs.

Now that you know what you’re looking for a why, here are some suggested models to consider.

SIDEBAR: What To Purchase Within Your Machine and What To Upgrade Later

The abilities of a desktop workstation should exceed the type of work that it is being called upon to do. If the type of video that will be worked on will be Full HD (1080p) but no greater, then having hardware with 4K video capability is not required. Continuing with the 1080p example, hard drive space does not need to be as intense, nor does there need to be as much RAM memory (nor the speed at which the video can be processed as fast). This can then be addressed at a later time, should the type of video being worked with changes, by going to a faster CPU, a more graphic intensive video card (both of which can be installed by the user in most cases or through an authorized dealer). Unfortunately this is less true for Mac users, in the case of iMacs, but does exist for the older Mac Pro towers as well as the more recent

PC users don’t have any restrictions in this matter, since it is possible to custom build a desktop workstation from scratch.

Marshal M. Rosenthal is a technology and consumer electronics freelance writer based on the West Coast