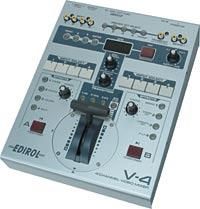 There once was a time when the low-budget professional videographer had a number of stand-alone video mixers from which to choose. Now, however, the computer editing world seems to have captured the attention of manufacturers, mainly due to the lower cost and superior finished product that nonlinear editing offers. There’s still a need for good stand-alone video mixers, however, so we were delighted to hear that Edirol has stayed in the game with the V-4. While the V-4 is a solid four-input video switcher, it really wants to strut its stuff on the dance floor. As a special effects generator and beat-matched switcher for live video performance, it really doesn’t have an equal at this price.

The V-4 is compact and well designed. Although a first look at its ample controls, inputs and outputs might be a little intimidating, a few minutes toying with the unit and looking in the manual show that its operations are easy to understand and logically laid out.

There are four video inputs split between two channels, that are clearly labeled A and B. They divide the bulk of the unit’s controls neatly in half, with the unit’s T-bar controller placed directly between them. While this is only a two-channel TBC (time base corrector) mixer, with a single button press to assign an input to a channel, you can quite easily switch between four sources. The TBC is not a frivolous feature and insures that the video switching is synced, smooth and without glitches. Unfortunately, there are only two S-video inputs; the other two inputs are RCA composite. Each channel also has four effects buttons: Channel A has Strobe, Negative, Colorize, and Multi, while Channel B gets Mirror, Chroma-key, Luminance Key, and PinP (Picture in Picture).

Rounding out the V-4’s features is a Memory dial, to which you can assign seven sets of pre-configured effects (the eighth is reserved for factory presets). The unit has over 200 possible effects; the Memory dial will really help you configure a useful subset of effects for a particular performance.

Outputs include a primary S-video port and a pair of composite outputs, for a total of three-mirrored video outs. The V-4’s Preview monitor output is only necessary to view when configuring the unit’s memory pre-sets. In operation, once configured, it is possible to operate the V-4 without ever looking at the Preview monitor. The quality of the video effects (including the two keys) and the primary S-video output is very high.

Those who have used traditional live video mixers before will notice a few odd things about the V-4 right away. One is the lack of any audio inputs or outputs. Many popular low-cost video mixers of the past (such as the Videonics MXPRO) have included audio mixing capabilities along with the video effects.

If you haven’t been out clubbing recently (that’s what the kids call "going dancing" these days), you may be surprised to find a Video Jockey (VJ) mixing live video to the beat and feel of the music being spun by the DJ. These visuals are a prominent part of the club experience and some bands, large and small, incorporate video into their live performances. This is what the V-4 lives to do. The prominent BPM (beats per minute) display along the top of the unit, with the Tap button alongside let you time effects and transitions to the beat of the music.

You can also trigger the V-4’s effects remotely via MIDI or Roland’s proprietary V-Link protocol, which means that a musical keyboard (synthesizer), sequencer or computer (such as Edirol’s DV-7PR) can control the video effects. This gives performers using electronic instruments great flexibility in controlling live visuals on stage.

How well does it operate as a live switcher, for television-style broadcast work or live-to-tape shooting of events? For this type of work, the V-4 is adequate, but some of its VJ-centric features might be hard to get used to. The fader, for example, will fade to white or black, operated manually by a small dial. This is actually a good feature in live performance, since if one video sources goes haywire (most commonly a computer), the operator can panic black the screen instantly. This is not how a traditional video mixer works.

The BPM Sync button acts as a sort of "Take" control, which performs a live switching effect without manually using the T-bar. Once you push the button, however, the unit continually switches back and forth between A and B in time to the music until you push the button again. This doesn’t mean you can’t use the V-4 in more traditional video-switching situations, it just means you may end up using the manual T-bar controller for all fades. While the T-bar is fun to use for a while, it is much more convenient to just punch a switch in practice, which is how traditional mixers work.

The V-4 is ready for nightclub duty, sitting alongside a large bank of audio equipment, easily triggered by people who are busy playing music or spinning records. In this role, it’s bound to be very successful. It’s not uncommon to see an old MXPRO or even an MX-1 sitting alongside the mixing board at a nightclub or live music event. The V-4 has features that will make those old mixers obsolete in this role. As a tool for modern visuals and video performance artists, we couldn’t be more enthusiastic about the V-4.