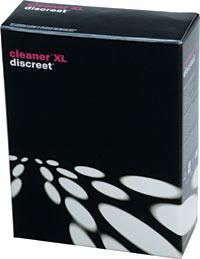 The modern multimedia production house often needs to produce video for multiple sources: broadcast, DVD and the Web. Collecting the proper tools to do this is not hard or expensive, but the process is tedious and can be rather technical. Fortunately, there are apps that will do it all without complaint or complication. If your clients need their video on the Web and on DVD, or your company has an archive library of video that needs to be updated to 21st century formats, you need a product like cleaner XL.

The cleaner XL installation process was mostly smooth, except that we had to exit our first attempt to manually install the RealOne player, which was a required (but included) component. No dongle was required.


The look of the app is completely different from the last version. The layout does not suggest a clear workflow at first glance, but it was not hard to get started. For example, although the program presents an obvious area for adding source files to be encoded, there is no Add or Import button anywhere. We eventually found the Add Source Media option on the Job menu. And a right-click in the Sources list window displayed exactly what we were looking for: a context menu with Add Source Media (the Ctrl+Alt+A keyboard shortcut will work too). This is typical of the entire application. At each step, we found cleaner XL to lack basic buttons, but once we learned what the program wanted (and trained our brains to right-click often), it wasn’t hard to use.

The next step was to select our Output Profiles. Again, a right-click context menu did the trick and we very quickly had a batch list consisting of DVD MPEG-2, Windows Media (WMV), QuickTime (QT) and full-screen MPEG-4 video ready to go. Conveniently, we could point cleaner XL to a Watch folder, so that anytime we rendered out a new DV movie from our editing application, cleaner would automatically start encoding it.


We then right-clicked in the Destination window and edited our destination list, which could have included uploading finished WMV and QT files to our Web site. There wasn’t any way to send MPEG-2 encoded video to a "D:DVD" folder and also FTP streaming WMV video to the Web, but perhaps that is asking too much.


Speed-wise, cleaner XL is much faster than the old cleaner, but is about the same as other modern encoding apps we’ve tried. We’d be willing to wait overnight for a good encode. With cleaner’s batch processing, waiting overnight isn’t a problem. cleaner XL for Windows uses the ubiquitous Main Concept MPEG-2 encoder, which is definitely not a liability. The Outputs window displayed the progress of the encoding with a detailed log. Of course encoding could occur as a background task on any machine, but newer Intel P4 processors with HT or multi-processor machines are your best bet.


We did encounter some strange screen redraw problems when we opened a saved project. As each video file was loaded into the application, the screen went black, momentarily flashing when the next file started. We determined that this was an overlay problem associated with an interaction with our nVIDIA video hardware, but in the end it did not cause any real problems.

cleaner XL has some extra filters that you may use to improve your video, including basic image adjustment tools such as cropping, color balance and brightness/contrast. When you edit and produce your own material, these tools will probably not be necessary, but companies that are moving large quantities of archival material to the Web will find them to be huge timesavers. We did notice that cleaner XL will no longer deal with still image formats, which is too bad, since we’ve used cleaner 5 to batch-prepare digital photos for video production in the past.


The most useful filter was the Adaptive Noise Reduction filter that removed video noise to improve compression using high efficiency Web codecs. The filter made an immediate and distinct difference in both the quality and the ultimate size of our output files, especially on less-than-perfectly lit, slightly grainy video. It isn’t magic and the filter added time to our render, but it was definitely worth it.

cleaner XL is not as easy to use as Canopus ProCoder, but both applications are essentially uncomplicated. For basic batch processing, the two apps compare very favorably. cleaner XL has a number of extras that may be important to you, such as automatically uploading video to your Web site via FTP. There is no quality difference between the output of the two applications for WMV or QT Web video, since they both access the same Microsoft and Apple codecs. MPEG-2 encoding quality with cleaner is identical to the many applications that use the Main Concept encoder (e.g. Vegas, MSP7, Premiere), but the excellent Adaptive Noise Reduction filter might make a difference if you have a lot of dark and grainy video. Like ProCoder or Sorenson Squeeze, the real strength of cleaner is its excellent batch processing. If you spend precious hours of your valuable creative time in front of a computer, mindlessly and manually compressing dozens of video files, do yourself a favor: hire an intern or get cleaner XL.