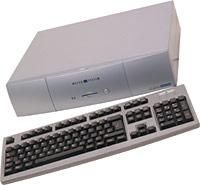 A few years back, the editors of Videomaker heard rumors of a standalone editor that used a hard drive, yet didn’t require a computer to operate. Before we knew it, an entirely new category of video editor was born.

Since then, the Casablanca has gone through a number of changes. MacroSystem US has been responsive to feedback from users, offering a wide range of third-party software upgrades, including 3D animations, graphics, photography, titles and other enhancements to the existing system.

Casablanca to the Core

The first thing we noticed when we first turned on the Avio DVD was a slightly updated, improved interface. A new font graced the screen. Also, the design lines were a lot cleaner. Even so, just a few minutes of editing reminded us that this was the same familiar Casablanca interface. In short, it looks a little better, but the mechanics of the interface are essentially unchanged, which is a good thing for those of you who have used Cassies before.

Out of the box, the Avio DVD required very little in the way of installation. The only thing that might throw our US readers off a bit is the audio and video RCA-plug adapter that must be connected to the European SCART adapter. This, and the occasional error message in German, reveals the Avio’s origins on the other side of the Atlantic. While attempting to begin testing, we couldn’t get a video signal into the Avio, until it was discovered that this little SCART adapter has an "input/output" switch that you have to flip. Our unit worked just fine via the RCA video connection, but the S-video connection only worked out of the lower SCART connection.

To test the Avio DVD, we cabled a Sony Digital8 camcorder to the unit’s FireWire port and selected an hour-long vacation tape to edit down to a watchable length of eight minutes or so. After a quick check of the video and audio settings, we were ready to capture and edit some video.

Capture was uneventful. The inability to create and save batch capture lists was perhaps the biggest feature we missed in our tests. After capture was complete, we clicked the Auto button to split the single large clip into sub-clips based on time/date stamp scene detection. The process was the fastest scene detection we’ve ever seen.

We didn’t notice anything remarkably different about editing with this version of the Avio. The options on any particular screen are clear and simple. Even for novices, the limited number of buttons makes for a friendly and unintimidating experience. We like the single-screen interface and found editing to be a fast process. Editors who are used to a timeline environment might feel out of place in the main storyboard interface, but it is very easy to use.

The machine was very stable, but we did manage to crash it twice during our fairly rigorous tests. However, no editing decisions or footage were lost. They were crashes nonetheless and required a re-boot from scratch.

DVD Arabesk is the Avio’s DVD authoring software. On the main screen of Arabesk, the Add Project button allows you to (you guessed it) select and add an available project to a DVD. Arabesk immediately begins encoding your video into MPEG-2 video. At the Normal setting, MPEG encoding happens in real time (about 28fps). The High quality setting (which we recommend) is a bit slower, but still quite fast, rendering roughly 22fps. You can capture MPEG-2 video, which will allow you to capture more hours of video to disc, but this video will still need to be rendered before it is ready for your DVD.

If you have multiple projects stored on the hard disk, you can add them as separate menu items on the DVD interface. A button labeled Chapters allows you to easily set chapter markers and another button gives control over image quality, allowing you to fit more video onto the disk at the expense of video quality. Some simple menu-creation capabilities are built into the Arabesk interface. It’s also possible to import still images or photos to use in your menus. Overall, DVD Arabesk is everything you would expect a Casablanca DVD-maker to be: reliable and easy to learn, yet a little strange and somewhat limited when compared with the flexibility of Mac or Wintel software.

Our burned disc played normally without a hitch in every home DVD player we tried. The quality of the encoding was good. Not excellent, but good, with only minimal artifacting visible when the image quality was set to Maximum.

If you’re comfortable with configuring a computer, you might get more bang for your buck on a PC-based system. Start to finish, there is no question that you will be immediately productive with an Avio.

A DVD-maker worthy of the Casablanca name.