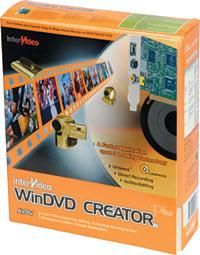 InterVideo is a company name you may not recognize, but you’ve probably seen and used their products. Many new computers with DVD drives come with InterVideo’s WinDVD player software, so the company is up on DVD technology. It isn’t surprising to find that InterVideo is also in the authoring arena with a sub-$100 app called WinDVD Creator Platinum 2.

WinDVD Creator 2 is a fairly standard capture, edit, author and burn application. It requires Windows 2000 or XP, which an older PC might not already have nor be ready for. We installed the app on two different XP machines.

The basic interface isn’t glamorous, but it gets the job done without any confusion. One example is the unassuming menu bar at the top: basic and boring, sure, but we know how to use it. The workflow is directed by a left to right progression across the top of the program: Capture > Edit > Author > Make Movie. This is a workflow concept that we first saw in Ulead’s VideoStudio and is something beginners will appreciate. In fact, the longer we worked with WinDVD Creator 2, the more we were reminded of the Ulead app.

The capture interface was also clean and simple, responsive and trouble-free. We could capture in a few different formats, most importantly in DV or DVD-ready MPEG-2. WinDVD Creator 2 had integrated CD audio track ripping, which was very convenient. After capturing our clips, we could run scene detection to break up larger clips, based on time or visual changes in the file. The process was fast and very easily adjustable.

Because of poor implementation and the technical difficulties involved with editing compressed MPEG-2 video, we generally recommend against doing so. Most applications do not handle MPEG-2 files well, becoming finicky and even crashy, especially when dealing with larger files. WinDVD Creator 2 is surprisingly lithe and handled MPEG-2 video amazingly well. Granted, this was on a fast P4 3.06GHz machine, but the program was still much better at MPEG editing than most anything else we’ve used.

The basic editing interface is a storyboard/timeline hybrid that you can toggle. It is well done, but there is also nothing remarkable about it, either. WinDVD Creator 2 does a nice job with rendering only what needs to be rendered, but most of the competition does this as well. The weakest feature of the editing is the titler, which only has the most primitive of options.

Disc authoring is executed competently and the process is easy enough, but the included templates are not very attractive. Fortunately, it is easy to substitute your own backgrounds, including full-motion video and background music. Motivated users can manually create their own buttons in Photoshop, but we’re guessing most people won’t bother. In the end, the menus have a Play button and a Scene Selection option, which is about as complicated as most DVDs ever need to get.

InterVideo does break from the sub-$100 DVD authoring pack in one significant way: they use their own MPEG-2 encoder. Since encoding is UniPass (and not 2-pass VBR that we typically use in our standard MPEG render), the codec is very fast, compressing about 45fps on our P4 3.06GHz machine, which about 150% faster than real time. Quite frankly, we were skeptical of single-pass encoding going into the test, but were impressed with the quality coming out. If you feel that you need fine control of the bitrate or GOP structure, a consumer app like this is not for you, but if you just want fast, no-nonsense encoding, WinDVD Creator 2 really delivers the goods.

For audio, InterVideo includes options for MPEG, PCM and 2-channel Dolby. We’d recommend you always use the Dolby option (you certainly paid for it in the price of the product). DivX editing is also supported, but the encoder is not included. This is definitely a nice geek-feature, but unless you know what DivX is, what it is for, where to get it, how to install it and own a rather beefy PC (roughly 2GHz or better), you probably won’t use it much.

We’ve wrestled with Direct to Disc features in other apps. The promise always seems simple, but it never is. Sometimes the program captures to the hard disk first and then burns to DVD. This is easy, yes, but not exactly what we expected. WinDVD Creator 2 does capture and burn straight to DVD, provided your computer is fast enough. We tested on an HP 3.06GHz machine recording to a 300n DVD+RW drive. We had little success burning straight to DVD+RW discs: if anything was going to crash WinDVD, this process was it. DVD+R discs worked very well, however. If you have finished content that just needs to go to disc from your camcorder, this is a very nice feature. You can stop recording and add programs to the end of the disc later and then finalize it to work in your living room DVD players.

WinDVD Creator 2 doesn’t break much new ground, to be sure, but it is a decent app, all the same. We found it to be uncomplicated to use and backed by solid technology. The 110-page printed manual with lots of pictures is well done, but the Help doesn’t cover any more than the manual, so we were left with questions. (For example, should we have even tried to use DVD+RW discs for direct recording?) In the end, our analysis is that the program works as advertised, and it works well.

WinDVD Creator 2 is a solid competitor in the sub-$100 capture-edit-author-burn category.