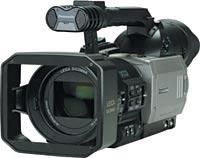 Is "consumer" a Dirty Word?

I am a long time reader, though I canceled my subscription because of your constant inaccuracies like the following.


In the article "Is 24P for me?" by D. Eric Daniels [sic], he cites the new Panasonic camera as being a "Consumer" camera. Now this is just plain old wrong, and he’s obviously not doing his homework before writing. Panasonic advertises the AG-DVX100 on their Pro Camera page. In no reference to the 24P camera have I ever heard the word consumer. The GL1 or GL2 is a prosumer camera, in that it can be used for home use, or pro use if you are on a budget. This is gray area. There is no gray area in regards to the AG-DVX100. They are continually being used by broadcast networks, along with independent filmmakers, and are not considered to be consumer items.


I don’t know about you, but I’ve never seen a "consumer" camera with XLR inputs supplied with phantom power… I will now do my reading with a magazine that actually knows the difference between pro and consumer equipment, and bothers to check their facts before printing. For shame Videomaker, you used to be the best. You are now a "consumer" item.

Our apologies, Greg: the AG-DVX100 does indeed come from Panasonic’s Broadcast and Professional Video division, not their consumer division. That was a mistake, and we apologize for it. Let us be quick to point out, however, that we think the AG-DVX100 offers its package of pro features at a price similar to camcorders issued by consumer divisions, and by companies that have no such divisions. We think this is something to celebrate, which is why we gave the camera one of our Best Products of the Year awards.

We Didn’t Do Magic

I appreciate Videomaker ‘s article titled The Magic Boxes (October 2003), which reviewed the top editing appliances on the market today.


However, I was surprised with the title "Magic Boxes" that Applied Magic’s ScreenPlay was not even mentioned. The article stated that appliances are easy to use. The ScreenPlay has an award-winning interface, which is the only appliance with a drag-and-drop storyboard.


The price comparison was misleading as well. ScreenPlay Wedding Edition was listed in the article for $4,695, but that price includes much more than the other products. This special edition includes a DVD recorder, jog shuttle, Digital Juice Motion backs, Pan and Zoom, A/B Roll effect (for 2-camera editing) and many more extras the other companies do not even have available or include in their price.


In summary, the article did a fine job explaining the advantages of editing with an appliance. Applied Magic has appliance tools for editing, recording and duplicating which is usually faster, easier and more reliable than a PC.

Kudos to the staff. The instructional articles published in the September 2003 issue of Videomaker are great: Basic sound recording tips, DV advantages, how to composite, improving lighting, etc. Great stuff. I can’t wait to experiment with compositing (beyond text, that is). I’ve been a video enthusiast for nearly two years, and I could have really used this information when I first started; what took you so long?


I plan to upgrade my NLE workstation in 6-12 months, and after your review, I’m even more inclined to upgrade my copy of Ulead MediaStudio 6.5 Directors Cut to MediaStudio Pro 7. Thanks for telling me what I wanted to hear.


Keep up the good work!

from the Videomaker Forums