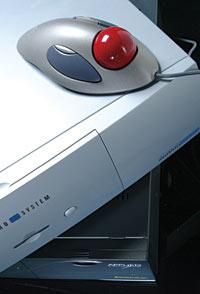 Dedicated editing machines are essential for serious post production, but do you need a computer reserved solely for editing or do you need an appliance: a standalone box that doesn’t need a computer system? As you might expect, it depends on your personal needs. To help you decide, let’s compare appliances to computers and then survey some of your options. The virtues of an editing appliance (which we’ll now shorten to "appliance") are simplicity, compatibility, stability and reliability.

Appliances are simple to set up and operate. Remove from box, plug in, connect to standard TV, edit. Though most appliances will output to VGA monitors for better resolution and easier viewing, a TV set will work fine with the simpler operating systems (like the Casablanca Smart Edit operating system). You’ll also need to connect to a source (like a camcorder) and plug in an archive medium (camcorder, VHS recorder, or DVD burner) for recording your finished show.


The next simplicity is in the graphical user interface. All editing programs use them, but appliance vendors have put extra effort into making them clear, simple, and intuitive. Casablanca products use a storyboard editing metaphor: with shots represented as slides, which you move around to create a shot order. The Edirol interface uses a timeline metaphor, which shows the length of each shot as well as its place in the show. Professional software editors require far more complex (and confusing) screens to display their immense number of tools and work options. Fire up an appliance and you’ll easily recognize its tools and features.


Finally, appliances are simpler to use because their makers have taken their best guess as to what features you really need, most of the time, on projects up to a certain complexity and then omitted bells and whistles that you might use infrequently, rarely or never. It’s a trade-off: if you never use something, you don’t need to worry about it. But on that one occasion when you really, really need a feature – you’re outta luck.

In an appliance, everything works perfectly with everything else because the box was designed and built that way. Remember: an appliance is as much a computer as your faithful Apple or Gateway, with a motherboard, chipset, RAM, hard drive and cards.


But unlike a general purpose computer, an appliance has 100% compatible hardware, software, interrupts, drivers – all locked up tight. The good news is that you never have to worry about the conflicts that bedevil PC users. Everything recognizes, loves, and works perfectly with everything else all the time without exception. The bad news is that you can’t upgrade your audio or video capabilities or swap in a faster CPU or add your box to a network or make any other changes.


You can, however, add those software packages and plug-ins designed and sold by the appliance maker. MacroSystem US, for example, offers over 30 different add-ons. You can also add hardware accessories like a VGA monitor, an edit controller or a larger hard drive. Some units also have swappable hard drives so that you can keep different projects on different drives and plug them in as needed.

Editing appliances do not use Windows or Apple operating systems because when a computer need do only a few things, you can start with an operating system that does those things better. XP and OS X are amazingly versatile operating systems, but they are large, fearsomely complex, hampered by bugs and clunky code and subject to The Blue Screen of Death. With an appliance, you may go indefinitely without a crash or system lockup.


Edirol uses the Be operating system, usually written as BeOS. This system was specifically designed to handle broad-band data transfer at the speeds demanded by high-quality video. It can work in native DV format without breaking a sweat and render most (though not all) titles, transitions, effects and image adjustments in real time. Instead of judging a cruder work print version of an effect or waiting while the computer renders it at high quality, you can see the final quality as you work, without delay.


The compatibility mentioned previously is another big contributor to system stability. With everything ordered to play nicely together and then locked in that way, the potential for system crashes plummets.

Simplicity, compatibility and stability all contribute to system reliability. In addition, most appliances are built mil-spec (like tanks, if you will). That’s because they’re designed for hard, continuous use.


A Casablanca Avio in a video production classroom may run six periods a day, five days a week, nine months of the year. Throughout this brutal duty cycle it will be operated by students, most of whom hold little reverence for school equipment, and a few of whom can be actively malicious. In professional applications, A Casablanca Kron or an Edirol DV-7 may be running every day, all year long, sometimes in field conditions.

When Not to Choose an Appliance

No tool is right for every job and appliances are no exception. Their drawbacks are mirror images of their advantages. Because they are closed systems, you cannot customize the hardware. So if you want to upgrade as the technology improves, you have to swap the whole machine.


Nor can you pick your software. The marketplace is crammed with audio and video plug-ins, graphics and animation packages, font libraries, and other applications to enhance and customize your editing capabilities. With an appliance, however, if the vendor doesn’t sell it, you don’t get it, period.


That’s partly because appliances trade versatility for simplicity. If you’re a nut about sophisticated sound tracks (as I am) you’ll find that Casablanca’s six stereo tracks cramp your style a bit and Edirol’s three are extremely limiting. The same is true of transition effects, titling fonts and enhancements, and image manipulation tools.


Also, the storyboard metaphor is clumsy because you can’t work with shot order, length, and in/out points simultaneously.


But don’t forget: that storyboard metaphor is so simple that a fourth grader can quickly figure it out and an occasional hobbyist can remember it from the last editing session weeks or months ago.

Which Appliance for You?

You can get a Casablanca Avio and a 13-inch TV for the price of a modest PC (and it’ll work much better than a basic computer-plus-software combo). Or, if you choose the Edirol DV7 with dedicated editing controller, bi-amplified studio monitors, VGA monitor, extra 120 gig hard drive, keyboard, and mouse, you can dedicate serious bucks. (The top-line Casablanca Kron, similarly accessorized, will be in the same dollar ballpark.)


After the financial decision, you have two more decisions. First, are you okay with the storyboard editing metaphor or do you need a timeline? From that point on, your choices are all features. How many audio tracks do you need? Do you want a professional-style external editor with audio pots, a jog/shuttle wheel and a T-Bar fader? How many plug-in packages would you like to choose from?


Also, what kind of support do you need and how much? Casablanca, for example, offers a complete package for classroom teachers, with a sample curriculum, teacher’s guide elements, student handouts, quizzes, and so-forth.


Last but not least, how long will it meet your needs? How long will this closed box with its limited, proprietary add-ons, continue to do everything you ask of it? If you’re a teacher, your amazing black box can work its magic for many, many years (and, with your budget, it’ll have to). Now you may not be an instructor in a junior high classroom or a full-time editor in a production house. Nevertheless, you too can expect a longer life with fewer failures than you’d likely get from a general purpose computer.


[Sidebar: Why not use the computer you have?]
You’re already running a 2.7 gigahertz screamer with a gig of RAM and a 7,200 rpm, 120 gig hard drive. That’s more than enough muscle for editing, so why not just use your own computer?


The short answer is, if you’re cutting a few home movies with the simple editor included with the operating system or a $99 editing package, go right ahead. The simplicity of your software and the small amount of raw footage and finished movie will probably let you assemble nice shows without a single hiccup from your computer. Usually.


But the minute you move up to the next level of post-production, big-time woe unto you, because you risk dire complications with cards, applications, drivers, interrupts – just about everything that makes your system a general purpose workhorse. The hard fact is that for sophisticated, dependable post production, you’ll need a dedicated machine, whether you choose a computer setup or a standalone appliance.