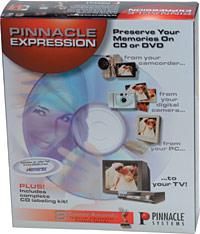 The sub-$50 DVD authoring category is a crowded one. The promise is the same for all of them: simple capture, basic editing, attractive templates, click and burn. We’ve been waiting to review Pinnacle Expression for some time. Our review of Pinnacle Express (the predecessor to Expression) was mixed: the program was well-designed and easy to use, but seemed to have a number of problematic first-generation bugs. If Pinnacle killed all of the bugs from that app, we’ll give it a good review here.

Let’s get the bad news out of the way first. We first installed Expression (version 2.0.37.0) on a dual-CPU Xeon workstation from HP. It wouldn’t run on that machine and the error log revealed that it had something to do with the CPU. We installed flawlessly on a number of other systems, including an older dual-CPU Athlon system. The good news is that this is the end of our bug report. Once the app was installed, we automatically downloaded the 2.2.1.2 update (8.7MB) from Pinnacle.

The integrated capture application is basic, but includes a solid scene detection feature. Once you’ve connected your DV camcorder to your machine, getting video onto your computer is very simple, since there are only a few friendly buttons to click. We encountered no problems with DV capture. As the app was capturing video, the preview of the DVD menu was being populated with image thumbnails, which were generated from the first non-black frames in a clip. This wasn’t perfect: the first non-black frame in a fade-in is still pretty dark. Importing previously captured footage, finished movies and digital still images was also easy.

We then clicked the second button at the top of the program to move to the Preview/Edit screen. Once again, the very small number of buttons, greatly simplifies the authoring process. The style chooser in the upper-left corner lets you choose from over 45 coordinated templates, many of which have motion backgrounds and music. Some of the looping material was a bit too short (20 seconds).


A remote control on the right lets you preview the behavior of the DVD, without switching into another mode. Along the bottom of the screen is an iconic representation of how full your disc is, based on the settings you’ve chosen. This all-on-one-screen authoring is very efficient and clear.

Like the other two screens (capture and preview), the burn screen is about as simple as it could be. Since all project settings (such as whether you want to burn a VCD or a DVD) are in a different location, when you get to the burn phase, there is only one button to click "Start." We clicked it and it burned a DVD. What more could you want?

The basic templates are easily customized. New backgrounds, background music and text can be added and adjusted. Motion buttons are not possible, but motion backgrounds preview in full-motion. The specific, individual positions of elements in the layout cannot be changed, but this is not all bad since this prevents you from positioning elements outside of the safe area masked on a television set. The screens for changing these elements are outside of the main workflow of the program and are not as well integrated, but they are definitely good enough. For example, the frame-forward and frame-back buttons are in an unusual arrangement (pointing up and down, instead of left and right), but since there are only a few buttons, you’ll figure it out pretty fast.

Configuring MPEG encoder settings is probably the most boring and technical aspects of DVD creation. Expression’s simplified Settings window is unremarkable, except for the very cool "Automatic" option, which will encode your video with the highest possible settings based on the amount of material you’ve imported. So if you have an hour of video, it’ll encode it at very high quality, but if you need to squeeze two hours onto a single disc, the Settings will compensate accordingly. Encoding at the highest quality levels was relatively slow (around 7fps or 400% real time), but we’re definitely willing to wait for a good encode: We were very pleased with the quality of Pinnacle’s encoder.

So, does Expression get a good review? We encountered just one major bug during our tests, so the answer is a qualified "yes." Granted, a high-performance dual-CPU Xeon system is not the typical system Expression will be installed on, so this isn’t necessarily a criticism of the program itself, but it does make us nervous.


Overall, we enjoyed the app. Expression balances ease of use with customizability very nicely in an all-in-one package that takes you all the way from camcorder to disc. Expression proves that DVD authoring doesn’t need to be complex and can actually be fun.