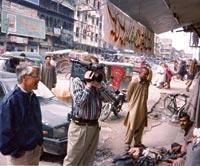 The best videographers combine structure and surprise in a coherent way. The structured part involves all that mundane stuff you do to get the job done. Structure involves knowing your purpose and knowing the audience, in addition all those technical issues like getting clean sound and proper lighting and controlling artistic elements like framing. Without structure and a commitment to getting the best audio and visual product, the rest is meaningless. Surprise is the unexpected element we allow into our frames or let our viewers discover – often as we did during the shoot.

I was in Malaysia on assignment when the Bali bombing crescendoed throughout the world in October 2002. An organization that provides aid in refugee camps requested that I travel to Indonesia and shoot some testimonials. Easy enough. I was probably the only American flying into Indonesia right then, but there was this fire in my gut urging me on. We drove out of the clogged-street city of Manado, Sulawesi and onto rugged dirt roads before I had a chance to catch my breath. The ride took us through lush mountainous terrain, past smoldering garbage dumps and oxen-drawn wagons to an isolated village – in reality a quickly assembled refugee camp. I had my gear and everything was set and ready. Only one problem: I didn’t have an interpreter.


Out of the corner of my eye, I saw a medical worker, an Australian. Perfect. Now I had my surprise, my focus and someone who spoke English. I’d tell my story through the eyes and hands of a medical team working in the camps. Think of it as "shooting from the hip." No script, no real way to prepare, just discover the story angle and develop it on the fly. Three days and five hours of tape later, I could edit this field exercise into a ten-minute promo to help the refugee agency, the medical team and, ultimately, the refugees themselves get their message to a larger world audience. I called it "From Heartbreak to Healing."

Let’s back into this case study to discover what made the production successful. The key structural elements were already in place, linked together in the backbone of the production: Purpose, Audience, Sound, Light and Composition.

I. Purpose: The purpose was to reflect a positive image of the work of refugee agencies. No one at the agency gave me this mission statement, but years of shooting promos and commercials told me that a clear purpose was necessary to focus the production.

II. Audience: The primary target audience was potential volunteers and donors. The secondary audience might be television news. This is all the information that the agency personnel provided.

III. Sound: The ambient noise in the camps dictated a wireless microphone setup. I had one that I could stick onto various medical workers as I followed them through their morning-to-night tasks. Going wireless also freed me to stand back for those key establishing shots or to be totally invisible to the subject, while still getting front-row audio discourse. There is no substitute for great sound. It is the bridge that carries the visuals to the eye and heart of the viewer.


Production tip: Carry loads of extra batteries. These wireless outfits start crackling when the battery power dips. I usually replace the batteries on the transmitter and the receiver each time there’s a problem. It’s just more efficient in the long run.


My primary camera is a Sony VX2000 which allows you to adjust the audio levels manually. This is an important feature to look for in a professional camera and is a lifesaver.

IV. Light: When you’re a one-armed paperhanger do-it-all-yourself videographer in the northern jungles of Indonesia, lighting is what you make happen by instinct. There was no assistant to adjust the barn doors for me. There was no electricity anyway. Most of the folks on-camera were dark-skinned with dark hair, another factor to be thought through.


This is where the low light capabilities of Mini DV cameras and tape really pay off. I avoided shooting towards the light as much as possible, working the geography to get the light behind me. I used the sides of buildings as on-hand reflectors, shooting my subjects from a side angle and never with a flat surface behind them.


My camera also has manual exposure so I could ramp up the light inside my camera. Manual exposure lets you set your aperture and gain so you can move from darkness to light without seeing the lens breathe. I also carried a battery-powered light affixed to my camera shoe, though I use it only as a last resort in documentary shoots like this one.


One strategy when shooting documentary style is to keep your subjects from feeling like they are on camera. This was particularly true in a refugee situation where people might have reason to fear both the media and discovery. Of course another facet is that the camera by itself attracts attention. Children come alive in front of it, sometime obnoxiously so. But they are also part of the story or maybe even the story itself.

V. Composition: Composition is the framing of the shot. This is so crucial: Framing is what separates the pros from the wanna-bees every time. As a matter of fact, I encourage would-be videographers to spend some time with still photography first. Each picture needs to convey something unique, or even tell a story. Go to your local bookstore and spend an afternoon pouring through the photographic books. There are hundreds of them ranging from travel books to photojournalistic essays and collections. Look through National Geographic. Some of those still photographs convey an entire story in a single shot.


You will notice that excellent photographs have only essential information in them. The framing accents the main concept. The viewer’s eye is drawn to discover the most relevant information. In regard to composition, there are a few things to keep in mind: