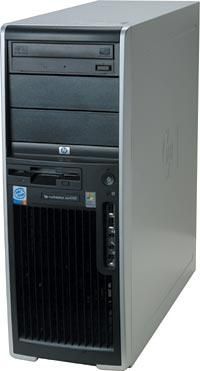 It used to be that we recommended two paths for video editors looking to buy a computer. We recommended that novices get a complete turnkey and avoid trouble. For those on a tight budget, but with some video experience and a streak of geek in them, we suggested configuring a system from off-the-shelf components. Now we have a third recommendation: the workstation. Workstations, such as the HP xw4100, are ideal for video editors who know what they need, but who also demand performance levels not guaranteed from the budget computers stocking the shelves of the local SooperMega Store.

We’ve been reviewing editing turnkeys at Videomaker for quite some time now, defining a "turnkey" as a computer that is ready to edit video right out of the box. The reason we emphasized turnkeys over more general-purpose solutions is that, in the past, off-the-shelf computers often did not have the muscle or disc space for dedicated video fanatics such as ourselves. We also like video turnkeys because companies that specialize in video typically match the hardware and software carefully.


Workstations are a little different, in that you generally need to configure them to a specific application. Still, the hardware used in a coordinated workstation is usually well matched, with good performance and, most importantly, excellent stability. And, since workstation builders can take advantage of an economy of scale, the price is usually quite good, even compared to what you might pay to build your own system from individual parts. So an insurance company might buy a workstation to crunch numbers and a design firm might buy a different workstation for 3D CAD, but both would end up installing their own mix of software to complete the package.

The xw4000 we wrote about in the April issue was a decent machine, but in our review, we noted that it could have been better configured for video. For example, we would have liked to have seen a large dedicated video hard disk and a DVD burner. HP really came through for us with the new xw4100 we received, including a new third generation 300i DVD+RW burner. Besides a generous 160GB system drive, we also found a 160GB dedicated video hard disk in the case. Unfortunately, the second drive had not yet been formatted and so was invisible in Windows. We discovered another hardware configuration anomaly: the HT (HyperThreading) feature on the motherboard was not turned on for the 3.0GHz Intel P4 CPU. We turned it on in the BIOS and then verified that Windows XP Pro could see the two virtual CPUs in the Control Panel. Not that we’ve seen huge performance gains from using HT in most applications under typical conditions, but it hasn’t hurt either. The only piece of hardware that videographers will not find useful in this machine is the professional NVIDIA Quadro4 3D graphics card. Yes, it may improve some 3D performance in some applications, but for most video work it will be irrelevant. We’d suggest that you save yourself $76 when you customize the machine unless you already know that your software will take advantage of this card.

The xw4100 performed very well in our standardized rendering tests, encoding 20.4fps of 2-pass VBR MPEG-2 video. This is almost 25% faster than the xw4000 and is much faster than you might expect if you simply compared the P4 processor speeds of the 2.8GHz xw4000 machine with the 3.0GHz xw4100. There are two primary reasons for this. The first is faster RAM. While the quantity of RAM was irrelevant to our tests, the xw4000 had PC2100 RAM that ran at 266MHz, while the xw4100 has PC3200 RAM that runs at 400MHz. The second performance booster is a faster FSB on the motherboard: 133MHz for the xw4000 and 200MHz for the xw4100. It’s not really important whether you understand all of this geek-talk or not. The point is that there is a lot more to a computer’s performance than just raw CPU/gigahertz numbers.

The DVD burner in the xw4100 is HP’s third generation 300i DVD+RW drive and can write DVD+R discs at 4X (using the proper media). We found Ritek 4X certified DVD+R media in 100 count packs for $2.29 as of this writing (similar DVD-R media was $1.69 each). DVD+RW media was cheaper, at $1.99 each. This is interesting because our tests have not revealed any compatibility differences between DVD-R and DVD+R, but we do prefer the rewriteable DVD+RW to the DVD-RW format.


For editing and burning, HP includes two fine consumer applications: ArcSoft ShowBiz and Sonic MyDVD. We have nothing but nice things to say about our experiences with these two programs and their behavior on this machine.

There were other indications that this was a well-designed and constructed machine, from the brushed aluminum case to the whisper-quiet ventilation fans. The xw4100 workstation is not specifically a video turnkey out of the box, but it is ready for you to install your video editing and DVD authoring software of choice. If you are a video novice looking for a machine to cut your teeth on, we’d still recommend you find a turnkey system from a vendor that specializes in video. If you are looking to upgrade from your first system to a more serious box and you already have a software suite that you are happy with, the xw4100 workstation is a fine choice.

It’s not a turnkey, but if you are looking for the hardware to match your software, this is a great workstation.