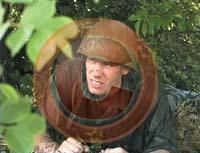 Footage of the People

As a beginner-beginner in home video, I enjoy and learn from the articles published in your magazine. Please continue to remember the "newbies " in future issues.


I am very interested in video documentaries concerning military history. Almost every one has segments of combat photography (films and stills) that I know were copied from the files stored in the US Government’s archives. Since this material is clearly in the public domain, is there a copyright problem if I use excerpts in one of my videos?

Government publications, in all forms (e.g. printed matter, audio recordings, photographs, film and video), are not protected by copyright. Therefore, anyone can copy works or portions of such works made by government agencies without permission.


A problem may arise, however, if you copy a copy of such a work. For example, although government employees may have shot the footage, a soundtrack (consisting of sound effects and narration) is often added later by a non-governmental third party. While you may have the right to reproduce the image, you probably will not have the right to use the soundtrack. Get the original footage or obtain permission to use the image and soundtrack from the person or organization that added the sound effects and narration. Of course, you can replace the existing soundtrack with your own soundtrack, as long as you do not infringe another party’s copyright rights.


I can foresee another potential problem. The party that broadcast or distributed copies of the footage may have edited the original footage. The act of editing, itself, can result in copyrightable material, for which you will have to obtain copyright permission from the third party editor. Even if you decide to edit the work further, you are still creating a derivative work — one derived from the copyrighted version and still covered by the copyright law.


The safest approach is to copy and, optionally, edit the original footage directly from the government archives.

Just before we went to press with this, the US Supreme Court ruled on a case that directly addresses copyright law and archival military footage. Without going into detail, the court basically verified what Mr. Levy wrote when it ruled against Fox in Dastar Corp. v. 20th Century Fox Film Corp., case no. 02-428.

See You On the Big Screen

Two weeks ago, I got the privilege of premiering my movie Flywheel at the Carmike Wynnsong 16 theater here in Albany, Georgia. Although the theater only agreed to show it for one weekend, they are now asking for a third straight week as it has been their second highest grossing movie this month (some $17,000 to date). I shot the two-hour project with a Canon XL1s Mini DV camcorder using a P+S Technik Mini 35 adapter and edited it on a Mac 1.42 dual processor G4 using Final Cut Pro 3.


The plot centers around a dishonest used car salesman who rededicates his life to God and returns money to the customers he cheated. After writing the script last Fall, I used members of my church to play the characters and local businesses and houses as sets. No one was paid. Every dime raised went toward paying for my equipment.


We shot the movie from November 22, 2002 to March 22, 2003. It was the hardest thing I’ve ever done in my 32 years. However, the plot has moved the audience to tears in every showing and the response has overwhelmed me. The local video store has shown interest in renting it, and the Carmike headquarters is now talking with me about showing it in more theaters.


I wanted to thank you for the valuable information Videomaker has given me. I am grateful for the wide range of articles and information you provide. Keep up the good work!