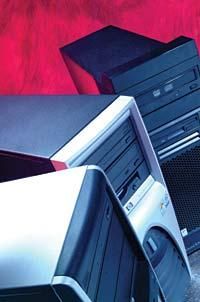 Once upon a time, those who would edit video on a home computer either had to spend time and considerable effort to configure a video workstation piece by piece or shell out tons of cash for a high-end, pre-configured system. Luckily, all that has changed. Inexpensive, easy to use video editing systems have become commonplace and even low-cost home computers can edit video. In fact, Apple and Windows XP computers all come standard with the necessary software to edit video. And while all Apple computers have had FireWire input for some time now, many Windows computers also come standard with FireWire today. Fast processors, plentiful RAM and huge hard drives all contribute to the wonderful state of modern computer editing.


Even so, would-be editors still face a bewildering number of choices. What platform should I buy? How much computing power do I need? Should I buy a new computer or do I just need a new hard disk?


In this article, we’ll show you what’s available in the turnkey video editing marketplace, from $1,300 desktop computers to $15,000 professional workstations. Whether you want to trim your vacation video or cut together commercials, television shows or even feature-length films, we’ve got what you need.

The least expensive turnkey video editing machines are found among the latest multimedia home computers, many of which come pre-configured from the factory with some kind of simple video editing functionality. Most, if not all, of the machines in this category use a FireWire connection to transfer video to and from the hard drive, which means they’re designed for use with a digital camcorder (Mini DV or Digital8). If you don’t already own a DV camcorder and want to edit video on a computer, consider making the investment. The convenience of DV and FireWire make it perfect for beginners. Some computer manufacturers offer package deals that include both a computer and a digital camcorder. Apple, for example, offers several Canon Mini DV camcorders that you can add as options when you configure an editing computer on their Web site. Although these solutions offer only the most basic editing software, even the most inexpensive are capable of turning out quality digital video.


Apple’s entry-level version of its popular iMac computer ($1,299) is a good place for novice video editors to begin. With an innovative design, FireWire port, 800MHz G4 processor, 60GB hard disk drive (HDD), 256MB of RAM, a 15-inch LCD monitor and the latest version of iMovie for editing, this computer is a popular choice. For an additional $500, you can upgrade to a 1GHz processor, 80GB hard drive, 17-inch monitor and a SuperDrive for burning your own DVDs.


On the Windows front, check out HP’s m260n Media Center PC for $1,898. Its features include a DVD burner, a 2.6GHz P4 processor, 512MB of RAM, an 80GB HDD, a 17-inch LCD, a television tuner and television out. This is a computer you could leave in your living room as an all-purpose family entertainment center, from TV to home video to music.

The $2,000-$5,000 price range contains the most interesting computers in our grid. In this area, you’ll find plenty of features and capabilities that you might find in a professional videographer’s edit bay, including more advanced editing software, bigger hard drives, titling and effects software and all-around better performance in terms of render times and graphics quality.


The heart of any editing computer is the Digitizer/Capture Card. You’ll see a number of interesting cards that offer analog input and output in addition to FireWire ports. Many of these cards also feature a selection of real-time effects and transitions. You’ll also notice that many manufacturers offer models for each of the popular cards. For example, DVLine offers a Canopus DVStorm 2 system ($4,799) or Matrox RT.X100 system ($4,299) with specifications that are otherwise similar.

Top of the Heap

Systems over $5,000 are most often found in corporate, educational or broadcast settings, and they offer faster render times (often to the point of becoming real time), more storage, professional software, nearly infinite upgradability and top-notch service and support from the manufacturer.


Macintosh-based production houses might consider a system from ProMax, such as the Kona-SD/RT ($14,445). The killer features of this machine include component inputs, SDI, uncompressed video streams and, of course, a 23-inch HD LCD panel and a Sony production monitor.


Broadcast professionals could do worse than a Safe Harbor Tsunami VT[3] machine ($14,399). Constructed around the legendary NewTek hardware formerly-known-as the Toaster, this machine sports dual-Xeon CPUs (that function as four virtual processors) and a couple of gigs of RAM in addition to a mind-boggling 780GB of disk space.


Of course there are a whole range of machines between $5,000 and $15,000 that should meet the needs of just about any professional, whether it is a one-person production house or a network affiliate. And, of course, these machines are infinitely customizable. Just give a manufacturer a call and see what kind of deal they can swing you.

So, which video editing system is right for you? The answer to such a question depends mainly on what you plan to do with your video editing system, how much money you have to spend and how much space you have. In the end, the chief reason why people buy turnkey video editing systems is simplicity. Unless you’re the kind of person who actually likes tinkering around under the hood of a computer, the turnkey video editing system is a great way to focus your time on what you’d rather be doing: editing video. And if these systems seem a little pricey to you, just remember those brave souls who, a few short years ago, used to make video without a computer, on tape-to-tape A/B-roll systems that couldn’t match the quality of today’s home computer systems, yet often cost several times as much. From the point of view of the video editor, it’s good to live in the 21st century.