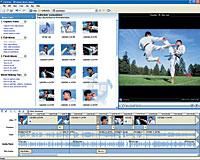 We’ve written in these pages about the wonderful result of competition in the world of editing software. Media Studio Pro and Premiere would not be the fabulous products they are today without the fierce rivalry between them. We can’t help but be concerned about the impact of a free product on the entry-level software market. Even so, it would be completely unfair not to assess Windows Movie Maker 2 on its own merits. For the novice shooter ready to enter the digital world, Movie Maker is a fine place to start.

We connected a number of camcorders to a new WinXP machine via FireWire and clicked through the text instructions listed on the left side of the Movie Maker 2 (MM2) screen. MM2 is mostly devoid of the cryptic-but-attractive buttons and icons often found in other applications. Instead, MM2 uses Web-style hypertext links. Want to capture some video? Just click the blue-underlined "Capture from video device" link. If you can browse the Web, you can capture video.

The capture process starts with a dialog box-based wizard which did a good job of getting us to the actual capture dialog. Unfortunately, you need to work through these three dialogs every time you want to capture. On the other hand, it didn’t require any configuration to work. Scene detection took care of splitting files into more manageable chunks and organized them into folders in the large graphical bin that dominates the program.

Editing starts with a drag-and-drop storyboard mode and then progresses to a simple two-track timeline mode. It was easy to add titles and they could be precisely positioned on their own track. There are a number of attractive and fun preset animations, but these cannot be browsed visually. The video special effects (such as the multiple aged film effects) were fun, attractive and previewed in real time.

We added music to our project with ease and briefly tested the narration feature, although there are only two audio tracks, so you can’t have both at the same time. The audio from source video files can be muted, but still occupy one of the two audio tracks.

We could adjust the overall volume of audio clips, but you cannot raise or lower the level of a clip over time, ramping it up or down.

The AutoMovie feature was fun. It wasn’t nearly as sophisticated as muvee AutoProducer, but we did get a watchable movie out of it in just a few seconds.

With only a few options, it was a simple and automatic task to send our finished movie back to our camcorder. MM2 lets you create video for distribution on the Web, via POPcast or Neptune Mediashare. You can even capture your DV video directly to the WMV format, which is a very convenient way to put your movies on the Web.

MM2 begs comparison with Apple’s iMovie 3, and although we like MM2, it isn’t nearly as good. Windows Movie Maker is not reason enough to spend $100 on a Windows Upgrade, but it isn’t a liability either.