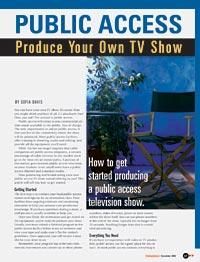 Your article on Public Access in the Dec. 2002 issue was short, sweet and simply stellar-just like the stellar opportunity of public access. I have had a show on MATA in Milwaukee (Amiable Dog Training with Amy Ammen) since 1994. I’m technically challenged and can’t properly express how fortunate I feel to have been nurtured by the staff and fellow producers. Thanks to their help, I overcame a lot of intimidation and still can’t believe I stuck with it. Since producing high quality videos from home is now easy and cost effective and, as the author pointed out, “the law no longer requires that cable companies air public access programs” I worry this may lead to the demise of public access stations. Public access hasn’t made me (or anyone else I know) a star, but it has given me a sense of accomplishment and gratitude. Long live public access and let’s hope communities demand support from the stingy cable companies.

After using DVDit! PE (Videomaker, January 2003) for a year, it was nice to see a professional level program mentioned and reviewed. Unfortunately, I think that the review contained several omissions. While I will agree that the user interface definitely has some quirks, the rest of the article seemed to stray from the facts.

Looking at the Strengths and Weaknesses, one of the highest strengths was missed – AC-3 (Dolby Digital) encoding of the audio. Without AC-3, it is impossible to get high quality DVDs in the 2-hour range. While many other programs can use AC-3, very few can actually encode it. Then you have a weakness “Won’t accept pre-encoded MPEG”. That is definitely a surprise to me as I always encode to MPEG 2 using Vegas Video and then import that MPEG file into DVDit! PE. It will readily accept MPEG files with or without audio (elementary streams) and will NOT re-encode the MPEG file.

Further in the article, you mention 12-bit, 32kHz source files. These are NOT standard DVD files and DVDit requires standard 16-bit, 48kHz files. I do not see this as a problem as this is a DVD standard.

As for the encoding time, I cannot comment on that as I always pre-encode using another program. However, for a two hour DVD build, it will take two to four hours to build the DVDmost of which seems to be the AC-3 encoding.

My one final complaint is the comparison of DVDit! with MyDVD. You are comparing a program that is well over a year old with the functionality of a program that is under six months old. The new features of MyDVD are slated to be included in the next release of DVDit! which will, hopefully, be released early next year.

While DVDit! PE may not be a great program, it is a very capable program with a few UI quirks and is not as bad as your review makes it appear.

You are correct that we overlooked DVDit! PE’s critical ability to encode Dolby Digital audio (AC3). We apologize for the omission. We have talked with Sonic about our other concerns and are excited about the future of this important product. We look forward to reviewing the next version.

I just read the review of Sonic DVDit! PE by D. Eric Franks. This review is right on. I have been in the technical support end of the computer business for more than 20 years and I have never been as frustrated by software as I have with DVDit! PE. There is no manual or tutorial that shows how to use the product successfully. The help files don’t. The Support section of the Sonic Web site is dismal; even the FAQs are so old that it should be embarrassing to Sonic.

I upgraded to Adobe Premiere 6.5 recently and put together a quick eight-minute video. It ran fine within Premiere in preview mode. I did not take advantage of the new Adobe feature “Export To DVDit! LE” as I already have the PE version. I did a simple menu and burned the DVD.

As in past attempts, the DVD audio is out of sync with the video. The 10-minute or so DVD created by Studio 8 worked fine.