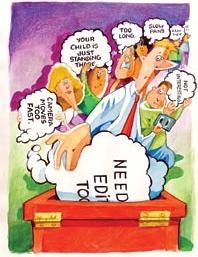 If you’re like most Videomaker readers, you make a lot of videos, and you probably think that they are pretty good. But what does the average person on the street think of your work? We took the liberty of asking some regular people what they think of the videos that their friends make. (By regular, we mean those who don’t make videos professionally but have had the pleasure of viewing hour upon hour of vacation videos, school plays and other monumental events captured on tape by their videomaking buddies.) Pay attention to what they had to say. Chances are, your friends may not have had the heart to say these things to you.

Question #1: What do you feel is the biggest mistake people make in filming a home movie?

"Moving the camera too quickly.It gives me motion sickness and there isn’t enough time for my eyes and brain to focus on any one thing." – Jill Alix, Ansonia, CT


"They go too fast from one thing to another."- Belinda Wexler, Toledo, OH


"Filming people who don’t want to be on tape. All you get is people mad at you." – Mary Binkowski, Bethany, CT


"They move too fast. In their minds eye, the person taping can see the big picture, and understand why they’re doing it, but the people who haven’t been there don’t see that." – Jack Kovalski, Tecumseh, MI


"Not enough editing. Most videos I’ve seen are very amateur and are uninteresting.I don’t have time to watch all the details highlights are best for me." – Amy Potokar, Westport, CT


"Not staying still on the subject long enough, moving the camera around too much. And tilting the camera when panning." – D.F. Duck, Glenn, CA

Question #2: Which events are least worthy of capturing on videotape?

"I like videos that portray people rather than things." – Alix


"The birthday parties people tape get kind of boring after a while." – Wexler


"Every single move your kids make. You end up with 1,000 hours of the kids doing the same thing!"- Binkowski


"I am usually held captive by my brother and sister-in-law, who force me to watch every move their little boy makes. That gets old really fast." – Kovalski


"Endless repetition – how many times do we need to see little Johnny standing in the outfield – and footage of unknown persons for more than a split second. If it’s not family, take one quick pan, plus one photo and label the names, because, inevitably, you won’t care what the other kids looked like in your daughter’s second grade class 40 years later. You’ll just want to see your kids." – Pagan


"I think most everything is worth videotaping, it’s just not all worth watching. Edit the video to only show the few minutes that matter, then your friends will enjoy it and will be more willing to view your home videos the next time." – Duck

Question #3: What is your definition of a good home video?

"I like to see people as natural as possible. When I catch my daughter singing or playing school, or my son focusing on his karate moves, to me, that is precious." – Alix


"Something you can save for later use – something that gives you a historical record of your family." – Wexler


"One that’s shot without people acting. One in which the people are natural." – Binkowski


"One that has proper lighting, doesn’t pan too quickly, isn’t boring and doesn’t drag." – Kovalski


"Subject matter of general interest to people other than the immediate family (no one but a mother could enjoy a 20-minute video of a toddler laying on a blanket). Or at least keep such video to only a few minutes." – Duck

Question #4: What is your definition of a bad home video?

"I don’t like to see people posing uncomfortably or a video that is too distant to make out people’s expressions." – Alix


"One that everyone looks into the camera and says ‘I don’t want to talk. I have nothing to say.’" – Binkowski


"Videos that are boring, pan too quickly and take a lot of time." – Kovalski


"Long static shots. Endless hours of other people’s kids in tutus or baseball uniforms. Watching people eat or talk without being able to hear them or see the expressions on their faces." – Pagan


"Out of focus. Quick tilted pans. Staying on uninteresting or non-action subjects too long" – Duck

Question #5: How long should a home video be?


"Ten to 15 minutes, but vacation videos are usually longer than that, because there seems to be a lot more going on." – Wexler


"If it shows action, like kids doing a sport, or an event like a music recital, then it can be longer, like 30 minutes or more. If it’s like a birthday party, it gets boring after about 10 minutes." – Binkowski


"Not more than five minutes – after that, I start to get a little restless." – Kovalski


"No more than two hours. Usually watching a home movie is at the end of a busy day and I fall asleep. It’s hard to sit for so long when there are other things that need to be accomplished at home and in the home office." – Potokar


"It depends. If it is a video you will be showing to friends then 10 to 15 minutes. If it is the video of the baby blowing bubbles or rolling around on a blanket and the parents will be the ones viewing it, then as long as the tape allows." – Duck