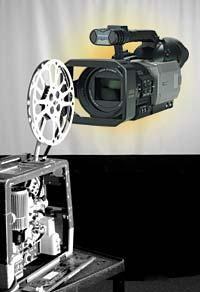 The Panasonic AG-DVX100 is a great camera. When we reviewed it, we loved the lens and the customization options. And, more importantly, we shot some great video with it. But when our readers mention this camera, they almost always want to talk about one thing: 24p. The question is: What is 24p and do you need it?

Aggressive marketing and popular discussion have created quite a buzz around consumer 24p. Before the Panasonic camera, some people advocated using a PAL 25fps system to get a film frame rate from consumer video. Unfortunately, many people seem to think that if they just shoot 24p, their video will look like film. Admit it though: We are all guilty to some extent of believing that technology can solve our artistic problems. As far as we know, there is no technology that can magically transform poorly shot footage into high art.


There are many reasons why film looks like film and video looks like video. For example, film cameras tend to have narrower depths of field, which gives the cinematographer greater artistic options. Of course the reason for this is that film cameras are much larger, tend to have better optical systems and, of course, cost a lot more. And film itself is more expensive. This tends to make filmmakers shoot much more carefully. And the people running film cameras have more experience than the average home video enthusiast. Is it really so surprising that film looks better than video?


All other things being equal, there are technical differences. Film has better resolution. Video has more color. And, of course, the frame rate is different. It’s not that film has a better frame rate, as some folks might want you to believe. In fact, video has better temporal resolution than film.

Film cameras sample the visual world 24 times per second. Video samples the world 60 times per second. This means that video shows motion much more smoothly and accurately than film. So why would anyone want to shoot at 24 frames per second (fps) on film? The subjective answer is that many people claim to prefer the look of 24fps over the higher rate of video. The real answer is not so simple.

Watch your Ps and Is

So it is obvious that the "24 " in "24p " comes from the frame rate of 24fps, but what about the "p "? The "p " stands for "progressive " scan and simply means that an entire frame of film is exposed every 1/24th of a second. For technical reasons dating back to the development of television in mid-1950s, video in the 21st century does not expose an entire frame of video at a time, but instead only exposes half of the frame for every sample. We’re not talking about the top half or the left half, but instead every other line is scanned (say every odd-numbered line) first and then the remaining lines are scanned (even-numbered lines). A half-frame scan (called a "field ") takes place once every 1/60th of a second and two together create a single frame every 1/30th of a second. "Interlacing " is the process of joining the two fields together.


So the difference between video and film is that "60i " video (60 interlaced fields per second) has a much greater temporal resolution than 24p film (or, by extension, 24p video). But each video field only has half of the resolution of a full frame, so there is a tradeoff in quality as well. Which is better? It depends: 24p video will certainly be sharper on the individual frame level, but 60i will show fast action much more accurately. 24p might be better for locked-down shots and talking heads, while 60i might be better for pans, zooms and football games.

The consumer 24p cameras from Panasonic capitalize on the fantastic success of the Mini DV format. Tape is (fairly) cheap and plentiful, so choosing this format for 24p was a great decision. But the Mini DV format is distinctly not a 24p format. So how does Panasonic manage this wizardry?


The NTSC DV format used in the United States (and elsewhere) matches the NTSC color television format, which means that it is a 60i format. For as long as film movies have been shown on television, the conversion from 24p to 60i, called telecine, has been a necessity. Over the years, there have been a number of solutions, but one of the more successful has been the 2:3 pulldown.


Here’s how it works in words, although a look at our diagram will make it much more clear. First, recall that we are transferring 24p to 60i, which means we are converting 24 frames per second into 60 fields per second. The first frame of film is transferred to the first two fields of video and the next frame of film is transferred to the next three fields – 2:3. This results in some frames of film spanning two different frames of video or, to put it another way, some frames of video that are composed of fields from two different frames of film. You might think that this would be a disaster, but it really works quite well in practice.


Panasonic has an Advanced mode that operates at a 2:3:3:2 pulldown. As you can see in our diagram, only one video frame in five is a mix of two frames from the film (as opposed to two in five for a 2:3 pulldown). Our diagram exaggerates the output frame mix with two radically different frames; in the real world, adjacent frames are usually much more similar to each other.

To Film or To TV?

You might think that shooting 24p would be a great advantage to indie filmmakers who want to transfer their video to the large screen. To some extent, that is true, but you can bet that the companies that specialize in transferring video to film will have no trouble with your 60i video footage anyhow: they’ve been doing it for years. Film transfers can easily cost $600 a minute, so we’d just as soon leave the process up to the professionals anyhow.


The real use of consumer 24p cameras then is for display on television. We like the look of 24 progressive frames on our televisions. 24p is only one small aspect of the legendary and ineffable "film look, " but it seems to be an important aspect nonetheless. A 24p camera will not magically transform you into a filmmaker, but the affordable option to shoot 24p is a wonderful development for consumer video.

In the end, 24p verses 60i isn’t what people are arguing about. 60i is better for football games, but don’t you just love the look of the games shot on film? And you can definitely see the difference between a live game and the special archival NFL Films footage that is still being shot to this day. There are many reasons why video is superior to film for NFL coverage, yet film is still shot right along side the video for one simple reason: we like the way it looks. That’s reason enough for us.

It turns out that a 1/24th of a second frame (with black between individual frames) produces a noticeable flicker when watching movies in a dark theater. To hide this flicker, the shutter on the projector in your local Cineplex opens and closes two or three times per frame, producing a flicker rate of 48Hz or 72Hz.