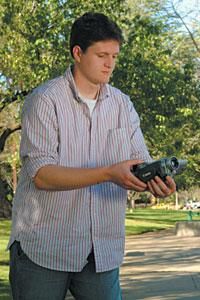 Unlike our counterparts in still photography, those of us shooting video have a wonderful advantage – motion. With some imagination, a steady hand and a good tripod, you can take your viewers on a great visual ride. Let’s review a few creative moves that you can all use to add interest in your videos. Keep these in mind as you plan your next project and work them in where they seem to fit.

Movin’ on Up: The Pedestal

The pedestal move is a great way to add some vertical action to a scene. It allows you to create some anticipation with a viewer, to add a greater sense of height and importance to a subject and to link more than one subject in a single shot.


A pedestal move involves moving the entire camera vertically. The move is named for the adjustable center post found on many tripods. Unlocking this center post allows you to raise the camera while the tripod legs remain in a fixed position. Not all tripods have a pedestal that allows you to make a nice, smooth move. In some cases a tripod isn’t practical, so you may make this move as a handheld shot.


The trick is to keep the vertical movement as steady as possible and to set your viewfinder before you start shooting. If you’re working with a camcorder that has a flip-out LCD screen, by all means use it. Try to position the screen so that you can keep the framing in sight throughout the entire shot. If, for example, you’re shooting a person’s foot and moving up the body to end on the face, here’s how to approach it. Frame up a nicely composed shot to start and check for clear focus. Since you’re starting at almost ground level in this example, begin from a bended knee position with the camera directly in front of you, elbows resting just above your knees. Slowly lift the camera with your arms and then begin to stand as you rise up through the shot. Keep your elbows tucked in as close to your body as is possible and practical, to help keep things steady until you reach your end position.


This move could be great at a wedding to reveal a bride’s dress. An example of linking subjects with this move might be starting on a full-screen shot of a house For Sale sign and then doing a pedestal up to reveal the home behind it.

Keep on Truckin’: The Truck Move

In a trucking move, you, the tripod and the camera pick up and move to the left or right. This move is great for following or creating a stronger sense of action. Let’s say you’re shooting someone jogging. If you just pan the camera to follow the runner, you’d need to be on a pretty wide shot, and there would be a pretty significant change in the backgrounds and perspective as you follow the subject left or right. It also isn’t as dramatic. Set up a trucking shot, and you’ll see the difference. Choose a distance from the runner, let’s say you want to keep him full-body throughout the shot, and set up alongside of him with good focus. Unless you’ve rented or purchased a Steadicam or some other kind of stabilizing gear, if you actually jog beside the subject yourself, the video will likely be unusable. You need some wheels! Without going to great expense, you can use an automobile, a wheelchair or a child’s wagon to provide your motion. Whatever you choose, be sure you have a partner to get you moving and keep you safe and stable while you’re shooting. If possible, start moving the camera first, then cue your subject to start running. Settle on a comfortable speed and nice framing. Lead room is important in trucking shots. Give the subject some space between his or her nose and the edge of your frame so it looks like you’re leading them and not trying to play catch-up. If you don’t like the profile you get from trucking right alongside the subject, pick up some speed and get ahead a bit. This allows you to see more of the runner’s face and changes up the background for some interest.

The flying camera move gives you an opportunity to take your viewer on a ride. Think of this as taking on the point of view of an insect moving in and around subjects. I started using this type of move when my oldest child was a toddler. Fly around at kid-level to make the viewer more an active part of the child’s world. Of course, it works for shooting adults, too.


Let’s say you want to capture some treasured moments of a child eating in a highchair. You might hold your camera at your waist with arms tucked into your stomach for stability. Begin the shot from behind the child, showing someone feeding the little one, then arc around the chair to the front. For more action, you could begin with the camera held high, coming down and around the chair. The opportunities with this one are endless. Picture a table with a great spread of food. The camera starts high, taking in most of the table from above, then sweeps camera down and runs the length of the table, flying past all of the treats. For a smooth move and good focus throughout the move, it works best with the lens zoomed out wide.

This move is one of the most dramatic, and it requires a bit of practice. Alfred Hitchcock made use of this camera move, and the film Jaws used a similar version of it. When done well, this move gives the appearance that the main subject is stationary as the background crashes in or flies away. Set the shot up by framing the subject with the lens zoomed out wide. Begin to dolly away from the subject as you simultaneously zoom in to keep the subject the same size in the frame. The optics of the lens provide a unique look. Timing is important here in matching the dolly speed with the zoom, but when it all works it leaves a very dramatic impression with a viewer. Try the reverse, as well, by dollying in while zooming out. Great moves with powerful results.

Walkin’ the Walk: The Walking Shot

This is a favorite of mine because it’s easy to execute and adds zip to a normally dry shot. Rather than a static shot of your subjects walking, move with them. For a shot of two people passing by from behind, hold your camera about waist-level with a wide lens and begin to walk ahead of your subjects. Cue your subjects to start walking and overtake you, entering the frame from behind, one on either side, and continue walking away. The reverse of this would be for you to begin walking backwards, cueing your subjects to walk toward you, passing you on either side as they exit your shot. You can give this last one an even more interesting perspective by zooming out as you walk backward.

[Sidebar: Easy as 1-2-3]
Unlike still photographers, videographers can move their cameras to create action or cover several focal points in a single shot. This means your composition – what you choose to include in a shot and where you choose to put it – will change as you move. It may help to think of every move that you make in three distinct parts.