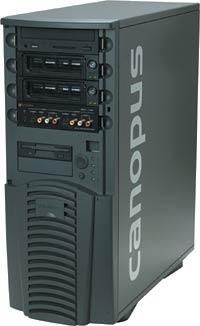 Until last year, there was only one way for Adobe Premiere DV editors to avoid rendering: get a Canopus card. And since Canopus had a lock on this market, real-time DV editing came at a not-unreasonable-but-relatively-expensive price. Thanks to faster computers, there are now a few competitors for Canopus, and this has this forced Canopus to improve our favorite real-time DV card. This review is really about two products: the DVStorm2 card and the RES-100 turnkey built around it by Canopus. If you are ready to move from a basic video editor to a more professional editing environment like Adobe Premiere 6.5, the DVStorm2 Plus is a fine value. And if time is money in your production work, real-time DV editing will definitely pay for itself many times over.

The actual DVStorm2 card is not significantly different from the original DVStormSE. The PC board is a newer revision, but the board’s layout and the actual chips on it are identical. This is not a bad thing: why mess around with a proven design? In fact, if you check out Canopus’ upgrade options, you’ll discover that you only need to buy new software to covert your DVStormSE to a DVStorm2. The newer card does have the StormEncoder daughter card (for hardware MPEG encoding) that was not included (but was available) with the older card.

Ultimately, as users, we don’t really care much about how the DVStorm does its voodoo, we only care about results. With updated drivers, Premiere 6.5, and a very slick looking black StormBay breakout box mounted inside one of the drive bays on the front of the computer, this is a very desirable package. The life support system for the DVStorm2 is the Canopus-manufactured RES-100 turnkey, sporting dual Athlon 1800+ CPUs, 160GB of dedicated video storage space, great dual monitor capabilities courtesy of an nVIDIA GeForce4 card and a Pioneer DVR-AO4 DVD burner. The 40GB system drive was loaded with WinXP Pro and After Effects 5.5, in addition to versions of ACID and DVD Workshop. Perhaps the best part of the system is that it has all been configured and installed by Canopus (including a robust 510W power supply), so it is almost guaranteed to be trouble free. Almost. We did experience two random crashes of Premiere 6.5 in our tests, possibly related to previewing, but we couldn’t recreate the problem. In both cases, Premiere simply disappeared. It didn’t hang, there was no Blue Screen of Death, we saw no error message before or after: Premiere just vanished into thin air.

Other than that Bermuda Triangle mystery, the DVStorm2 behaved just as we expected it would. We have used a DVStormSE in-house for editing for a number of years and our favorite turnkey from 2002 was a 1 Beyond system based on the DVStormSE, so we are very familiar with the product. It tends to be more responsive in Premiere than some other cards, especially when it comes to how quickly playback starts after your thumb whacks the spacebar. You can send DV video out to a camcorder directly from the timeline or watch previews on an external television monitor via the S-video ports on the card, all without any rendering. This makes Premiere 6.5’s new real-time preview features completely irrelevant. It also makes file size limits, and disk space in general, much less of a concern, since there is no need to render an entire timeline to a file.

Did we notice any performance advantages of the RES-100 turnkey over the DVStormSE system from 1 Beyond (which has similar specs, reviewed August 2002)? Quite frankly: No. The system pumped out a decent 10.10fps of MPEG-2 in our standardized VeRT MPEG-2 render test. It’ll encode video in real time (better than 29.97fps) to MPEG-2 using the Storm Encoder daughter card, so you might consider archiving a DV project to tape and then capturing the DV footage back in real time to DVD-ready MPEG-2. For a number of reasons, we recommend you use MPEG-2 as a distribution format and not an archival/source editing format. The Storm Encoder can, however, capture superior quality 25Mbps MPEG-2. This video will still need to be converted to a lower bit rate (roughly 8Mbps) for DVD video anyhow, but it is an option.

For current DVStormSE users, a software-only upgrade will cost about $149. Of course, DVStormSE owners will probably also want to upgrade to Premiere 6.5 as well (another $149). Is it all worth $300? If you are happily using a two-year old computer with a DVStormSE card, probably not. If you have a newer computer (the DVStorm2 requires Win2000 or XP), the improvements will likely make a difference. For folks who are looking to buy their first Premiere/real-time DV solution, we can definitely recommend the second generation DVStorm2 Plus that comes with the DVStormBay breakout box and Premiere 6.5 for $1,299. You also need to factor in a monitor, keyboard, mouse and any other peripherals you might need when considering this professional turnkey. If you want the security of a system right from the source with a one-year warranty (contact Canopus for details), the $4,999 RES-100 is a safe bet.

Videomaker has developed a standardized MPEG-2 rendering benchmark for objectively measuring the performance of a computer. While rendering speed is only one aspect of a computer’s overall performance, we feel it is a relevant test for videographers. Our proprietary test is a rigorous one based on standardized source material and involves a number of encoders. It is designed to assess both quality and speed, and is based on contrived artificial analysis and challenging real-world tests.

Instead of simply reading the raw numbers, you should instead use our figures for relative comparisons between the computers we review. The render speed (in fps) is, however, a realistic estimate of what you might see in actual real-world situations using a quality encoder. Encoders optimized for speed often easily double our frame rate numbers. Your mileage will definitely vary.