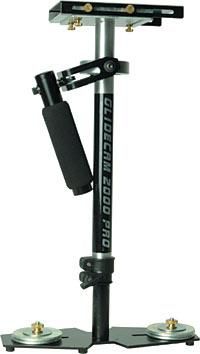 We regularly recommend that you bolt your camera down on a tripod and avoid moving it. No pans. No zooms. And, unless it is an emergency, no handheld shots. But we must confess that the slick camera moves that we see on the big screen are extremely seductive. If you have seriously determined that you need flying camera moves in your productions or you are frequently forced to shoot on the run (literally), then the reasonably priced Glidecam 2000 Pro is a great alternative to some more expensive products.

We tested the Glidecam 2000 Pro with a Canon GL1. While the Glidecam looks deceptively simple out of the box, it took us about an hour to get it set up. This is because you need to carefully balance the rig to get a level shot. The entire process is minutely detailed in the included manual with extensive illustrations on every page. It is not a complex process, but is one that involves lots of loosening here, tightening there and lots of tiny nudges back and forth. You cannot remove the camcorder from the plate quickly, and you need to balanced the rig again each time you reattach the camera.


Once mounted, the camera balances on a precision gimbal that allows it to freely float. A substantial amount of counterweights are then added to the base in the form of heavy washers. Even during setup, our arms were beginning to tire.

We first walked around the studio a little to get a feel for the product. We noticed that you can’t go low with the support without the handle bumping into the bottom of the camera plate; such contact will immediately ruin the shot. A strong arm is required. You have to hold the Glidecam handle with one hand, and with the weight of the camera combined with that of the Glidecam and balancing weights, our arms tired quickly. The base of the platform has rubber feet and is wide and stable enough to be used as a tabletop camera support, although it cannot be left unattended because it could easily be knocked over. We also noticed that if you are not very careful in the setup and balancing phase, the support rocks when beginning and ending camera moves. You can take seminars and courses to become certified as a Steadicam operator, and the Glidecam also requires some practice to learn how to use it. We flew around the office for about a half an hour before we shot any tape at all.


Next we scripted a simple walking camera move and shot it first by hand, trying to keep the camera as steady as possible. Then we tried the same shot using the Glidecam. As beginners, it took a couple of takes to get it right. During the shooting itself, we weren’t sure that the Glidecam was really doing much. We later realized that this was because our brains were concentrating on so much while taping (like framing and not tripping) that it is impossible to assess the Glidecam during a shoot. When screened on a television, we were blown away. The flying, floating footage was fabulous. It wasn’t perfect and the framing floated a bit, but it was not at all jittery. After an hour, we were convinced that, with more practice, this could be a fantastic tool for any videographer.


We tried some more complex shots, such as attempting to shoot someone as they walked along. Again, we specially scripted for both the actor and the Glidecam operator. Then the Glidecam person needed to practice the shot a few times. After a bit of practice, we pulled off the shot in only a few takes. Though it was not easy, we were able to perform a fairly convincing 360-degree camera orbit around a subject that would have been impossible to do smoothly by hand.

Did we mention that the entire rig is somewhat heavy? The GL1 and Glidecam totaled about six pounds together. This emphasizes our main point: the Glidecam is not a tool to use as your primary support. It won’t replace your tripod and it is too heavy to use continuously on long shots. You need to plan and practice your Glidecam shots. And this is how it should be. Gratuitous camera movements might be all the rage, but they can really contribute to viewer fatigue. In the right context and with a little practice, the Glidecam can produce some breathtaking video at a very reasonable price.

Supports cameras up to 6lbs