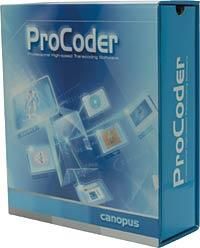 The art of the compressionist is an arcane one at best. For many, the final encode for distribution is an anti-climactic and tedious process. If you regularly need to process your video in multiple formats or have multiple files that you want to automatically encode to a single format, a transcoding application, such as Canopus ProCoder, is almost a necessity. This review is based on the 1.21.02 update from Canopus.

The problem is simple to state: you shoot, edit and archive in DV, but you need to distribute your work in a bewildering variety of formats. You need MPEG-2 to create DVDs for those with DVD players and MPEG-1 for a CD-ROM for those who don’t. You also want to distribute your video on the Web, so you need QuickTime for your Mac mates, Windows Media for your PC pals and RealVideo for your relatives. Oh, and you need low-bandwidth versions of each for most people, but also high-bandwidth for the lucky minority on DSL. All told, you might easily need ten distribution versions of your project.

You will certainly want to experiment with various encoding settings to maximize quality and minimize data rate (file size). Just as one example, when creating MPEG-2 video for your DVD, you might want to compare constant bit rate (CBR) video to variable bit rate (VBR) encoding at 5,000kbps, 6,000kbps and 7,000kbps for quality and compatibility. That’s a total of six files for one format. You will also want to do similar experiments with the other formats (e.g. Web-distributed). This is not some bizarre hypothetical dilemma we invented for this review: This is an everyday real-world problem .

The solution is a batch-encoding application like ProCoder. First, we imported our source video into the application. We then configured our encoding settings for each of the above situations. This required careful thought, but even a beginner could set up 20 or so encoding templates in an hour. Finally, we clicked the Convert button, drank a warm glass of milk, and went to bed, allowing ProCoder to do its thing. There isn’t anything magical about this process and it can easily take a few tens of hours to complete, depending on your source video’s duration and the speed of your computer, but it is all automatic. Then, all you need to do is analyze the final videos and select the ones that meet your needs.

Another common tedious encoding task is converting dozens of different media files into exactly the same format (for the Web, for example). First, you’d run your encoding tests, as we did in the previous section, and find the ideal settings. Then you can batch process any number of files by selecting them all and then clicking the Convert button. ProCoder also has a convenient little feature called Droplets which appear as shortcuts. All you need to do is drag-and-drop a single file, multiple files or even entire folders onto the Droplet and the encoding is automatic.

We found ProCoder to be very easy to use, with a well-designed interface, good feedback and helpful context-sensitive information in a panel at the bottom of the app. The 45-page manual and Help file adequately cover the basics. The ProCoder Wizard was so well done that it may be all many people ever see of the program.

This doesn’t mean that advanced compressionists will be disappointed. ProCoder exposes all of the more complex options to the end user, such as the ability to change the GOP for MPEG-2. Canopus includes a 200-page text titled "Video Compression Concepts" by Ben Waggoner, a renowned expert on the topic. About half of the book is about broad compression concepts and the other half details specific encoders and pragmatic settings options.

We didn’t perform exhaustive object analysis of the quality of the MPEG-2 encoding, but we did compare ProCoder with Cleaner 5.1, the Main Concept encoder and the Tsunami encoder (TMPGenc) and found that the subjective quality of all four was excellent, both in motion and when we isolated and magnified still frames. In our encoding-speed benchmark (which uses a one-minute source), Main Concept was the fastest, followed by TMPGenc and then ProCoder, but the difference was only a frame or two per second. Cleaner was typically twice as slow. Again, we wouldn’t put much weight in this comparison, partially because it is so difficult to level the playing field, but primarily because we are more than willing to wait a few extra minutes for the best quality. We can say that the encoding automation of ProCoder will save you many hours of time and tedium in the end. We can also say that ProCoder was the easiest of the three to use and had the best documentation.

We did experience consistent, repeatable crashes using the High-Speed encoding settings for MPEG-2 on a Windows 98SE machine. The free 1.2 update from Canopus, which temporarily broke the Wizard application (mysteriously resolved after five tests), solved this problem.

The Compressionist: A Clean Kill

Although Discreet’s Cleaner 5 is an excellent encoding product, we found ProCoder to be easier to use, faster overall and with quality at least as good, if not better. We didn’t directly compare PC-only ProCoder with Mac-only Cleaner 6. All we can say for certain is that ProCoder is one of the most powerful and easy to use products we’ve seen in a while and will become an indispensable part of your media suite from the first day you open the box.

For Wintel machines, this is the only encoder you will ever need.