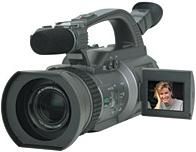 The GY-DV300U Streamcorder from JVC is a Mini DV camcorder aimed at serious videographers and built with controls that experienced hobbyists and professionals demand. Standout features include easy-to-access manual controls, two XLR audio inputs and a gorgeous picture delivered by three 1/3-inch CCDs. Combined with its included adapter (KA-DV300), the Streamcorder offers real-time MPEG-4 streaming capabilities, allowing you to broadcast live video worldwide over the Internet.

When we took the Streamcorder out of the box, the unit’s plastic look and feel surprised us. While the camcorder looks like a heavy-duty unit, its plasticy feel caused us to immediately doubt its capabilities and question its price. When we moved it from side to side, we heard a rattle near the front of the lens. The tape door and its mechanism swung loosely when ejected. Once we put it through its paces, however, the camera’s performance pleasantly surprised us. The rattling noise, which seemed to come from the camera’s internal optical image stabilizer, disappeared once we supplied power to the unit. We did encounter some mechanical problems with the tape eject/load mechanism (one tape got stuck in the slot of our first test unit) that caused us some concern as well, but the tape transport itself was otherwise fast and smooth. JVC sent us a replacement unit and returned our tape. We were not able to replicate this problem with the second unit.


The GY-DV300U’s strap fits nicely and securely around the hand and has a top handle that houses convenient secondary zoom and record controls for low-angle shots. Quick access to manual controls reside on the left side of the camera, while access to more advanced menu functions occurs through button-controlled menus on the unit’s backside.

With three CCDs and 525 lines of tested horizontal resolution, JVC’s Streamcorder produced a gorgeous image. The colors were vivid and sharp in both bright and dark situations. The detail was especially sharp when we shot closeups. The cam also has a LOLUX mode that allowed us to increase the gain without a lot of video noise. With this turned on, the unit captured excellent footage, with good color, in low-light situations.


The Streamcorder has a 14:1 optical zoom that performed quite well. It responded nicely to controls and was extremely quiet. On the front of the lens, a large focus ring moved smoothly and easily for manual focusing. The unit also has a one-touch autofocus button that we could engage when the camcorder was set to manual focus. The auto-focus adjusted nicely and held its focus to keep the intended image sharp without a lot of the focal drift common to some lower-end cameras.


The Streamcorder’s on-board mike sufficiently picked up sound. The unit also has two XLR inputs with independent manual and automatic gain controls for each channel. The mike-input placements represent a minor drawback since both sit toward the front of the camera and face forward. The "Mic 1" connection is above the lens, which makes it a distinct possibility that a cable could hang into the shot. The input for "Mic 2" is placed directly behind the lens hood. The position of this input caused the sleeve of the XLR connector to rub against the rubber focus ring. One of our wireless mikes had a long connector and would not fit into the "Mic 2" jack at all.


The Streamcorder has some special features of value for demanding users. For example, we found the dual-camera-setting switch quite convenient. This feature allowed us to have two different groups of manual settings (A and B), which we could access with the flick of a toggle switch. This would be ideal when switching between indoor and outdoor light, for example.


The camcorder switches between 4:3 and 16:9 formats, has internal SMPTE color bars, a neutral-density filter and zebra patterns. While we were thrilled with the robust manual controls, the Streamcorder can also run in full auto mode.

The streaming aspects of this camcorder are not afterthoughts. The package comes with a host of hardware accessories, including wireless PCMCIA networking cards (one for the camera, one for your computer), Ethernet cards, adapters and CAT-5 cables. The JVC Streamproducer software is simple to use and allows you to mix four sources (including video files) for broadcasting (e.g. streaming) over a LAN or around the world via the Internet.


One fun feature was the ability to control the camcorder remotely over the Internet through a Web interface. By logging onto the camera (theoretically from anywhere in the world), we could adjust the white balance, iris, shutter and zoom. One important aspect of the camera is that you can record full-quality video to tape while simultaneously streaming over the Net.


Getting everything running was relatively easy, but we must note that in order to stream over the Internet, you need to have the proper Windows Web server installed and running and you will need to have your ports configured correctly. This was not covered in depth in the included documentation, so you will need to at least know the lingo (http and proxy servers, IP, ports, DHCP, etc.) or have an IT person on hand to help you. This isn’t a Web cam; it is a serious tool for live Internet broadcasts and you should view it as such.

Despite our initial uneasiness with the construction of the unit, we were generally pleased with the performance of the GY-DV300 Streamcorder. Its picture quality and manual controls, especially when combined with the one-button autofocus and auto-iris, made shooting fun. Targeted to the professional videographer, the camcorder’s functions and features should appeal to someone who would use the camera to make money. The GY-DV300 merges a professional video camera with complete professional Internet broadcast capabilities, placing it in a category of its own.