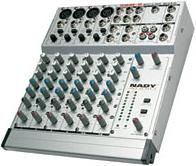 Eventually, nearly all video enthusiasts, hobbyist or pro, encounter a need for an audio mixer. Perhaps you want to capture a live performance that requires multiple microphones; or maybe you’re just tired of reaching behind the computer and plugging and unplugging audio equipment into your sound card. Whatever the case, we all have been there, or eventually will be. When that time comes, it’s good to know that there are solid, inexpensive mixers available to the budget-minded videographer.

Just recently, a new breed of inexpensive audio mixers became available – one that mimics much of the functionality of bigger, more serious mixers, yet doesn’t cost an arm and a leg. A prime example of this class of mixer is Nady’s SRM-8, an eight-channel mike/line mixer that features rugged construction, rackmountability, phantom power, LED level meters, two auxiliary sends, low-cut filters and three-band EQ for each channel.

On the surface, the SRM-8 seemed like a perfect solution for a wide range of hobbyist and professional applications. Yet, as one might expect with such an inexpensive piece of equipment, there were a few caveats. Still, the SRM-8 passed muster as a great first mixer, and could even fulfill some minor roles in high-end professional applications. Let’s take a closer look.

As with many compact eight-channel mixers, the SRM-8 has six rows of knobs four monaural, plus two stereo. The mono channels offer a choice between balanced XLR microphone inputs and balanced or unbalanced 1/4-inch phono plug inputs, while the stereo channels each offer a pair of 1/4-inch balanced or unbalanced phono plug inputs. The mono channels also offer low-cut filter switches, commonly used with microphones to eliminate low-frequency hums and wind noises, and trim knobs for adjusting the strength of the input signals to the overall mix. All of the plugs and connectors are of a rugged, high-quality construction.

Each of the six banks of knobs consists of a three-band EQ, Pre and Post Aux Send, balance (pan) and overall gain of the channel. Perhaps the weakest point of the SRM-8 was the low quality of these knobs and potentiometers (pots). They wiggle and had bit of play to them when adjusted, which may suggest possible problems after months of serious use. In fact, three of the low-cut filter buttons popped right off of the mixer without any special encouragement. Cheap pots are the bane of most low-cost mixers, and the familiar hiss and pop they produce when you turn the worn-out knobs indicate the main reasons why people are eventually willing to spend the money on higher-quality mixers. Of course, the brand-new mixer we tested did not exhibit any of these problems, nor can we predict whether they will eventually develop.

Other features of the SRM-8, such as the sturdy metal body, the LED peak lights and level indicators, and the aforementioned high-quality plugs and balanced microphone inputs are more rugged and should be capable of withstanding repeated use.

To test the SRM-8, we hooked up a number of devices. We plugged the stereo output of the computer’s sound card into one of the mixer’s stereo channels. We plugged the stereo output of a Sony Digital8 camcorder into the tape input (1/8-inch stereo mini-plug Y-adapter to two RCA plugs) and a Shure microphone into one of the mono channels. We also used an Alesis microphone preamp unit plugged into one of the auxiliary sends to enhance the microphone for rich, smooth voice recordings. The main output went back to the sound card’s stereo input, and we used a pair of headphones to monitor the sound. With this setup, it was a simple matter to record high-quality voiceover narration and add background music from the computer, either via CD player, MP3, MIDI or any other computer-generated audio. The sound passed through the SRM-8 was impeccable, and all controls were simple and straightforward. As mentioned before, the quality of the control knobs was at all times suspect, yet they never made a noise while being manipulated.

Such a setup may seem overkill for a home audio/video studio. Indeed, one wonders how many home studios would invest in a microphone preamp; yet one finds that it’s nice to have the capability to make such an upgrade when the time comes. Also, it’s good to have those extra inputs and such when you suddenly find you need them. This could be handy when you record a live musical performance. Given its small size and low weight, the SRM-8 seems well suited for such productions.

With the exception of the low-quality control knobs that may or may not cause problems in the future, this little mixer performed exceptionally well. A number of people involved in the test were surprised at the number of features it offered at such a low price, and proclaimed that they’d love to have one for their own uses at home. It is especially well suited for the video enthusiast who also happens to be an audio enthusiast. And ultimately, isn’t that what all video hobbyists should aspire to be?

A good mixer for multi-mike mixing and location shoots.