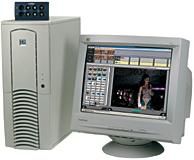 The Core Microsystems PHEnix Total DVD is a complete turnkey editing and DVD creation system intended for intermediate users. Priced just under $4,000, this unit comes packed with features such as real-time effects, MPEG encoding, and both analog and digital input-output capabilities. The most attractive feature of this turnkey is that it is a complete DVD-authoring package. Unfortunately, despite what you’ve heard, home DVD burning is still bleeding-edge technology and this system was a mixed bag of technologies overall.

The PHEnix Total DVD arrived with a 19-inch ViewSonic E795 monitor and a full PC tower that housed a dated 933MHz Pentium III processor with 256MB of RAM. Two 7,200RPM 40GB A/V drives chained into a speedy Ultra DMA 100 RAID were overkill for 25Mbps DV data, but you’ll never hear us complaining about anything being too fast. The Matrox G550 32MB Dual-Head display card is one of our favorite additions to any editing system, and it worked harmoniously on this one. The double heart of this turnkey though was the Pinnacle DV500 PLUS and the Pioneer DVR-A03 DVD-RW drive. Windows 2000 Pro proved to be a stable environment for an extensive array of fully installed software.

After an easy, effortless boot-up, we decided to test the real-time rendering capability of the turnkey with Adobe Premiere. Using a JVC-DVL 9800 camcorder, we captured footage using all of the various input jacks on the DV500 PLUS, which worked uniformly well (composite, S-video and IEEE 1394). We especially appreciated the convenience of the analog inputs on the breakout box.


Pinnacle transitions and a small number of video filters happen in real time with the DV500 PLUS. The Pinnacle transitions worked exactly as advertised in real time, displaying full-frame rate and size on our NTSC television monitor via the S-video out from the breakout box. However, when we changed the project properties to output DV to a DV camcorder, everything needed to be rendered.

Transcoding our final 10-minute project to MPEG-2 using the included Pinnacle encoder took just under 25 minutes, and the final quality of the video, although good, had a few noticeable artifacts, which we considered average for MPEG-2.


We then created an interactive DVD using the Pinnacle Impression DVD Pro 2.1 software. We imported the MPEG-2 footage and then placed it into a timeline that allowed for menu creation as well as chapter marks. After setting the chapter marks, we imported an image file and linked appropriate portions to the chapter marks to create menus. After previewing the project, we set out to burn the DVD. This process was aided by a step-by-step, illustrated "Users Guide for Creating Finished DVDs" manual provided by Core Microsystems, which was easy to follow. We used Impression to build a proper disc image, but the app did not include a DVD burning utility, so Prassi PrimoDVD was included to do the actual burning. This required manually inserting all the necessary files into a data DVD project. The disc we eventually burned with PrimoDVD did not play in any stand-alone DVD player we tried.


We then tried the other DVD-authoring application installed on the system from Sonic Solutions. One convenient feature of Sonic’s MyDVD is that we could import our DV AVI files into the application without first encoding the files to MPEG-2. In this test (but not in others projects we’ve done with MyDVD in the past), the quality of the resulting video was distinctly worse than the encoding we did with the Pinnacle encoder in Premiere.


Another convenient MyDVD feature is that you can burn your DVD with just a few menu clicks. From our raw DV AVI footage to a finished DVD, this application did it all. Our tests with the resulting disc were fantastic, with all of the stand-alone players recognizing and immediately playing the disc without hesitation.

The Core Microsystems PHEnix Total DVD is a well-designed turnkey. The software bundle was ample and remarkably easy to learn. The real-time features for analog video were good and the render times for DV and MPEG were fast for a PIII computer. We loved the Matrox G550 Dual-Head display card and sharp 19-inch ViewSonic monitor, but we only got one monitor at this price. The dual-capable motherboard was great, but it only had one PIII 933MHz CPU. The non-optical mouse and average sound card failed to impress us the way the UDMA100 RAID did. And the DV500 PLUS is still a fine capture card, despite not being the latest and greatest anymore. The ultimate test, could we create valid DVDs for our stand-alone players, was a qualified success. This is no small feat and is a great compliment to this turnkey, since we have had much more limited success with some other systems we have seen.


All in all, this would be a great bargain system if it were available at a bargain price. Core Microsystems has a host of configuration options on their site, so configuring the perfect system should not be a problem.


Did you find this article helpful?