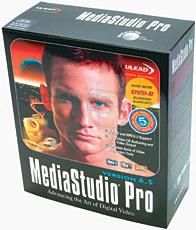 If you ever need proof that competition is healthy for the video capturing software industry, look no further than the running battle between the major video-editing players. New versions are released within months of each other and just when the faithful have crowned their personal favorite the new "King of Editing," the competition fires back with something that tops it.

As DV hardware has matured and standardized and hard drives have sped up, the once nightmarish process of capturing video is now almost an afterthought. We installed MediaStudio Pro 6.5 on a 900 MHz AMD Athlon system with an OHCI-compliant IEEE 1394 card and experienced nothing unusual. The new version of MediaStudio Pro brings some nice new features to an already well-integrated tool, including improved batch capture, scene detection and seamless capture. We’ve played with a few editing applications over the years, so we know how to intentionally cause problems with capture applications. We got out our cruelest DV test tape, which includes changes in audio format and lots of breaks in the timecode, both of which have caused problems in other capture applications we have used in the past. MediaStudio had no problem with the strange audio changes and the robust batch capture gracefully handled the breaks in time code.


Seamless capture was the next feature we wanted to try. We selected the appropriate option in the capture dialog and it worked as advertised. After an hour of completely unattended DV capturing, we came back to find three 4GB files and one 1GB file saved to disk and added to the Video Editor’s Production Library, ready to go, with nary a dropped frame. Sweet.


Scene detection was our next mission. The video capturing software documentation lists this feature as part of the Video Capture application, but it can also be carried out in the Video Editor. It worked flawlessly, breaking the four large clips up into numerous individual scenes, each represented by thumbnails in the Production Library. Our only criticism is that scene detection is not turned on by default and the option is not terribly easy to find in the Preferences.


We did experience some quirky screen redrawing problems in Video Capture (and Video Paint) and the scene detection dialog when switching out of MediaStudio Pro to another application and back again (probably related to our ASUS V7700 video display card). It’s a good idea not to do much else with your computer while capturing anyway, since performance is so important. Happily, this was merely a cosmetic issue, no frames were dropped and performance was otherwise unaffected.

The editing environment is full-featured and stable. In our test, timeline operations were fast and the thoughtful shortcuts made editing precise and efficient. Even redrawing thumbnails on the clips was almost instantaneous. Our multimedia computer was loaded with plug-ins from other companies and both video and audio effects were automatically detected and made available.


Most applications require some type of render before previewing, even for the simplest edits (Vegas Video is a notable software exception). MediaStudio Pro 6.5 promised to "play back a project in real time, without having to render preview files," which had us understandably excited. Not only did we get instant playback under normal situations (cuts, cross-fades and dissolves), but our mid-range 900MHz Athlon system allowed us to preview a project with a fancy 3D video filter, a picture-in-picture overlay following a motion path and a crawling title with a drop shadow, all in the same sequence. Of course, it didn’t produce a full-quality preview, but the 360×240 preview window was sharp, clear and had a decent frame rate. Our only criticism is that this feature was, like seamless capture, not turned on by default.


The final editing feature we tested was the crucial ability to view our timeline preview on an external television monitor. In the past, this meant rendering the project, recording it to tape and finally, watching the tape on a television. While scrubbing, MediaStudio Pro now outputs DV video data to your DV camcorder and then to your television straight from the timeline, without a formal render.

MPEG-2 encoding has been a feature of MediaStudio Pro for quite a while now. Rendering and variable bit rate encoding using the Ligos encoder took only about twice real time on our system and the quality of the final file was as high as any we’ve seen.


The new version also has DVD authoring and burning capabilities. The simple DVD authoring wizards/templates were easy to use and were a cute little extra in an already loaded feature set, but for anything serious, we’d certainly want to get a dedicated DVD authoring program.