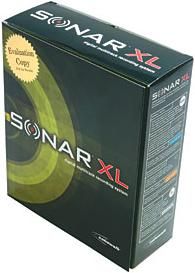 Sonar from Cakewalk is literally "all things digital audio." Full multitrack audio recording, editing and mixing, as well as loop-based and MIDI sequencing music composition. With its gaudy icon-strewn interface, this program attempts to (and succeeds in) incorporating all areas of the aforementioned audio disciplines and looks downright handsome after a little quality courting.


Sonar is a valuable tool for the audio professional who needs full-production studio functionality crammed in to one PC-based software solution. It also deems itself worthy of a look-see by the digital video enthusiast that wants to expand creatively in audio production. For the moderate list price of $479, Sonar offers a fathomless array of functions and plug-ins you never thought you’d want or need.

Cakewalk software from Twelve Tone Systems was one of the first to use the Windows OS for MIDI (musical instrument digital interface) sequencing. When most of the reputable MIDI musicians were only using Mac-based software solutions, Twelve Tone stuck to its controllers and stayed with the PC. Cakewalk then became Cakewalk Pro Audio, adding digital-audio editing to the MIDI environment and ended its reign with version nine. Sonar is the heir to that throne and promises to be a worthy successor. Now that new audio and video media solutions have flooded the market with PC products, it’s nice to know that there is a veteran out there engineering some innovative software with 10th generation experience.


The trouble with trying to review a product as deep and fertile as Sonar is that it is impossible to experience all that it has to offer and judge it on those merits. What we can do is focus on our typical requirements getting a particular set of tasks done and seeing if it’s a program that we would incorporate into our editing setup.

Editing and mixing audio is not entirely intuitive with Sonar. Some of the simple edit functions seemed a little awkward at first, but after one project we adapted to the application very well. Just finding the icon to set up the edit mode we wanted was half the battle. We recorded a voice-over for a 30-second TV spot and chose between three takes in which we liked some portions of each. We decided to compile our final spot by quickly editing from the best of our takes. Initially, we thought we were just overlooking some incarnation of a razor tool to cut up our vocal tracks within the icon clutter. But after consulting the help files, we found that a right mouse click was needed to split tracks; we could get used to that. In short order, we had our composite voice-over track with edge-crossfades between the spliced together words from the various takes something that can only be done in a sample accurate (1/48,000 of a second in this case) editor like Sonar.


Using the Video View feature, we opened up a rough cut of our video in Sonar. Now we could play back our VO with our video and add music from our buyout library. Sonar’s mixing tools, which feature a slick mixing console, offer lots of dynamic and equalization plug-ins that sound great. You can automate a mix with faders during playback or with volume and pan envelopes.

Loop composing with Sonar is not quite as easy as it is with some of the other, more popular loop-based programs. Control over the parameters in Sonar’s loop construction window is significantly more advanced. Incorporating loops into a sound design where non-loop material like voice or sound effects reside is an important feature. Map out the tempo graphically in Tempo view to get timing and pitch shifting to match the pre-recorded material key. To get the user started, Sonar includes quite a few very usable loops, but the good news is that the program fully supports ACID loops, so if you have invested in ACID loops you will be able to use them here.

For users who want to create more than just loop beds, Sonar boasts top-notch MIDI functions. Anyone with a keyboard controller — a musical keyboard with MIDI in and out can have a virtual bank of included software synthesizers at his disposal. DXi, which stands for "DirectX instrument," has several classic multi-timbral soft-synths, giving you analog synthesizer, guitar amp emulation and full-ensemble sampled instruments. You can perform extreme editing to MIDI performances so even a minimal amount of keyboard ability can result in some impressive musical compositions. Musical notation input, including voice information assigned to MIDI instruments, is possible.


While Sonar is made for advanced audio users, it still can serve as a valuable addition to the intermediate video suite for those brave enough and creative enough not to be frightened off by its depths. Although the icons are plentiful, the sections are all dockable so you can customize the workspace to your needs. What Sonar gives up in the elegance of simplicity, it makes up for in the ambition of doing it all.

Plug-in for: Premiere 5.0 or MediaStudio Pro 5.2 and above