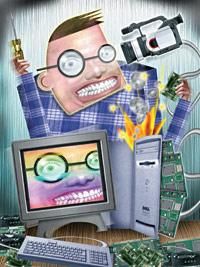 If you’ve ever tried to install a video digitizer card into a PC, you probably already know the frustration that was the impetus for this article. IRQ conflicts, driver updates, compatibility issues it’s enough to make even a seasoned PC hardware veteran tear his hair out.


So, why are there so many problems associated with installing video digitizer cards into PC slots that were, after all, designed to receive them? In this article, we’ll attempt to sort out some of the confusion, and hopefully help remedy some common problems associated with creating your own PC-based editing system. Note: we’ll focus on systems that run on Windows 95, 98 and 2000; NT and ME users will find the information in the article useful, but the step-by-step instructions will need slight modification. Apple Macs are not immune to these sorts of problems but typically come configured with FireWire ports at the time of purchase. Windows machines that are purchased with FireWire cards already installed will not likely have IRQ conflicts straight out of the box.

The first thing to do when installing a video capture card into a Windows-based PC, is visit the manufacturer’s Web site and download the latest version of its drivers. Drivers are the bits of software that tell the operating system the specifics of how to operate the new device you’ve installed into your PC. Why doesn’t the driver disk that comes with the product contain the finished, complete drivers for your hardware? There are several reasons. Primarily, it’s because the PC hardware world is very diverse, and the programmers who write the driver programs must consider a wide variety of different video cards, sound cards, motherboards and other devices that may or may not be present in the customer’s computer. Further, new hardware is always coming out, often after the capture card was originally shipped, that may interact with the drivers and the capture card. The manufacturer’s newest driver is likely to contain solutions to all of these problems.


When you pay a visit to the manufacturer’s Web site in search of drivers, you’ll most often find them under the Technical Support portion of the site or perhaps under a portion simply labeled Drivers. While you’re there, it’s a good idea to check and see if your particular product has any documentation available; often, you can find a list of known glitches and specific hardware conflicts on the manufacturer’s Web site.

You may be familiar with IRQ conflicts. An IRQ is an Interrupt ReQuest your computer’s way of handling data traffic between the various pieces of hardware installed on the motherboard. Generally speaking, each piece of peripheral hardware you install into your computer occupies a single-numbered IRQ. For example, the computer I’m using to write this article has the following: two serial ports assigned to IRQs 3 and 4; a floppy disk drive on IRQ 6; a printer port on IRQ 7; a USB port on IRQ 8; etc. When you buy a computer, it usually comes with at least two or three pieces of hardware, each of which occupies its own IRQ. Some IRQ numbers can be shared by a number of different devices.


Sometimes, when you install a video capture card, the system assigns an IRQ number to the card that’s already being occupied by another piece of hardware. If you install a card into your PC, and it doesn’t work right away, here’s how to check for an IRQ conflict:

1. Right-click the My Computer icon on your desktop.


2. Click the Properties option on the pop-up menu that appears.


3. Click the Device Manager tab in the System Properties window.


This displays a list of all the hardware that’s connected to your computer’s motherboard. After you’ve installed your capture card, check this list to see if the IRQ number assigned to it is the same as another piece of hardware in your system. Sound cards and video display adapters are a good place to check first; these often have conflicting IRQ assignments that need resolving.


If there is an IRQ conflict, you can probably resolve it by performing the following steps:

1. Right-click the My Computer icon on your desktop.


2. Click the Properties option on the pop-up menu that appears.


3. Click the Device Manager tab in the System Properties window.


4. Click your video capture card on the list of devices that appears; this will probably be under the Sound, Video and Game controllers item, which you may have to expand.


5. Click the Properties button on the bottom of the screen.


7. Click the Change Settings button, then select a new unused IRQ for your card.

You may find that when you click the Change Settings button, you get a message stating that you’re not allowed to change the settings for this resource. If this is the case, more drastic measures may be in order (detailed in the next section below).

Often, the only thing you can do to remedy your digitizer installation problem is to uninstall and reinstall the product.


Start by removing the software drivers for the product. Check first to see if the manufacturer included its own uninstall software; this will usually be found in the Start menu. If there is no uninstall software present, click the Start button, then Settings, Control Panel and Add/Remove Programs to find the software that was installed with your hardware, click to select it, and click the Add/Remove button to get rid of it. To remove the hardware drivers, follow the steps outlined above concerning checking for IRQ conflicts, but as a final step, click the Remove button. You may need to restart your computer after you remove the hardware drivers.


Once you’ve removed your hardware drivers, turn off the computer for at least 10 seconds, then get the latest copies of the driver software ready, reboot and re-install the product.


Still not working? Try this as a last-ditch effort. Go through the steps outlined above to remove the software. Then turn off the computer, unplug it, open the case and carefully remove the card from its installed slot. Reinstall the card into another available slot, even going so far as to exchange it with another card, and then re-install the driver software again from scratch.


If that doesn’t work, get ready to spend some quality time on the manufacturer’s tech support line.

Many video digitizer cards come with audio capabilities built in. This is nice if you don’t already have a sound card, but if you do, you may end up with a conflict between the two pieces of hardware.


Here’s how you can avoid the problem. After choosing Start, Settings and Control Panel, you’ll find an icon labeled Multimedia. Double-click this icon, then select the Audio tab at the top of the window, and you’ll see two boxes one for Audio Playback, and one for Audio Recording. A pull-down list under each heading allows you to select the device you want to use for recording and playback. For best results while editing video, select the audio from the digitizer card; this will help ensure good synchronization and minimize the chances of a hardware conflict occurring.

Fortunately, if you own a newer computer, have a DV or Digital8 camcorder and you wish to go the all-digital FireWire route, your chances of success are much greater. Here’s why – IEEE 1394 has become a standard serial data protocol in the last couple of years, and computers are built to work with it without a lot of fuss. One thing to be sure to look for is IEEE 1394 cards that are OHCI compliant (Open Host Controller Interface ). These cards follow a standard that helps ensure compatibility. Your operating system is also important in this case, with Windows 98SE being the minimum requirement to follow this standard.


In the end, newer computers with newer motherboards and the latest Windows operating systems generally have fewer IRQ problems if the motherboard assigns IRQs automatically. But that may be a small consolation if your machine is a few years old. If you find that you’re still having problems, you can always drop back and punt. Take the system down to your local PC repair shop and let them install the card for you. That way, you can sit back, relax and plan your video edits while somebody else cuts up their knuckles and curses at the manufacturers.